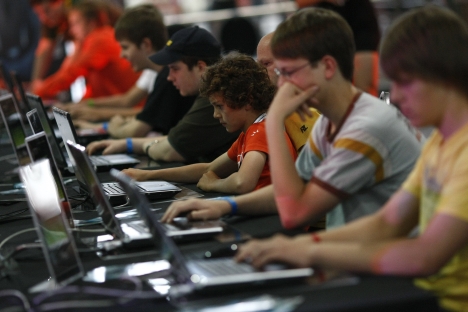 Russian authorities is drafting the "Concept of Legal Regulation of the Internet." Source: Reuters / Vostock Photo

Personal data protection, intellectual property rights, e-democracy, the fight against cybercrime, and the rules of self-regulation for social networks are just some of the issues to be addressed in a concept for the Internet regulation drafted by Russia’s executive branch.

The "Concept of Legal Regulation of the Internet" was drafted by the Presidential Executive Office, with input from a number of State Duma deputies. The document is intended to form the basis of the new Internet Law.

United Russia deputy Robert Schlegel, a co-author of the concept who sits on the Committee for Information Policy, Information Technology and Communications, noted that it had yet to be finalized. He stated that the document was a starting point for further discussion, rather than a finished article.

The text of the concept is divided into several chapters.

The first outlines the reasons why Russia urgently needs to draft legislation to govern online activity. For example, the document notes that "current procedural legislation does not provide for the use of the Internet in respect of legal proceedings, and does not recognize the evidential value of e-documents signed with electronic signatures, as in the case, for example, of agreements signed remotely via the Internet."

In this regard, the concept highlights that "the framing of online regulation proposals should involve the authorities, the business community, civil society organizations, and citizens."

The purpose of the bill, as presently conceived, is not only to "ensure the rights and freedoms of citizens online," but to "overcome the digital divide," "provide conditions for non-discriminatory online access throughout the Russian Federation," "expand the use of electronic communications, e-commerce, and other commercial activity," "protect personal data and information in accordance with the law of the Russian Federation," and "reduce administrative barriers and restrictions in online interaction between the state and society."

The proposed measures are also intended to fight cybercrime and bring Russian legislation in line with international conventions.

Subsequent parts of the document set out the core areas to be regulated by the new legislation.

The first task for legislators is to understand key online terms and concepts in a legal context. According to the authors, the legislation requires a conceptual framework that "reflects the specific nature of the interaction of all online parties and establishes the legal status of the main technological, informational, and infrastructural elements of the Internet, including information aggregation and processing, storage, file-sharing, websites, addressing, and hosting."

Once the conceptual framework is in place, it remains to determine the territorial jurisdiction of Russia in respect to the Internet (i.e., which sites are subject to Russian law, and which are not), and the extent to which Russian legislation will conform to international rules in this area.

A separate body of law will regulate the use of electronic signatures, electronic payments, advertising, search engines, and social networks.

Schlegel emphasized that, in the case of social networks, most issues will likely come under the purview of self-regulation.

"The law will have to stipulate who is responsible for what and, for example, in the case of cybercrime, self-regulation will not suffice. But, in regard to social networks, it is not feasible to enshrine all scenarios in law, and not everything needs to be described, so some of it can be self-regulated," said the United Russia deputy.

Other areas to be regulated are the question of copyright and intellectual property rights, the establishment in law of the concept of an "open license," and the issue of how to protect personal data. The law will prescribe liability for online crimes, as well as mechanisms to combat spam, fraud, and improper advertising.

One final area that the authors of the concept deem necessary is a "description of the mechanisms of the Internet to ensure e-democracy, e-voting, citizens' involvement in public administration and municipal government, and citizens' participation in deciding matters of social significance."