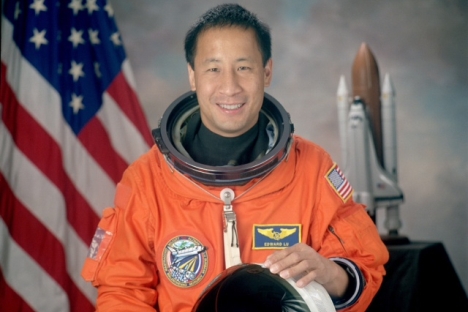 Former NASA astronaut Ed Lu: "It is true that none of the asteroids that have been spotted have a high probability of hitting Earth." Source: NASA

Dr. Ed Lu talked to RBTH about how to prevent meteor scenarios much worse than Chelyabinsk.

Former NASA astronaut Ed Lu: "It is true that none of the asteroids that have been spotted have a high probability of hitting Earth." Source: NASA

In the wake of last Friday’s unexpected guest from outer space — the meteor that exploded over the Russian city of Chelyabinsk in the Urals Mountains, RBTH reached out to former NASA astronaut Ed Lu. Lu flew three space missions on both the Shuttle and Soyuz spacecraft. He spent six months on the International Space Station along with the Russian astronaut Yuri Malenchenko in 2003.

Dr. Lu also happens to be leading the first-ever private effort to build a deep space telescope to help prepare for dangerous asteroids and meteors. “The meteor explosion over Chelyabinsk is a wake-up call that the Earth orbits the sun in a shooting gallery of asteroids, and that these asteroids sometimes hit Earth.  We send our heart-felt wishes to everyone in the Chelyabinsk area, especially those injured, and their families,” Lu said.

On Monday, Russian scientists were studying more than 50 fragments of the 10-ton meteor, which shattered 200,000 square meters of glass in the city, injuring more than 1200 people. The Chelyabinsk blast was unimpressive when compared to the famous 1908 Tunguska meteor, which completely leveled a remote area of Siberian forest the size of the Washington metropolitan area.

But the fact that no one spotted last week’s Chelyabinsk meteor is deeply troubling.

Dr. Ed Lu: It is true that none of the asteroids that have been spotted have a high probability of hitting Earth.  But we have found and tracked less than one percent of the asteroids that could be a threat and that are larger than the one that hit Tunguska. The big threat is that we simply don't know anything about the other 99 percent!

RBTH: Your foundation is preparing the first privately funded and operated deep space mission to protect the Earth from asteroid threats. Are you on track to launch your “Sentinel” telescope?

E.L.: Yes, we are making very good progress towards a 2018 launch.  Last January Ball Aerospace dedicated their new facility in Boulder where “Sentinel” will be built. The B612 Foundation has undertaken this project as a non-governmental initiative, somewhat akin to a growing number of private space ventures originated in the past few years.

The foundation, however, is not undertaking this project for profit; we are a non-profit corporation. Our motivation is strictly to ensure the survival of life on Earth – all of it.

RBTH: When it comes to protecting the Earth for space threats, what are the main differences between B612’s space telescope “Sentinel” and existing scopes, such as NASA’s Wide-field Infrared Survey Explorer which was launched on December 14, 2009?

The reason “Sentinel” is so much more effective is that it will be placed in orbit around the sun, but interior to Earth's orbit around the sun.  From there it will be able to scan outwards continuously looking away from the sun.  Secondly, “Sentinel” is an infrared telescope, and asteroids are best observed in infrared because they are very dark and don't reflect much visible light.

The NASA Wide Field Infrared Survey (WISE) mission you mentioned was an infrared telescope too, but it was in Earth’s orbit, and is no longer operational. WISE was intended for other observations, not just asteroids, but it did discover 130 Near Earth Asteroids.  To put that in perspective, “Sentinel” will discover that number in less than one day of observations.

RBTH: Russia led space exploration during the 1950s and 1960s and still offers advanced space technologies (you certainly know this first hand having been ISS and Soyuz astronaut). Russia is going to launch its own large telescope called “Spektr-RG” in 2014. Do you see any role for the Russian space industry to play when it comes to safeguarding our planet form asteroids and collaborating with B612?

E.L.: In 2003 I had the privilege to fly a Russian Soyuz (TMA-2) to the International Space Station (ISS).  During my years of training for ISS I came to really appreciate the achievements of the Russian space program. The “Spektr-RG” telescope will be placed in Earth’s orbit, and is not an infrared telescope.

It is dedicated to other observations, and will not be useful for asteroid discovery.  I am not familiar with any concrete plans by Russia with regards to protecting our planet from asteroids.

However the B612 Foundation has a strong Russian connection in that we do have Russian donors.  Because the problem of asteroid-impacts is inherently global, our mission is supported by donors from around the world.

RBTH: Some Russian government officials put forward the idea of combining international recourses in order to develop some sort of joint anti-asteroid missile defense system. Is that doable or just a fantasy?

E.L.: We already know how to deflect asteroids.  In the vast majority of cases, all that is needed [scientists believe] is to simply run into the asteroid with a small spacecraft, and then if necessary to tow the asteroid using a [to be constructed] Gravity Tractor spacecraft.  But any asteroid deflection would require decades of advance notice in order to be successful.

Sentinel will provide decades of notice, and is therefore far and away the most important thing that can be done now to protect the planet from an asteroid impact. If there is an impending asteroid impact, the governments of the world, including Russia, will have time to plan and execute a deflection mission.