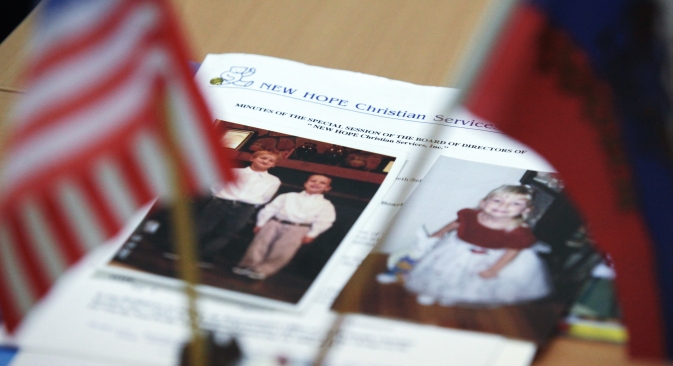 Russia and the U.S. are going to collaborate to investigate the death of adopted Russian child in Texas. Source: RIA Novosti / Igor Rustak

The Russian Investigative Committee opened a criminal inquiry into the death of Russian boy, allegedly killed by his adoptive American mother in Texas. Meanwhile, some Russian officials hope that U.S. attorneys will cooperate in investigating the death of the adopted Russian boy.

Russian officials hope that U.S. attorneys will contribute to the investigation launched by the Russian Investigative Committee into the death of a Russian boy allegedly killed by his adoptive American mother in Texas.

Russian Investigative Committee spokesman Vladimir Markin has announced the start of a criminal inquiry into the death of 3-year-old Russian boy Maxim Kuzmin, who was allegedly killed by his adoptive mother at the end of January.

"The criminal case was opened based on murder charges - Article 105 of the Russian Penal Code," he said.

The Investigative Committee will take "all of the measures needed to prosecute all those involved in this savage crime in accordance with the law," Markin said.

"The Investigative Committee will also petition to have Kuzmin's adoptive mother arrested in absentia, as well as will seek permission for Russian investigators to join this murder inquiry in the U.S.," Markin said.

Maxim was allegedly beaten to death by his American mother in Texas. He was adopted from the same orphanage, where Dima Yakovlev, who died after his adoptive American father left him in a locked car in a parking lot for nine hours on a hot day in 2008, had lived. A Russian bill retaliating against the U.S. Magnitsky Act and banning adoptions of Russian children by American families  was named after Dima Yakovlev.

Meanwhile, Pskov Region Governor Andrei Turchak has ordered local  social services to broadly contribute to the investigation into the death of Kuzmin. He has ordered a halt to all child adoption procedures in the region, according to the press service of the regional administration.

"A savage crime has been committed in America once again," Turchak said. "Its victim was a child adopted from our region - Maxim Kuzmin. He died before the ambulance arrived. It was painful for us to hear this news. We have put all previously launched procedures for adopting children by any families on hold."

"Such cooperation is possible," Lebedev told journalists in Moscow on Tuesday. "We have offered it to the chairman of the U.S. Supreme Court. I have invited him to visit Russia and sign an agreement on cooperation or a letter of intent. The embassy has replied to us that our proposal is being discussed."

"The attorney's office in Texas has said it will cooperate with Russia in investigating Maxim Kuzmin's death in an adoptive American family," Astakhov said on Twitter after talks with a representative of the Russian consular service in Texas. Maxim's brother Kirill, age two, remains with the family, Astakhov added.

"This will help save their [children's] lives," he said. "More of our children are dying, but we, meanwhile, cannot even get immediate information about what was happening to them, all of which arouses concern as before. If the American parents are found guilty, I do not rule out we will have to discuss with U.S. officials whether the second Russian child adopted by the couple should remain with them."

Astakhov is also concerned whether the second adopted child of the American family where Kuzmin lived, should be handed over to another American family.

"If the mother is found guilty, she must not be allowed to take care of the child," he said. "If the father's involvement is also proven and if he is deprived of parental rights, the boy will have to be handed over to another family, as law requires in the United States."

Russia has the right to demand the boy's return to his homeland, but he will most probably be handed over to another family in accordance with American law, Astakhov added.

"We are coordinating our work with the Education Ministry's social services," he said. "A procedure for returning the boy [to Russia] will be launched today. The Pskov Region administration, for its part, is prepared to take all of the measures needed to help the child get a new family on the territory of our region."