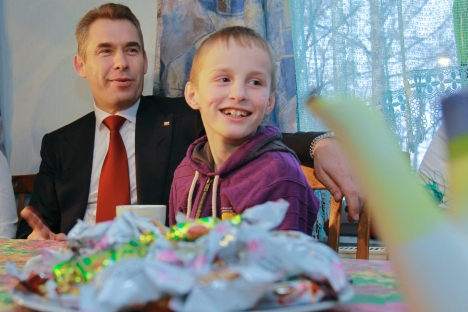 Russian children's rights ombudsman speaks candidly about his mission to abolish foreign adoption and end Russia’s role as an international “donor of orphans.”

Russian children's rights ombudsman Pavel Astakhov, 47, is a man with a controversial mission: to end once and for all the American adoption of Russian children. In an interview with Anna Nemtsova, he said he wants to end foreign adoption entirely. Three years ago, when he was appointed ombudsman for children’s rights, he declared that foreign adoption was “shameful” for Russia. In early February, Astakhov was appointed adviser to the president. 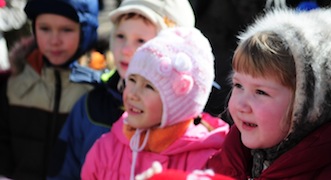 Astakhov has had a diverse and storied legal career. In his past work as a defense lawyer, Astakhov frequently criticized the Russian court system. Later he gained more notoriety for being the star judge on a televised legal education show “The Hour of Judgment.”

His international family lives in Moscow and in France; he is married with three sons. His youngest was born in France and his oldest son studied in the United States and United Kingdom. When asked if he would consider adoption, Astakhov said, “That is very difficult; I have no time to see my own children.”

At the time the Russian government decided to ban U.S. adoption at the end of 2012, about 1,000 American families were in the midst of adoption proceedings. The new law was named after Dima Yakovlev, a toddler who died of heat stroke in Virginia, after his adoptive father left him in a parked car for many hours.

More than 60,000 American couples have adopted Russian orphans; 19 of the adopted children have died, some at the hands of their adoptive parents in the United States.

RBTH: One of the main arguments lawmakers made for banning adoption was that it had become impossible to monitor or control Russian orphans once they were in the United States. The owner of a ranch in Montana, Joyce Sterkel, told Kommersant newspaper that if you had asked her properly, she would have received you. Are you aware that she was upset that you referred to her ranch as “a prison for kids”?

P.A.: To be honest with you, I did not read the interview but I can imagine things she said to defend her reputation. A Russian consul visited her ranch in 2010 and saw 30 children including 10 Russian orphans living there. As far as I know, parents paid the ranch owner about $4,000 for every child.

She runs a profitable business - she also receives state subsidies for each child that brings her up to $120,000 a month. We have copies of papers going back eight years for children coming to stay at her ranch from adoptive families, who did not want to bring them up. Some of the children moved back with their adoptive families, some went to juvenile prisons, a few ended up in psychiatric clinics.

RBTH: You described the most dramatic cases of failed American adoptions to Russian deputies in Parliament. Americans adopted more than 60,000 children in the past 20 years and many of them had a chance to live a much better life. Are you aware that some Russian orphanages look more like gulag prisons than homes for children?

P.A.: I have personally visited 1,022 Russian orphanages, baby homes and boarding schools – they are all very different in different Russian regions. Conditions at the orphanages in Nizhny Novgorod and Vladimir regions are worse than in Kaluga region, for example. It very much depends on the position of the region’s governor, and his conscience.

In Kaluga, governor Victor Baburin is doing everything to find families for every orphan; he has already closed down most of the orphanages.

RBTH: Several hundred Russian orphans who had a chance to go to the United States and live in families stayed in Russia due to the adoption ban. What alternative do you have for them in Russia?

P.A.: The only acceptable alternative is to find a family for each child, either adoptive or a real one. My goal, the idea I am promoting, is called Russia Without Orphans. Last year we managed to find families for hundreds of orphans and closed around 100 orphanages.

Many of these places have disgusting environment for children. Children live like inmates in jails, while 99 percent of them have relatives, aunts, uncles or grandparents who cannot afford taking them home because of low incomes. Our surveys show that 75 percent of parents abandon their children because of they live in tiny apartments without any income, and 84 percent of abandoned children have living parents who have been deprived of their parental rights.

The time has come to turn the system from its head back on to its feet, find jobs for such parents and provide medical treatment for them, if they are sick.

RBTH: Are there any state programs offering significant financial support to adoptive families in Russia?

P.A.: The ministry of education and science, which oversees adoptions in Russia, has increased financial support to families adopting children with disabilities from 13,000 to 100,000 rubles ($3,300); that will be a one-time help, but the difference is significant.

RBTH: The adoption ban was an act broadly criticized by the international community. Do you feel concerned that your name is going to be remembered as an inspiration for the law?

P.A.: Who would be the judges? I wish American adoption was banned back in 2010, when an American mother put her adoptive son, the Russian Artem Savelyev, on the plane and sent him back to Russia. I get rivers of critical mail. But there is a Russian saying: “tanks are not afraid of dirt.” My job here is to struggle in the regions against those who ignore the issues we have with orphanages, against corruption, people who benefit from stealing from orphanages.

RBTH: Would you suggest that Russia should ban adoption to Europe as well?

P.A.: Nobody takes orphans away from France or Norway or Switzerland. Not a single European country gives children away to America. Europeans did not want to welcome Romania to the European Union because of its foreign adoption practices.

Why should Russia be a donor of orphans? We are a great country, self-respected and self-sufficient. In the midst of the crisis of the 1990s, we allowed foreign adoption. But it is time to put an end to it. I am personally against foreign adoption. The Dima Yakovlev law would not have been signed if I did not report to the government that we have fewer and fewer orphanages in the country.

RBTH: What is the situation with Russian orphans now? How many are there? Different sources have different numbers. Is it true that Russian families feel reluctant about adopting seriously sick children and now, due to the new law, many disabled kids are stranded in orphanages?

P.A.: We have around 653,000 orphans in Russia; 522,000 live in families, about 20 thousand 16-17 year old orphans live in special dorms and 105,000 in orphanages. Journalists often use the wrong statistics. Or they find some example to criticize us with, using a disabled child and waving with it, as with a flag.

I can give you 10 cases of Russian families adopting kids with Down syndrome. We are attacked for not giving away our disabled children. But isn’t it a real shame to give away sick children! We can solve our problems at home, with help of state programs. We also find state funding to transfer children abroad for treatment, if it cannot be provided in Russia.