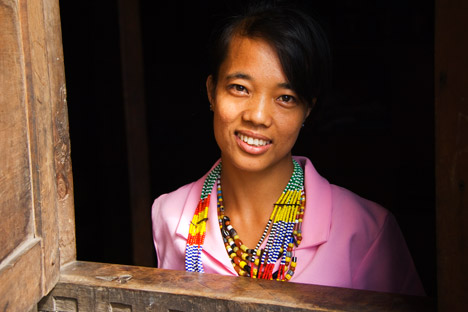 Au pairs can earn more in Russia than at home, and the conditions they live in are not as terrible as many had originally anticipated.

Foreign nannies and governesses are becoming more fashionable with Russia’s wealthy with each passing year. From time to time there is a surge in interest towards representatives of ethnic groups and nationalities that are somewhat exotic by European standards. English-speaking personnel are in the greatest demand. In Russia they can earn more than at home, and the conditions they live in are not as terrible as they had originally anticipated.

Alongside foreign personnel from the Philippines, governesses from Brazil are ever more popular.

“Somewhat fussy, but kind and diligent nannies from Brazil will let your kid bathe in an ocean of care and love,” says an ad published by one of the specialised agencies. “And their determination to keep things tidy is truly fanatical.”

A nanny from Brazil can hope to make 600-700 dollars a month. This is not much even by Moscow standards. Bringing a foreign nanny to Russia, with all the necessary formalities, will cost about 150,000 roubles (5,000 dollars).

The migration of foreign nannies into Russia began several years ago. For taking care of Russian kids in line with the best European traditions they want to be paid more than Russian nannies with higher medical or pedagogical education. At a certain point it might seem that this fashion would fade away soon, as with other trends. However, over the past few years the demand for foreign nannies has doubled. Besides, Asian colleagues have offered competition to the governesses from Europe.

Foreign nannies have taken away a considerable share of the market away from the Russian competitors. To take care of their kids, wealthy parents usually hire foreigners with no command of the Russian language at all. As one of the mothers has acknowledged, apart from the main goal – teaching the kid to chat fluently in a foreign language - there is another one. Servants unable to speak Russian will not tell outsiders certain things they should never tell, and all family secrets will remain inside the tall fences surrounding family estates.

After all, many foreign celebrities have already fallen victim to chatty nannies. Therefore, personnel who prefer to keep their mouths shut are in great demand.

Several years ago the first Filipina nanny appeared at a luxurious family home on the Rublyovskoye highway. She spoke no Russian and was surely unable to tell anything the neighbours’ housemaid. Then the folks next door decided to follow suit.

As a result, guests from the Philippines began to master the Russian market of household services working for Russia’s new rich. Sometimes they even asked less for their work than their Russian competitors.

Slowly but surely, they began to be allowed to take care of the kids. That’s how the first nannies from the remote Philippines appeared in Russian families.

An English-speaking nanny from Asia these days makes 1,000 dollars a month, and the one without the knowledge of the language, 700 dollars. However, Europeans are still in greater demand and they cost more. The monthly salary of a governess from Europe ranges 2,000 to 2,500 dollars. A Russian nanny agrees to work for a far less moderate remuneration – 500 dollars a month.

English-speaking nannies are in the greatest demand. French-speaking ones are sought less often. As for Germans, specialised agencies say they are in no demand at all. And many clients ask the agencies to never offer them nannies from the former Soviet republics.

How do foreign personnel feel in Russia? The weekly Moscow News has published comments by some foreign nannies.

Colin Rayan, from Australia, 59. In Moscow since 2007. Specialization: psychology, psychological development of infants, English language teaching to foreigners. Works with children aged one to five.

“I fancied emerging Russia as a land of spies and intrigues. Now, after many years of work in Moscow I have realised that few of my ideas have turned out to be true. Russia amazes me with its commercialisation and the enormous gap between the rich and the poor. I felt no fears then, though, and I feel none today. One little thing. I felt somewhat uneasy when the bombs exploded in the Moscow metro.”

Rosie Colson, from Britain, 26. Holder of child development and education diplomas. Looks after children who have turned 18 months.

“Sometimes I have the impression that Russia is even a more well-to-do country than Britain. But I am told that’s the effect of the environment I am in. The kid I am looking after at the moment is a little genius. She memorises everything at once and she is very agile. Possibly, I would say that the Russian children I have met are more active and inquisitive than kids in my home country. The Russian family is very hospitable and I feel their attention and care.”

Leo, from Britain, 33. Specialisation – English language teaching to foreigners, work with problem youth, people with dependencies. On the way to Moscow as a family teacher.

“In my country many think that Russia is an unsafe place to live. Personally, I do not share such fears. Russian parents look strict, they appreciate their traditions and rules and attach great importance to discipline and education in the life of their children.”

“Family teachers and nannies – both male and female – are in great demand in Britain,” says Valentin Grogol, chief of the Russian office of the company English Nanny. “Whereas just five years ago, all of our clients had homes along the Rublovskoye Highway, now we have clientele all over Russia.”