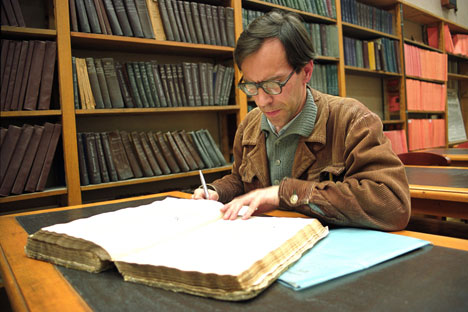 The Russian public is casting a critical eye and finding questionable dissertations written by prominent officials. A deep-rooted system of corruption is suspected, involving even the highest academic body that certifies all academic titles awarded in Russia.

In the past few months, the Russian public has begun calling into question the credibility of doctoral dissertations submitted by several political representatives and even one high-ranking minister. The scandal has already cost some politicians their careers, with both the assistant head of the Board of Education and the head of the Central Board of Examiners being forced to resign.

Vladimir Vladimirovich Burmatov was a young politician in the ruling parliamentary party, United Russia. Born in the Southern Urals, Burmatov’s name had been associated with a meteoric rise in politics. Until a few years ago, the 30-year-old teacher was best known to most Russians as a fervent blogger who vehemently defended the Kremlin in heated Internet discussions.

In 2011, Burmatov rose to the position of State Duma (the lower house of Russia’s parliament) representative and second in command of the Russian parliament’s Board of Education.

A few months later, however, Russian bloggers discovered suspicious similarities between his dissertation and other academic articles published previously by other researchers. A survey that Burmatov allegedly conducted among students of the University of Chelyabinsk proved to be even more condemning.

The results of the survey were identical, down to the very last detail, to those provided by students of a technical college in a survey conducted by another researcher in another city. Burmatov’s survey was nothing short of plagiarism. The extent of the scandal was so great that Burmatov lost his post on the Duma board and has become the brunt of jokes nationwide.

"Dr." Burmatov is not alone

The former Dr. Burmatov is not the lone Russian political figure who has attempted to bolster their legitimacy with an academic title, only to give rise to a myriad of critical questions regarding such titles. The current minister of culture, Vladimir Medinsky, for example, has been under fire from critics questioning the quality of his dissertation.

Medinsky — known, among other things, as the author of novels both historical and patriotic in nature — is said to have quoted other researchers without citing his sources in an abstract of his dissertation, “The Problem of Objectivity in Elucidating Russian History from the Second Half of the 15th through the 17th Centuries.”

Medinsky’s position was strong enough to withstand the scandal and remain in office, but the credibility of Russian elected officials adorning themselves with proud academic titles has taken a severe hit.

Despite the fact that academic titles are rarely used when addressing people in Russia, such titles are often an important prerequisite to performing certain jobs. Moreover, these titles substantiate an increase in allowable earnings.

Corruption in the Higher Attestation Commission

Suspicions have multiplied in the past weeks, suggesting that these instances of plagiarism or dissertations with questionable scientific content are not just isolated cases. It is becoming increasingly plausible that there is a deep-rooted system of corruption set up to produce forged dissertations.

On February 7, 2013, the chairman of the Higher Attestation Commission (VAK), Felix Shamkhalov, was arrested in Moscow. According to investigators, Shamkhalov illegally obtained close to €9 million ($12 million). Indications are surfacing that the main reason for his arrest is indeed the scandal surrounding the widespread forgery of dissertations. The VAK is the highest academic body that certifies all academic titles awarded in Russia.

Several dozen Russians, including other politicians (such as the leader of the Ultranationalists, Vladlen Kralin), are alleged to have received unmerited certification as a result of rampant corruption in the VAK.

In each case, for example, necessary publications were missing or had forged names. It is yet unclear in the Shamkhalov case if the investigation will confirm these suspicions. However, the credibility of academic titles — especially those held by politicians — has been dealt a major blow in Russia.