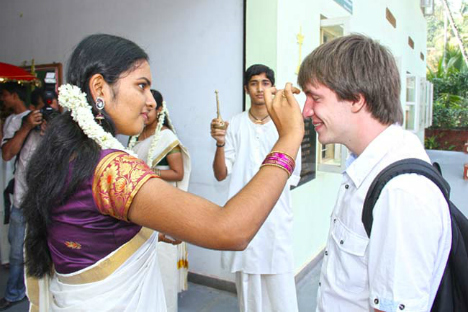 Indo-Russian Students’ Club in Trivandrum celebrates its second anniversary by bringing together children from Russia and India.

Ten school students from the Moscow, Samara, Irkutsk and other Russian cities, were in Kerala in early February to take part in celebrations marking the second anniversary of the Indo-Russian Students’ Club attached to the Russian Centre of Science and Culture (RCSC) in Trivandrum. The club was established in 2011 at the initiative of the RCSC in Trivandrum, supported by the School of Young Diplomats under the Moscow State University of International Relations.

The main function was held at the St. Mary’s Residential Central School, Poojapura, where the 12th Chapter of the Club was formed. The Russian students’ delegation was accorded a welcome at the school in a traditional way.

Addressing the gathering, Ratheesh Nair, Honorary Consul of the Russian Federation, and Director of the RCSC in Trivandrum, said that even though strategic partnership existed among many countries, the partnership and friendly ties between Russia and India remained unique and time-tested.  “We have more than 10 clubs and societies under the auspices of the RCSC, but the Students’ Club is very significant because we need a new generation in both Russia and India which will love and respect each other, because people-to-people contact is the foundation for Russian-Indian Relationship,” Nair said.

The Russian student delegation also made a courtesy call to Kerala Chief Minister Oommen Chandy at his office in the Kerala Secretariat. The students showed keen interest in the live-webcast introduced by the government aimed at transparency in governance, the immense wealth of Sri Padmanabha Swamy Temple, Communism and the current status of student politics in the state. The Russian children also visited some schools and tourist centres of historical importance before leaving the southern Indian state.

The USSR was immensely popular in Kerala, a state that was ruled for many stretches by communist governments. There is also an increasing in interest in post-Soviet Russia in the state.