Student survives fall from the sky 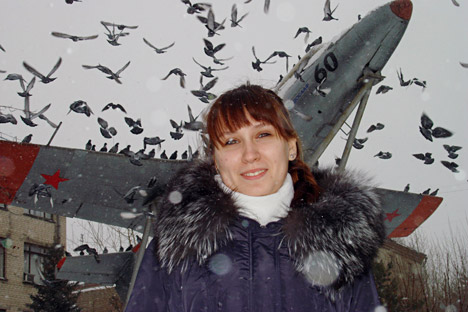 Yulia Yevdokimenko fell 800 meters (2,500 feet) to the ground when her parachute failed to open and, despite this accident, she survived and found the determination to return to a normal life. Source: Kommersant

What happened to Yulia Yevdokimenko after she fell 800 meters (2,500 feet) to the ground when her parachute failed to open can only be called a miracle. Not only did she survive, but she found the determination to return to a normal life.

It was two years ago that she made headlines: she fell twice the height of Moscow’s Ostankino TV tower and lived to tell the tale. Newspapers told her story, she was shown on all the major television channels and people recognized her on the street. These days, no one comes up to her in the street.

No one pays her any special attention – Yulia Yevdokimenko is just another student. At the shoe store, Yulia casts a longing look at some high-heel boots, but sighs: “No, I can't wear those kinds of heels anymore.” She broke her spine in the fall and has three artificial vertebrae. Doctors told her she can lift more than two kilograms (four pounds). “There were times when I carried a carton of milk for half an hour and it seemed like I was lifting a ton,” says Yulia.

Like many, Yulia had dreamed of flying since childhood.

“When I was a kid, I wanted to touch the sky and the clouds,” she says. “I wanted to soar high above the Earth, look down on everything, like a bird, and find out what flying would really feel like. You know, like a dandelion seed flies through the air. Later I grew up, of course, but I still dreamt about flying. When I heard that a bunch of my friends had already made parachute jumps – some of them several times – well, that was when I decided I had to do it...

“One reason I wanted to make the jump was to overcome my fear, because actually I’m afraid of heights. I think everyone needs to do this kind of stuff in their lives – to make a parachute jump, or touch a snake, to get rid of our phobias. So I thought: I just step out into the void and then it’s all about speed, wind, clouds and beauty! And my fears will disappear. I was one hundred percent convinced that it would be safe. I figured that making the jump would be no scarier than drinking a cup of coffee.”

Yulia remembers that the whole journey was mired with incidents: first, the car broke down; then, the road was closed because of an accident; and later a thunderstorm almost caused them to miss their crossing over the Irtysh River. Not being superstitious, she laughed off all these “warning signs.” Now she wishes she hadn’t.

“So we got there, and there were 11 of us. The instructor explained how we had to land, how to gather up the parachute. ‘If you see that your companion is drifting away,’ he explained, ‘you have to help him. Dump your own parachute and come down on his with him.’ We got half-an-hour's explanation, and that was all the training we got,” says Yulia.

By lunchtime they were all set, and the plane took off with everyone aboard.

“We were sitting gazing out of the plane windows. Once we reached 800 meters, they opened the door and we all began to jump out, one by one. I was third in line. The first couple of seconds were sheer bliss, I was flying. After I jumped, I started to count to 30 before pulling the cord – that’s what we were told to do. But nothing happened, and the upward jerk of the parachute opening, which we were told to expect, never happened.

"I looked up and the sky was completely empty. Can you imagine it? I began to lift my arms – like they’d told us – to find the suspension lines. It was then that I realized the main parachute hadn’t opened. It was about five or six seconds before I realized I had to pull the emergency parachute. It worked, but it careered off to the left and downwards, instead of going up."

To this day, neither the Uvat flying club staff nor the local prosecutors who investigated the case have been able to give a clear answer as to how this tragedy happened. Not even the video that one of Yulia's friends shot on a mobile phone from the ground helped. It just shows a human figure crashing down with tangled strips of parachute suspension lines above her.

“People say that before you die your whole life flashes before your eyes. And it happened to me, and then I realized that I’d gone insane and was ready to die. So I was hurtling towards the Earth, and the little trees below me were growing bigger and closer,” she recalls.

Yulia is certain that, in the seconds before she hit the ground, the wild panic in her mind gave way to an understanding and indifference to the inevitability of death – even a strange curiosity about what it would be like.

Walking across that same field she fell over years ago, Yulia explains how she might have hit the asphalt road, or a house, or the overhead electric cables, or a tree that day. Somehow, she had a miraculous escape. Between the fields, houses and trees was a small, knee-deep pond of water around six-by-nine feet across. In some inexplicable way, Yulia managed to fall directly into the only pond in the entire surrounding area.

“I didn’t lose consciousness for a second, but I somehow forgot where I was and why I was there,” says Yulia. Then I started to realize that I was somehow swimming – well, more floundering – and panicked that I was going to drown. I checked – my arms and legs were moving, so I tried to sit up. Probably it was the adrenalin that subdued the pain."

"I didn’t feel it at all. That was when people ran in from all directions shouting, ‘She’s alive! She’s moving!’ But I was just thinking, ‘OK, enough floundering around in the pond like a piglet, time I was getting up and going!’ An hour later, my whole body started to ache, and my back was in agony. As soon as the adrenalin stopped running, all of my body’s senses were sounding alarm bells after the fall.”

It was only the following day that they airlifted her to the regional hospital. The doctors were in complete amazement – no one usually survives a fall like that, but Yulia had no internal bleeding, and even her teeth were all in place.

“The surgeon looked me over carefully and then said: ‘I’m sorry, but did you really fall 800 meters, or was it just from a second- or third-floor balcony, maybe? Tell me, seriously?’” Yulia remembers.  “I said, ‘My back and side really hurt.’ The X-rays showed I’d broken three vertebrae and some ribs.”

The fact that she survived at all was ascribed by her doctors to her youth and to the fact of her being an athlete – but, most of all, they ascribed it to unbelievable luck. She underwent surgery on her spine, and they gave her prosthetic vertebrae. She did not even need to be kept in the hospital for long.

After everything that happened to her, people say Yulia is lucky, and some have even seriously suggested she may be some kind of talisman that brings luck with her.

“The first six months after my miraculous fall were particularly crazy,” says Yulia. “It got so serious that my friends who are involved in business even asked me to go around with them hand-in-hand. Like, ‘wow, tomorrow we’ve got a deal coming up; you’ll bring us luck!’”

Yulia admits that her outlook on life has changed as a result of what happened – she places more value on things she previously took for granted, and she has re-evaluated her priorities.

“I used to gripe that I didn’t have a laptop or a flashy mobile phone,” she says. “But now, when I look at people massively more disabled than I am, I realize that real happiness isn’t to be found in any of that. It’s not in fancy clothes or electronic gadgets, it’s in the fact that you can walk around, go out with friends, smile and delight in life. I wouldn’t say that I’m a better person now. I probably tell fibs just as before – but life’s like that.”

“I used to want to be a better person before, and then, well, this all happened. I got kind of motivated recently, and I organized a collection of toys for a children’s home for the New Year holidays. It was a kind of unexpected realization that you have to find time to do worthwhile things – and not forget to give thanks to God that he didn’t let me die back then, and that I have a wonderful family and wonderful friends, who helped me when things were grim,” says Yulia.

“It’s like Carnegie once said: ‘If you have lemons, make lemonade.’ Instead, I'll have something to frighten the kids with. I’ll tell them their mum didn’t behave well, skipped her lessons, didn’t wash the dishes – so someone threw her out of an aircraft. No, but seriously – you should never just give up, because things get better in the end. You just have to believe in yourself. And then you won’t be terrified, even if your parachute doesn’t open.”