Russian wrestler gets out of jail and returns to sambo 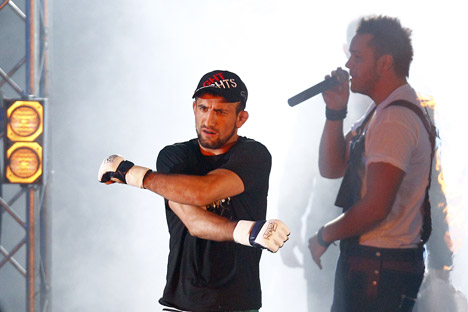 Rasul Mirzaev, who received a conditional sentence in connection with the murder of student Ivan Agafonov, fought in the Russian Championship just days after his release. The sambo wrestler won two fights before defeat in the third. Experts say only physical deterioration prevents top athletes from returning to sports after run-ins with the law.

The famous Russian sambo wrester, Rasul Mirzaev, who was banned from competitions for 18 months after being charged with the murder of student Ivan Agafonov, could return to his previous athletic form in just six months, as R-sport news agency was informed by the senior trainer of the Russian sambo wrestling team, Alexander Konakov.

Mirzaev is a world champion sambo wrestler, a Russian mixed martial arts (MMA) champion, winner of the Pankration World Championship, World Champion in the Fight Nights under-65-kilograms (under 143 pounds) category at the Battle of Moscow -4 tournament. He returned to training in the mid-January 2013.

In late February, Mirzaev competed in the Russian Championship held in Gubkin (Belgorodskaya Region). The athlete won his first two fights, but failed to reach the next round in the tournament when he lost his third.

“This was Mirzaev’s first competition after a very long break, and so it would have been over-optimistic to expect a guaranteed victory,” says Konakov.

“Moreover, this weight category gathered very serious and ambitious athletes," Konakov added. "Rasul has not quite regained his form yet, and it was a baptism by fire for him to have entered such a high-level competition. He needs some time to adapt to the new situation. But, bearing in mind Mirzaev’s fighting spirit and his tough character, I think he’ll get back his champion’s performance-level in half a year, if he puts in the hours.”

Konakov is confident that Mirzaev will regain his athletic form in a relatively short time.

“He is a talented, hard-working and intelligent athlete. At this point in time he was unable to enter the tournament in optimum form. But, at the moment, he is very motivated, and there is no doubt in my mind that Rasul will again show us what he is made of at future competitions. This is certainly not the last we will hear of his sporting successes,” says the trainer.

The team, which previously specialized in freestyle wrestling, expressed their willingness to return the world champion to the ring. In addition, Mirzaev’s lawyers are planning to release a biography of the troubled athlete.

As regards the murder case, the family of the slain 19-year-old Ivan Agafonov appealed for Mirzaev to be sentenced, but the appeal was rejected by the Moscow City Court judicial board on criminal cases. The verdict on the athlete was recognized as lawful and entered into force.

The whole story started with an incident on August 15, 2011, in the center of Moscow by the Garage night club. Mirzaev and Agafonov became involved in a fight, during which the athlete punched the student in the jaw. As he fell, Agafonov hit his head; he died in a hospital a few days later. Mirzaev approached the police himself and was arrested.

During the investigation, the article applied against the sportsman in the criminal case was changed. At first the prosecution pushed for him to be sentenced for grievous bodily harm, but then the prosecutor requested that the defendant be prosecuted on lighter charges — “causing death through negligence.” Five expert reports were carried out as part of the case.

On November 27, 2012, the court charged Mirzaev with causing death by negligence and sentenced him to two years in jail. However, since the athlete was detained in custody for more than a year, the sentence will be considered exempt.

This is certainly not the first time that an athlete has returned to professional sports after problems with the law.

In Russia, one of the most well-known cases of an athlete returning to professional sports involved Soviet soccer player Eduard Streltsov. At the tender age of 18, he was the best striker at the Soviet soccer championships; at 19, he was an Olympic Champion. When he was 21, Streltsov had the chance to be the star of the 1958 World Championship, but he was arrested on charges of rape and hooliganism.

According to some versions of events, Streltsov was investigated because he refused to transfer to the TsSK MO and Dynamo clubs, both of which were connected to the security structures. Either way, he ended up spending several years in jail. At 28, Streltsov returned to the soccer field and was recognized as the Soviet Union’s top player in 1967 and 1968.

The former head of the medical service at the Center for Sports Training at the Federal Agency for Physical Education, Sport and Tourism, Valentin Saninsky, told Vzglyad newspaper that, if an athlete is detained after being on the wrong side of the law, there is nothing to stop him from returning to sports after being released. In fact, the only potential obstacle is the deterioration of their physical condition.

In that case, the athlete could fail to qualify for big events and tournaments.

“So long as the athlete is able to regain their previous physical form, there are no obstacles to them returning to the sporting arena,” Saninsky, who is now the chief doctor of Moscow Region teams, told Vzglyad.