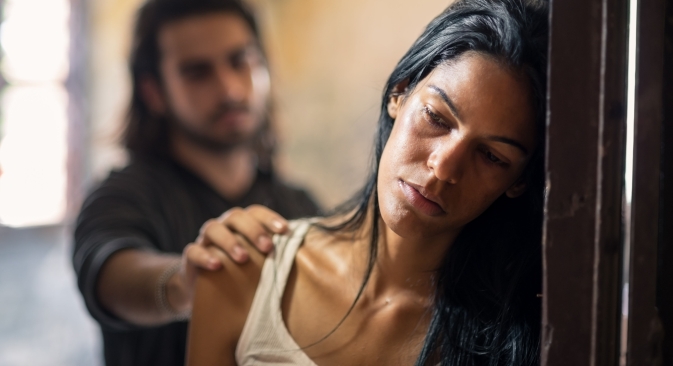 The problem of domestic violence is on the agenda in many countries, including in Russia. Source: Alamy / Legion Media

Russia lawmakers respond to the country’s shameful record of aggressive and violent behavior against women.

Statistically, a woman is killed every 40 minutes in Russia as a result of domestic violence. Often, victims do not seek help for abuse, due to ineffectual laws and social dogmas. As the domestic crime rate grows, lawmakers consider sending a draft on “Control and Prevention of Domestic Violence” to the State Duma this spring.

Unfortunately, cases of abuse against women occur so often that they rarely fall in the limelight.  Russia is no exception. The number of cases of domestic violence against women is very shocking. The majority of the cases where women are abused by their husbands or relatives are just swept under the rug and forgotten.

What could be the reason why the victims of domestic violence prefer not to file a case in the court?

Lack of faith in law enforcement

Irina Sokolova, vice chair of the State Duma Committee on Family, Women and Children, spoke of the inefficiency of the Russian administrative and penal legislation in regard to the problem of domestic violence. She is convinced of the necessity of a specific law that will not only provide the appropriate punishment for perpetrators of such crimes, but also guarantee real help and protection from the state to victims of domestic violence.

A draft on “Control and Prevention of Domestic Violence” may be sent for consideration to the Russian State Duma by the end of the spring session. The document conceives the maintenance of records for victims of domestic violence, as well as the development of a network of crisis centers where women can seek help.

Such laws are active in 89 countries; they were introduced in some nearby CIS countries and proved to be efficient. For example, in Moldova, the rate of domestic violence cases diminished by 30 percent after the introduction of the law, while, in Ukraine, this number decreased by 20 percent.

Drafts on the prevention of domestic violence were suggested in Russia before, but with no success. The first one was introduced in the State Duma as early as in 1995, but it was withdrawn in 1999. In 2007, one more attempt was made, to no avail.

Meanwhile, the official statistics show that the crime rate in families is growing. For instance, in 2011, in the Russian city of Kaliningrad, the rate of domestic crimes grew by 20 percent; in Chelyabinsk and Nizhny Novgorod it rose by 35.8 percent and 53 percent, respectively.

The opponents of the “Control and Prevention of Domestic Violence” draft say the Russian Penal Code has all the necessary prerequisites for punishing aggressors. They quote articles of the Code on intentional infliction of harm to health (Article 115), on beatings (Article 116), on threat of murder (Article 119) and on torture (Article 117).

Nonetheless, Salia Murzabaeva, a member of the State Duma Committee on protection of health, says, “usually the law works this way: until someone is killed or badly injured, it’s very difficult to punish a perpetrator under the existing law.”

Articles 115 and 116 stipulate initiation of criminal proceedings only at the request of the aggrieved party, and law enforcement authorities are not obliged to intervene. This means that the onus to both collect all the proof of the aggressor’s guilt and obtain the witness statements is on the victim. It is possible to hire a lawyer, but this is quite expensive and not everyone can afford it.

Also, the punishment for violating these articles is quite mild. An aggressor can be sentenced to 3–4 months imprisonment and then return home and continue physical intimidation. Articles 117 and 119 deal with graver crimes and can only be applied in the aftermath of an actual threat on someone’s life or grave physical injury, which is quite hard to prove.

In addition to the legal confusion around the issue, there is also the reluctance of police to handle domestic violence cases. Their attitude is based on prior experience; there are plenty of cases where victims revoke their complaints on the following day, due to emotional reasons.

Thus, the psychological aspect is probably an even bigger issue that the legal one. Why do the victims of domestic violence condone the behavior of their partners? Why do they keep silent about it?

The problem of domestic violence — in particular, the problem of men’s violence toward their partners or spouses — is on the agenda in many countries. In Russia, the situation is especially distressing. For example: in Spain, according to statistics, around 400 women in five years were killed from domestic violence; in Russia, the corresponding figure is around 12,000 women in just one year.

Some psychologists and sociologists say that the reason may be traced partially to the Russian mentality. This is the age-old way of accepting family as basically patriarchal; the wife is not supposed to speak up, even if she feels oppressed by her husband. Patience is seen as the main virtue of a woman, and standing up for her rights is condemned as a kind of rebellion that should be punished.

The foundation for such a family model is believed to have been laid in “Domostroi” (“The Household Book”) — the book published in the 16th century that can be considered the Bible of family relationships in Russia.

Although the times changed and women became much more independent from their spouses, many of them still stick to this conviction. The media, too, often feeds women the idea of their own guilt for any cruelty displayed toward them. Women are blamed for “provoking” men to harass them, and many of them grow to sincerely believe that they are to blame. Thus, they keep silent about the horrible things done to them and harbor the feelings of guilt and fear for years.

A famous Russian writer, psychoanalyst and women’s rights activist, Maria Arbatova, finds that one of the reasons for the high rate of domestic violence is society’s tolerance toward this phenomenon.

“There is a saying in Russia: ‘if he beats you, it means he loves you.’ And this idea is still alive in Russia’s collective subconscious,” Arbatova says. “So even if neighbors or friends know about a husband beating up his wife, they are unlikely to call the police, because it’s their personal business. If someone is beaten in the street, then people will interfere — but not when it happens in a family.”

Conservative members of society claim that, as it happens with many accepted norms, the concept of “Domostroi” was distorted.

Tatiana Chernikova, a lecturer and Russian history chair at MGIMO (Moscow’s State Institute of International Relations), says in an interview with the religious magazine “Foma” that the basics of “Domostroi” meant cherishing traditional values — with the husband being the head of family, guiding his wife and protecting her, and in no way promoting violence as a norm in family.

Undoubtedly, fanaticism and distortion of values play their role in the current situation with domestic violence in the country. Hopefully, along with preserving its cultural traditions, Russia’s society will become mature enough to embrace the necessity of changing some of its outdated dogmas.