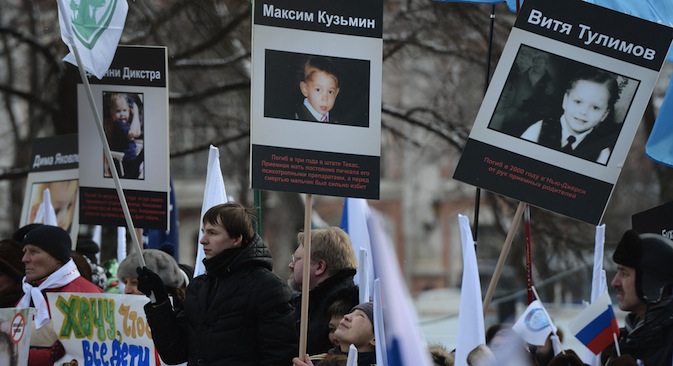 Participants of the the so-called 'March for Children's Defense" addressed the problem of Russia's orphanage. Source: RIA Novosti / Alexey Filippov

On Mar. 2, Russians took to the streets to defend children's rights, calling for the return of Kirill Kuzmin — the brother of a three-year-old Russian boy who recently died in the U.S.

Russians took to the streets in central Moscow to participate in the so-called March for Children's Defense on Saturday, March 2. They expressed their indignation about the recent scandal with Maxim Kuzmin (Max Shatto) — a three-year-old Russian boy who died in Texas —and called for the return of his brother, Kirill Kuzmin (Kristopher Shatto), from the U.S. to Russia.

While police claim that about 12,000 people participated in the rally, the organizers put the turnout at a maximum of 20,000.

Russian officials and human rights activists see the rally as a signal that the problem of Russian orphans and U.S. adoptions should be addressed as soon as possible.

Konstantin Kostin, head of Russia's Civil Society Development Foundation, described the march as "an indisputable success for its organizers."

"It was the most mass-scale street event of recent times, after the presidential election," he told Interfax.

Yet earlier it was reported that students of some universities and colleges were forced to join the rally in defense of Russian children and against foreign adoptions, according to Artyom Khromov, the leader of the Russian Student Union.

Opinion: Standing up for the adoption rights of Russian orphans

"The administration of the Moscow Artistic-Industrial Institute obliged its students to take part in the march in defense of children and maternity in Moscow on March 2," said Khromov.

Kostin, however, denied that the large turnout was the result of "administrative resources" being exploited.

Likewise, Irina Bergset, the coordinator of the Russian Mothers group, insisted that the march had nothing to do with politics.

"I have been one of the organizers of many mass actions, and I can say that it's an unrealistic task to bring together such numbers through administrative resources alone. I'm sure that the people came because it's a problem they're really worried about," said Kostin.

It was important, he added, that well-known politicians, public activists and arts figures were among the event participants.

"It's been said that Maxim caused mortal injuries to himself with a blunt object and injured his inner organs," Bergset said from the stage at the rally. "This is a slap in the face of our country and our people. Therefore, it is our goal now to return Maxim's brother, Kirill, to his home country. We demand returning Kirill to Russia."

"There are very complicated legal circumstances related to the possibility of such return," Peskov told Dozhd online television channel on Mar. 2. "Nevertheless, certain measures are being taken in America, including through our diplomats."

State Duma deputy and Olympic champion Alexander Karelin also participated in the rally. He called for the provision of comfortable conditions for orphaned children in Russia.

"We should provide orphaned children with such conditions that they could live and develop comfortably in our country, so that they could do sports in Russia and grow up well. Our children are Russia's future," Karelin said.

"We should talk about how to reduce bureaucratic hurdles and how to make the procedure of adopting Russian children easier for Russian families. We should provide any support to such families, including moral and material," Neverov told journalists during the rally.

At the same time, he views the idea of a complete ban on foreign adoptions in Russia as premature.

"I believe it is too early to talk about fully banning international adoptions, although I personally have a negative attitude toward this," the United Russia secretary said.

Several thousand adopted Russian orphans are currently living in the U.S., as Neverov noted: "While such a great number of our children are living in the U.S., we have no opportunity to follow their fates and see how they are raised and whether their lives there are good."