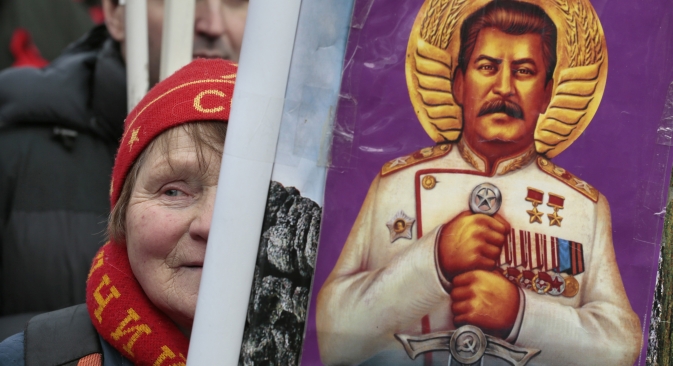 A women holds a portrait of the Soviet leader Josef Stalin, during a communists rally to mark Defenders of the Fatherland Day in Moscow, Russia, Saturday, Feb. 23, 2013. Source: AP

As the country prepares to mark the 60th anniversary of the Soviet leader’s death, the number of his supporters is falling, but not by much.

As Russia prepared to mark the 60th anniversary of Joseph Stalin’s death on March 5, 49 percent of Russians still see the Soviet dictator’s role in Russian history as positive, while 32 percent believe he played a negative role.

The numbers, from a new survey by the Levada Center, an independent polling agency, while showing that opinion is highly polarized on the issue, represent a slight loss of support for Stalin on 10 years ago, when 53 percent of Russians saw Stalin’s role at positive, and 33 percent negative.

Stalinism victim: 'There is no one to tell the young generation'

Among the supporters of Stalin, the leader of Russia’s Communist Party, Gennady Zyuganov, is one of the most vocal. He argues that many of the major achievements of the Soviet people under Stalin should be attributed to his effective guidance.

“Industrialization, victory in the Great Patriotic War [how Russians refer to the Soviet Union’s colossal struggle against Nazi Germany], the discovery of the atom, the development of nuclear technology, the [first] space flight and other undertakings, along with the glory of the great power, USSR, will remain in people’s memory forever,” Zyuganov wrote in Pravda, his party’s newspaper, in 2009. “They are inextricably linked to the name of Stalin, a revolutionary and a patriot of Russia.”

Arseny Roginsky, chairman of the Memorial human rights movement, says that we should keep in mind the price that Soviet people paid for the achievements of the Stalin era. “Attitudes toward Stalin will change only after people understand that their lives and dignity prevail over the state’s interests and that the state is for the people, not the other way around,” he said.

In a country where self-sacrifice for the state was propagated for decades, changing these attitudes is an uphill battle, he said.

Stalin's bunker in Samara, big secret under the ground

The Levada survey also found that number of people viewing Stalin’s role as “definitely positive” had dropped from 18 percent to 9 percent over the past 10 years.

Valeria Kasamara, an associate professor at the Department of Political Behavior at Moscow’s Higher School of Economics, says that Stalin’s high approval ratings can be explained by Russians’ yearning for “a tough, authoritarian ruler imposing order with an iron fist to fight corruption and crime.”

“Those should be the elderly generation, born during the Stalin era,” Kasamara says. “The number of Stalin’s die-hard supporters will decline, along with the natural decline in this group of the population.”

Kasamara says that the generally favorable attitude toward Stalin could also be a result of “the information vacuum” many people live in.

“These results indicate that almost half of Russians receive one-sided information about Stalin from the national media and have little idea about what mistakes he made and how many casualties these mistakes caused,” Kasamara says. “It could be an effect of a propaganda campaign that portrays Stalin as an effective manager.”

Ahead of the 60th anniversary of Stalin’s death, television channel NTV began broadcasting a documentary series titled: “Stalin is with us.”

Audio slideshow: Russia on the day of Stalin's funeral

“Four million arrested on political charges, some 800,000 executed by shooting, another several million collateral casualties, some 2 million peasants sent to the Gulag, several million Chechen, Ingush and Crimean Tatar people relocated from their homelands… This makes around 10 million people in a country with a population of 200 million. Is it a big number, or a small one?” the documentary’s author, Vladimir Chernyshyov, asks in his film.

“The argument about the ends and means is eternal and rhetorical. Is it more important to remember the hundreds of thousands of people who died during the construction of Russia’s new capital [St. Petersburg], or to be grateful to Peter the Great for founding this glorious city?” he adds.