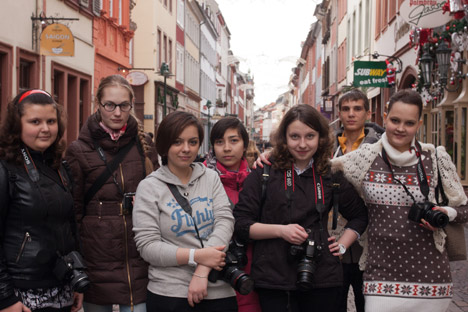 Participants of the charity photo-project “We live on this Earth” visit Heidelberg, Germany. Source: Amvrosiy Khramov

Photographer Yuri Khramov helps children with cancer: he teaches them photography in their hospital wards, arranges exhibitions of their work, and takes those who have recovered on trips to Germany.

Over a thousand children die of cancer every year in Russia. If not for charities and volunteers, the number would be even higher. Photographer Yuri Khramov also helps children who are ill: he teaches them photography in their hospital wards, arranges exhibitions of their work, and takes those who have recovered on trips to Germany.

Getting revenge on reality

Rita Khayrullina, 18, is the European triathlon champion and a participant in the photo-project “We live on this Earth,” which is led by photographer Yuri Khramov. A year ago, she was diagnosed with leukaemia, and during her recovery she took up a new hobby.

“I took photos of everything I could see: the doctors, the nurses, and the view from the window,” says Rita as she straightens out her short hair — the only reminder of her illness. “Photography helped to distract me from what was happening around me,” she says.

Rita was in the hospital for almost a year. Her friends were not allowed to visit, and she had to receive regular injections and chemotherapy treatment, which caused her hair to fall out. Rita also was not allowed to walk around.

“Psychologists say these situations can create a kind of visual hunger,” says Khramov. “Photography, like all forms of art, helps to develop the imagination. It can turn the oppressive walls of a dark hospital ward into a castle or a jungle.”

Yuri Khramov, 46, has been working on the project “We live on this Earth” for the last six years. He visits the children undergoing treatment at the Moscow Center of Pediatric Hematology, Oncology and Immunology, and he shows them how to photograph all the objects they are fed up with — i.e., a chair, the ceiling, their bed, the window. “Taking beautiful and interesting photos of these objects is our way of ‘getting back’ at reality,” the photographer says with a smile.

Life or a signature?

Yuri Khramov, 46, has been working on the charity project “We live on this Earth” for the last six years. Source: Maya Zhadina

In the past, Yuri worked as government official and then as a businessman; he only took photos for his own personal enjoyment. This was until he saw an advertisement: a charity was looking for a volunteer who would be able to explain the basics of photography to children once a month. Yuri applied and was successful.

He soon realized that monthly lessons simply were not enough: he could see the children’s need for interaction was growing, so he started coming once a week.

Once, just after a lesson, he learned that a child in the intensive care unit was dying. He only had 30 minutes left to live, according to the doctor. The boy could still be saved, but the hospital did not have enough of the necessary medicine. They contacted another hospital, which was able to share its medication.

“I raced there in the car, on the black ice, disregarding every sign on the road, in order to pick up the life-saving capsule of medicine,” the photographer says, recalling the wild adrenaline rush. Khramov made it and the child lived.

The next day when he went in to work, the photographer had to obtain a signature from an official. Khramov remained in the official’s office for what seemed like an eternity, until the documents were returned.

“As I held the signed papers in my hands, I had an epiphany: saving a child’s life took me 15 minutes, whereas obtaining a signature from a Russian official, which is worth nothing and which will not help anyone, took me eight hours,” says Khramov.

Since that day, the photo-project “We live on this Earth” has become his work. Many well-known Russian photographers help him with the project — not one of the photographers could refuse, when asked to hold a workshop for children in the hospital.

Once a year, Khramov takes a dozen or so children who have recovered from cancer on a trip to Germany. They stay in a small hotel, walk around the city, visit museums and castles, and, of course, take photos.

The children can participate on the trip for free. “How many parents can afford such a trip?” asks the photographer, almost rhetorically. The answer is only one or two, as most of the children come from underprivileged backgrounds.

Katya Kazakova, 26, a participant on the project who recovered from cancer seven years ago, believes that it does not matter when a person recovers: the psychological problems remain for a long time. Being underweight or overweight, a result of the hormone imbalance during treatment, can lead to bullying at school. Other teenagers continue to feel guilty about the impact their illness has had on their relatives.

What do Beslan children dream of?

“But the majority just need someone to talk to,” says Katya. “While they are in the hospital, they gradually lose contact with their friends. Aside from this, recovering from a serious illness changes your perspective on life.”

Only someone who has been through the same experience can understand this point of view. Walking around with a camera around their necks helps patients to forget everything else — including the intravenous drip and the medical ventilator.

There are exhibitions of the children’s photos, which are noticeably “un-childlike” in terms of depth and intensity. Yuri Khramov does not need to say much about the usefulness of these exhibitions, as it is quite obvious. He only tells a story he was told by the parents of one of the children, who, upon returning to school post-treatment, was teased by his peers for being “bald.”

“So what if I’m bald? I’ve had two exhibitions in Moscow, how many have you had?” was the boy’s response. As well as the exhibitions, Yuri also regularly publishes albums of the children’s photos and manages to sell almost every copy.

Yuri’s dream is to create a photo-camp at which young photographers from all over the world can work together. He has no doubt that this idea would be a huge success; he is a real optimist in general, often smiling and laughing. Thus, he may seem to be joking when he says he would finance the project out of his own pocket — but he really isn’t. In response to the question, “but what if you don’t have enough money left to take the kids to Heidelberg?” he simply replies: “Well, I’d take out a loan from the bank.”

See photos of participants and find more information about the project of the Facebook page (in Russian).