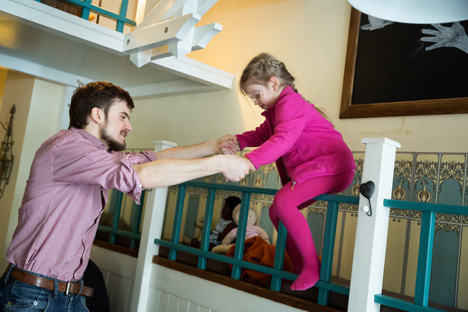 One year since Pussy Riot member Nadezhda Tolokonnikova's arrest, a Radio Liberty journalist traveled with the prisoner’s relatives to meet her in the prison camp in Mordovia.

It has been a year since Nadezhda Tolokonnikova, a member of the punk group Pussy Riot, was arrested. Radio Liberty journalist Masha Gessen traveled with the prisoner’s husband, father and daughter for a meeting in the prison camp in Mordovia, where Tolokonnikova is serving out her sentence.

If Pussy Riot not punished, thousands could have followed them - Russian Chief Rabbi

At nine o’clock in the morning, in the back yard of a housewares shop in Zubovaya Polyana, Pyotr Verzilov is loading some enormous suitcases into the trunk of my car. On the second floor of the shop is a hotel where we all – Verzilov, his four-year-old daughter Gera, his father-in-law Andrei Tolokonnikov, and myself – spent the night…

First I move the car away from the shop’s door, so that Verzilov has to walk a short way with the bags — and so that German television can film him doing it. “That’s the sixth time I’ve done this comedy routine with the luggage for the camera,” says Verzilov.

The German journalists try to interview Gera. She purses her lips and answers with nods: yes, I miss her; yes, I would like to visit mommy more often. When asked where we’re about to go, she finally answers in words: “We’re going to see Nadya.”

The last time Gera saw Nadezhda Tolokonnikova, who is serving a two-year sentence in Corrective Labor Camp 14 (about 25 miles from Zubovaya Polyana), was in Moscow in September, in the remand prison.

A loss of freedom is when you lose the right to choose your own company. Andrei Tolokonnikov, Nadezhda’s father, has already spent a whole day and night in the company of his son-in-law Verzilov; he has almost another 24 hours to spend with him, and he is finding it difficult.

Nadezhda Tolokonnikova, meanwhile, lives in a group of 40 women who are divided into two groups: those sentenced under Article 228 (drugs) and those serving time under Article 105 (murder).

The only person in the camp who comes from the same world as Tolokonnikova and who used to read the same books and magazines and walk the same streets as her is Yevgenia Khasis, who was sentenced to 18 years in prison for the murder of the lawyer Stanislav Markelov and the journalist Anastasia Baburova.

At this meeting, Tolokonnikova will mainly talk to Verzilov about the women she is imprisoned with in the camp.

The only time in all these hours that I will hear something in Verzilov’s voice approaching not so much a complaint as a slight touch of envy is when he says that the other imprisoned member of Pussy Riot, Maria Alekhina, who is being held in a prison camp in Perm Krai in “a safe place” — i.e. in solitary confinement — does not have to build relationships with other prisoners.

On the way to Corrective Labor Camp 14, Verzilov points out the local sights with a certain degree of pride. There is the Dubravny Labor Camp complex, home to the highest number of corrective labor establishments per square kilometer in the country.

We drive past a rusting signboard: “Restricted area. No entry without stopping.” But there’s no road block…

Next there comes a high-security men’s facility on both sides of the road and a bridge enclosed in steel plates on all sides, across which the prisoners are taken.

We pass another men’s labor camp, then a women’s camp, and a long, dreary section of road with the same flat forest on either side. Then, finally, we reach village of Partsa, where Corrective Labor Camp 14 is located.

Behind a tall, grey, paneled fence we can see the imposing features of a church — in the 1990s, churches were built in all camps — and a huge, high-quality, photographic poster featuring a portrait of a little girl, covering the whole wall of a large building.

Beneath it, Verzilov tells me, is the caption: “Your loved ones are waiting for you.” Here by the entrance stands the newly completed visitors’ building – it is suspected that it has been built because of Tolokonnikova and the journalists who come here.

In the main room, an LCD screen on the wall displays an official of the Federal Penitentiary Service in uniform reading the rules and excerpts from the Criminal Correction Code. The reading takes about 20 minutes, so that visitors can entirely absorb the rules by the end of the waiting period.

Sitting at a desk with his back to the screen, Verzilov compiles a list of everything in the package that he has brought to hand over. Fruit, medicines, bedding — only plain white pillows are allowed, and last time the pillowcase was not allowed, because they found a border on it…

Verzilov is still not very clear on what exactly constitutes a border on a pillowcase. On the other hand, only plain black underwear is allowed. The packaging from some Uniqlo thermal underwear is lying on the floor…

On the screen, the Federal Penitentiary Service official is monotonously reading through a list of forbidden items: “… Felt-tip pens, coloring pencils, carbon paper…” These are also potential escape tools.

Meanwhile, in the play room, Gera and her grandfather Andrei are building a model of a prison — fortified walls made from cubes, a small upturned bowl for one of the buildings, a tall pyramid for a church, and a large naked baby doll in the role of the head of the prison.

They drive a fire engine up to the wall and put up the ladder across to the pyramid; some little yellow ducks help the little figures of Nadya and her friends to escape from the prison. Gera later throws a huge red rubber ball at the structure, until the prison walls finally fall down.

The preliminary procedures take almost three hours total. Verzilov, Tolokonnikov and Gera go off to their meeting at nearly one o’clock in the afternoon, and they are sent out again at four. Allowing for the time spent waiting inside, they have had approximately two and a half hours out of the four they are allowed once every two months.

All this time, says Verzilov, they were sitting in the snack bar — the pride and joy not only of Corrective Labor Camp 14 but also of the entire Mordovian Federal Penitentiary Service administration. The snack bar has even been shown on television.

Gera spent the whole time sitting on her mother’s knee. Everyone involved at the meeting played “Find Koshchey,” but the adults were distracted and Gera cheated…

The result: about 11 hours in a car from Moscow to Mordovia, a short night in the housewares shop, a two-and-a-half-hour meeting, then 310 miles back to Moscow.

Gera, who has heroically withstood all the hardships and waiting of the last day and a half, is acting up, shouting and complaining,  and demanding to be taken to the hotel, to her grandmother and to her mother.

Andrei Tolokonnikov behaves likewise, scolding his granddaughter for being a “spoiled child.” Verzilov tries to tell me about the meeting, but is distracted all the while by one of his two phones. He then buries himself in Facebook, forgetting what he had said: “I don’t really want to talk, because there’s nothing special to say.”

After some time he will probably turn his impressions into a story — about the prisoner who, it is rumored, ate the man who was in love with her, and the one who waited for four years for her man to get out of prison and then two weeks later found him in bed with another woman and stabbed them both to death, and the one who is visited by the parents of her husband, whom she killed, because it served Fedka right…

But now everyone is tired, no one got what they wanted, and no one has the strength to pretend that everything is fine. As we are traveling, Verzilov gets an email from Alekhina: it seems as though she is somewhat offended that he talks about her life in the prison camp as if she is in a health resort.

The next day, Friday, news comes that Nadezhda Tolokonnikova is about to be put in a punishment cell because she allegedly was moving around the labor camp without an escort. This penalty, which she has received on the last working day of the first half of her prison sentence, will probably deprive her of any chance of early release on parole.

Monday, Mar.4, marked a year since Tolokonnikova and Alekhina were arrested. It was also Gera’s fifth birthday.

The article is abridged and first published in Russian in Bolshoi Gorod.