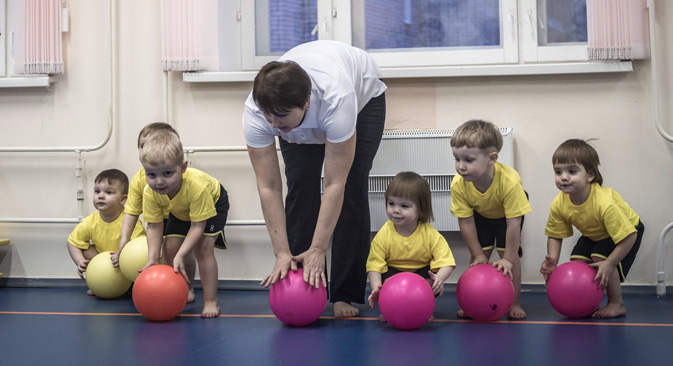 A very special orphanage just outside of Yaroslavl runs an assistance program for mothers, in order to help them gain the rights to their children back. The orphanage is also dedicated to finding homes for children whose only option is adoption or foster care. Unfortunately, because salaries are too low, the orphanage is losing employees.

On the outskirts of Yaroslavl, at the end of a long road lined with birch trees, in a dip in a residential neighborhood, stands Special Orphanage No. 1. The grey-brick, three-story building was once a playschool. It was subsequently turned into a home for abandoned children — from newborns to five-year-olds. A new wing was recently added in 2009, built according to the standards of institutions of its type.

Lyubov Rogovskaya, a small, dark-haired woman with a sweet face, has been running the orphanage for 30 years; she does not conceal her pride when she takes us on a tour of the place. The premises have been newly redecorated in the soft colors of childhood; the walls are covered with pictures of animals or landscapes.

The orphanage currently houses 96 young children. At first sight, they appear to have everything they could want. Pieces of games are crushed beneath heaps of toys. The sports hall, the pool for aquatic therapy and the sterilization area are all in excellent condition. There are plenty of activities to occupy and develop the little ones — sports, handicrafts, singing, etc.

Most of the residents here are “social orphans,” as they are in all the orphanages in Russia. That is to say, their parents are alive but, for various reasons, they are separated from their children. Most have had their parental rights restricted; in some cases, they have had them removed completely. Thus, the children placed in institutions have various statuses.

The children whose parents have not had their rights removed cannot be adopted; they can merely be placed with foster families. Only those who have been deliberately or forcibly abandoned (whose parents have thus forfeited all rights to their children) may be adopted.

“Twenty-eight children are here temporarily, waiting to return to their natural families; for the rest, we need to find foster families,” Rogovskaya says. There are no federal rules for assisting families having hard times. In Russia, Social Services does nothing to encourage mothers not to be separated from their children. In addition, families that see their children removed by Social Services because “their health or safety was in danger” do not receive any support for their rehabilitation.

VIDEO: Yasnaya Polyana, an orphanage at the Leo Tolstoy's estate

Orphanages have taken it upon themselves in recent years to fight against “children becoming orphans” and to stop them from being abandoned. “We have a program that helps mothers create the necessary conditions for taking their child back,” says Rogovskaya. The mothers promise to visit their children regularly, and, during these visits, psychologists, doctors and educators work with them.

“Our aim is to find homes for all the children in our care. That means either returning them to their own homes or sending them to new ones,” says head nurse Sofia Valerieva. In 2012, ninety-two children were admitted to Special Orphanage No. 1. Of these, 84 left, either to be placed with families or because they had reached the age when they had to be transferred to an orphanage for older children. Twenty-five children returned to their own families.

The institution employs 197 staff to look after the children; but this is not enough, admits Valerieva. “There are only 63 nurses; we need twice that amount,” she says. The orphanage has lost a lot of staff recently, because salaries are too low. As head nurse, Sofia earns 17,000 rubles a month, which is only $565. An ordinary nurse will not earn more than $300. “This is our main problem today,” says Rogovskaya. “We shall eventually lose medical staff and educators.”

Yet the general atmosphere does not reflect these concerns. There are 5-6 children in a group, looked after by two adults. Upon seeing us, the children look curiously but remain on their guard; they are rather shy and reserved. Some, however, are very proud to show off what they can do. For instance, there is little four-year-old, Artem, who stands squarely in the concert hall, singing at the top of his voice and repeating the same verse three times over — a song about a Christmas tree.

In the baby sections, nannies look after each infant individually — especially those that need special care. “Most of the babies here have health problems that are either innate or the result of maltreatment,” says Valerieva sadly. “Many have development problems; others arrived after having been abused, under-nourished and left on their own for a long time.”

Orphanage No. 1 may appear to be a comfortable and safe institution for these little orphans who want for nothing there. Except for the main thing, which Rogovskaya expresses: “Nothing, no material comfort, can replace the warmth of a real family.”