Power plant in space: Industry savior or threat to Earth? 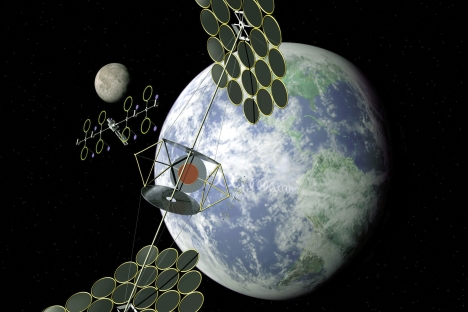 Some countries, including Russia, pin hopes on space-based solar power plants but experts remain hesitant about this initiative. Source: NASA

Russia is currently considering the possibility of building a giant solar-energy plant in space, from which electricity could be generated and directly transmitted to Earth. Several countries have plans to build power plants in space in the coming decades, but experts remain uncertain about the feasibility and necessity of such projects.

An initiative to create a space-based power plant has been put forward by the Central Research Institute of Machine Building (TSNIIMASH) — the key scientific enterprise of the Russian space agency Roscosmos. The concept itself is not new, as the idea was first introduced by American Peter Glaser in 1968.

Essentially, the plant should be able to transmit power to Earth from a giant solar panel located in space. To build up the requisite capacity, the panel needs to occupy an area of several square miles and be positioned at geostationary orbit, if possible. The electricity generated by the plant would be transformed into a powerful microwave flow, which would then be directed to a large antenna field on the Earth, where the microwaves would be converted back to electricity.

TSNIIMASH has suggested replacing microwaves with a laser, since radio beams are too dispersed and the receiving antenna would have to stretch across several square miles of land to capture them. A laser, however, would make it possible to reduce the footprint by several dozen times.

Unfortunately, there are currently no lasers of the requisite capacity. A series of infrared laser diodes scattered across the solar panel would also do the trick, though — their radiation could be aggregated and transmitted to the Earth.

The United States, Japan, Europe and China all have plans to build power plants in space by 2030–2040. Russian Space Academy (RSA) member Alexander Zheleznyakov believes it should not come as a surprise that Russia wants to join this list.

“We, too, need to work in this area. If we could find a way to make power generated in space inexpensive, it would benefit us all, as our planet has been lacking energy resources for a while. We need to think about the future. It’s not only a matter of maintaining a competitive edge against other countries. There is also an economic side to it. We are building new power plants on Earth, so why can’t we do the same in space if there is such a possibility?” Zheleznyakov says.

The Novosti Kosmonavtiki magazine deputy editor-in-chief, Igor Lisov, admits that it is an appealing idea, though he warns that it is extremely costly and, thus, unfeasible.

“We should keep our eyes wide open and be realistic about this. None of the countries have any serious work — or even tests — underway on transmitting energy from orbit to the Earth,” says Lisov.

The project exploits the myth that mankind is running out of energy, which is only true with regard to oil and natural gas. According to RSA member Andrei Ionin, there is little doubt that there will be no need for power plants in space, once other Earth-based energy sources — such as thermonuclear fusion — have been mastered.

“Launching a plant to orbit and operating it there is very expensive — to say nothing of the environmental impact for the Earth,” Ionin says.

“God forbid the laser beam moves out of position. What will happen to the Earth then?" Ionin asks. "We don’t know how such offsets may influence the ozone layer. What if the laser starts burning holes in it? The remedial actions would cost hundreds of times more than the power generated by the plant. The TSNIIMASH proposal needs to be reviewed by ecologists and economists.”

Grandiose projects such as this still have a very long way to go before they can be implemented. Still, experts agree that studies in this area may come in handy. Research in this field may help develop a number of interesting technological solutions, such as advanced types of lasers and solar modules.

First published in Russian in Voice of Russia.