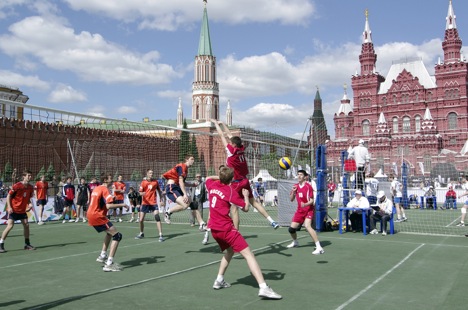 For a 25 year-old male to earn a GTO badge, for instance, he had to run the 100 metres in 13 seconds and swim 100 meters in one minute and thirty seconds. Source: PhotoXPress

Authorities are concerned about the health of the younger generation, with more and more children becoming hooked to computers and TV.

Physical education has been losing ground to its competitors – TV, computers and the so-called sedentary lifestyle in general – in the struggle for children’s and teenager’s leisure time, President Vladimir Putin stated during a meeting on the development of youth sport.

According to Putin, two-thirds of Russian children develop chronic diseases by the age of 14, and half of all pupils show musculoskeletal system development disorders.

To overcome this negative trend, we have to reconsider our approach to physical education; we need to build it into a comprehensive and effective modern system, the president believes.

One of the ways this can be done is to bring back the old Soviet regime’s physical training tests programme known as GTO (a Russian acronym meaning Ready for Labour and Defence). According to Putin, who is a Master of Sports in Sambo (a Russian martial art) and judo, this initiative “will set the required standard in physical culture.”

Russian schools welcomed the idea of reinstating mandatory physical training tests. As Pavel Karpov, head teacher at one of Moscow’s schools, told Gazeta.ru, “it is natural to expect the government to impose requirements on its future citizens,” and general physical fitness does not hurt anyone. “As far as I understand, the GTO programme involves certain standards, and I don’t see anything wrong about it.” He went on to say that, “physical education must involve certain criteria that lend themselves easily to record keeping, which means that there is a certain standard set. The GTO programme means that the bar can actually apply universally.”

“This is a message to society that sport means a healthy lifestyle and meeting global standards for success,” ex-sportsman and current Federation Council (the Russian parliament's upper chamber) member Viacheslav Fetisov told RIA Novosti. According to Fetisov, being involved in sport from an early age can help kids develop a strong aversion to both alcohol and drugs by the age of 12. “We need a healthy nation, this will pave the way to a healthy economy and success in achieving the objectives we have set,” he said.

Meanwhile, the system of physical evaluation tests for children must certainly take medical conditions into account. “We can’t overtax kids and cause heart attacks; we need to have a system of guidelines,” Putin said.

According to Moscow children’s rights ombudsman Yevgeny Bunimovich, the physical health and development of children is a very important issue that has been all but neglected in Russian schools. “Kids of the same age differ greatly, in their physical fitness as well, and many have congenital conditions,” Bunimovich told Gazeta.Ru. “So, if we’re talking about paying attention to the physical development of every child and determining the standards that they can meet as individuals, then I think it’s a good thing. I am afraid, however, that there will be, as usual, just one standard. And I will have to deal with that.”

What is GTO anyway?

The GTO mass physical training programme – which means “Ready for Labour and Defence” – was introduced in 1931 to “enhance the physical education and readiness for mobilisation of the Soviet people, primarily the younger generation...”

Those who passed the tests were honoured with special gold or silver GTO badges, depending on the performance.

For a 25 year-old male to earn a GTO badge, for instance, he had to run the 100 metres in 13 seconds and swim 100 meters in one minute and thirty seconds.

Based on materials of RIA Novosti and Gazeta.ru.