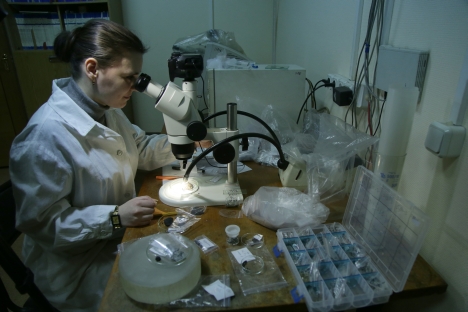 A research scientist of the Vernadsky Institute of Geochemistry and Analytical Chemistry examines fragments of the Chebarkul meteorite through a microscope. Source: RIA Novosti / Valeriy Melnikov

A month after the meteorite crash near the city of Chelyabinsk created a stir — both literally and figuratively — Russian scientists have calculated its weight and age and determined its main components and origin.

The initial weight of the celestial object that crashed to Earth in the vicinity of Chelyabinsk on February 15, 2013 was approximately 10,000 to 18,000 tons, with the meteor measuring 17-20 meters (55-65 feet). This is according to Erik Galimov, the director of the Vernadsky Institute of Geochemistry and Analytical Chemistry under the Russian Academy of Sciences. 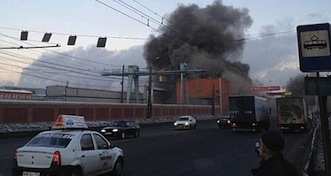 No more than 10 percent of the meteor’s initial weight actually hit the surface — some 1,000 tons, said Galimov. The rest of the meteor turned to dust and disintegrated in the atmosphere.

Scientists were able to collect approximately 3 kilograms (6.6 pounds) of the meteor material. “A certain amount wound up in the hands of outsiders,” Galimov said.

The power of the meteorite crash in Chelyabinsk was equivalent to no more than one kiloton of energy, although the blast itself released an estimated 500 kilotons of energy, said Mikhail Nazarov, head of the Laboratory of Meteoritics of the Vernadsky Institute.

“Some 90 percent of the initial weight of meteors burns up in the atmosphere. The same holds true for energy: the total impact may have come up to 500 kilotons, but what Chelyabinsk was actually exposed to was hardly even a kiloton of energy,” Nazarov said.

Scientists used an isotope analysis to determine the age of the meteor, but this method did not yield any precise estimate, since the meteor had been subject to the influence of various external factors that caused significant changes. Approximate estimates indicate the meteor was 4.5 billion years old.

The meteor used to be part of a large asteroid before it split apart and went off on its own. Around 10 million years ago it was hit by another celestial object, as indicated by melts caused by the meteor's extreme overheating. As a result, the body that actually reached the Earth was fairly loose and spongy, which caused it to disintegrate fairly easily when it entered our planet's atmosphere.

According to Galimov, “we are not dealing with any mystery here. It is a common chondrite — the same kind that makes up most meteorites.” Its main component is silicate, with metals accounting for no more than 10 percent, including zinc, iron, chrome, cobalt, aluminium, etc.

Meanwhile, according to an ITAR-TASS report that cites Elena Levina (director of the Intellectual Property Center of the Chelyabinsk Regional Chamber of Commerce and Industry), four trademark registration applications using the phrase “Chelyabinsk meteor” have already been submitted. “The proposed trademarks are mostly for confectionery goods,” said Levina.

The Chelyabinsk meteorite that hit the Earth on Feb. 15 produced the greatest impact event of the past hundred years. Early that morning, residents of a number of regions in the Urals witnessed the superbolide come crashing down, followed by a flare and a powerful explosion. The shockwave damaged houses and blew out numerous glass windows in Chelyabinsk, leaving over 1,000 people injured — mostly from broken glass.

The article is based on materials from RIA Novosti, Gazeta.ru, ITAR-TASS, Voice of Russiaand Rossiyskaya Gazeta.