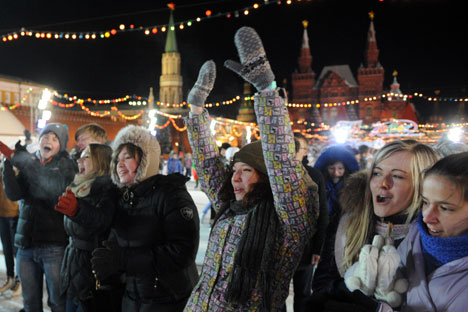 Young Russians are becoming increasingly interested in charity work and volunteering, according to sociologists. Source: ITAR-TASS

Sociologists paint a mixed picture of the current generation of young Russians.

Sociological studies have shown that the current generation of young Russians is critical of the authorities and skeptical of the opposition. In addition, young people are becoming increasingly interested in charity work and volunteering.

According to well-known Russian sociologist Olga Kryshtanovskaya, “today’s youth believes that Russia has a glorious past and a bright future, but its present is miserable.”

Young people see theft, poverty and abuse of power as modern Russia’s most troubling problems. They believe that bureaucrats are the main embodiment of social evil.

Researchers note, however, that the young nihilists have no idea of how the state machinery works and why it is needed. They believe the main duties of the state are to distribute subsidies, loans and pensions, as well as to organize recreational activities.

“Young people don’t think about ‘repairing’ the system. The best way to fix the situation is to destroy everything. But they don’t have any idea about what should replace it either,” Kryshtanovskaya said.

These are not the only observations that sociologists have made.

“There is a large segment of the youth that supports the government. But they do it for various reasons, with career considerations being the prevailing motive,” said Elena Omelchenko, head of the Center for Youth Studies at Moscow’s Higher School of Economics.

She believes there is no clear opposition group among the youth. Disenchantment with and alienation from politics are the prevailing sentiments.

“Young people’s brains are in a mess. Nationalist views coexist with liberal ideas, and homophobia is mixed with aspirations to freedom for all,” Omelchenko said.

According to Omelchenko, the negativity of the young is by no means threatening to boil over into a revolution. Most of those polled stated that they had not participated in the recent protests because they distrust the current opposition leaders.

“Forty percent of people polled believe the opposition is weak and will not succeed. They don’t see genuinely selfless people among its leaders — people who would be ready to sacrifice their lives for their ideals,” Kryshtanovskaya said.

At the same time, 90 percent of those polled said they did not see a political party they could call “their own” among the existing factions.

Still, the leaders of certain political parties enjoy a high level of trust among young people. The leader of the Liberal Democratic Party, Vladimir Zhirinovsky, ranked second among the most popular politicians. Billionaire Mikhail Prokhorov, a recent entrant in Russian politics, placed third.

President Vladimir Putin came out on top. Kryshtanovskaya explained: “Young people believe only he is really capable of challenging the corrupt bureaucratic system. The president’s high rating reflects hopes that he will try and break or change this system.”

Young people also admire those who follow their convictions, like actress Chulpan Khamatova who founded the Gift of Life charity foundation that helps children with cancer.

Young people are also becoming increasingly interested in charity work and volunteering. Having found no one to idolize among their own generation, they are becoming heroes themselves. Helping sick children and the elderly — those who are much worse off than they are — has become something that gives meaning to life.

The Center for Youth Studies at the Higher School of Economics has discovered another important trend. “We are seeing a pattern of behavior among the youth that can be called an extremely correct way of life. It envisages the rejection of drugs, alcohol and sexual promiscuity. Environmentalism and all kinds of physical exercise have become popular,” Omelchenko said.

Sociologists believe this is a way for the young to find a niche for their civic activity. Moreover, moral and ethical qualities are playing an increasingly important role in their search.