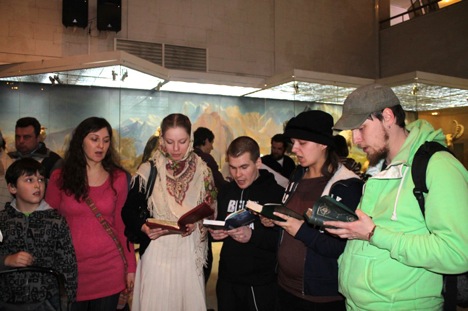 A group of Creationists staged a publicity stunt in Moscow’s Darwin Museum, unfurling a Christian banner, distributing leaflets, and singing hymns. This is the latest in a string of attention-seeking performances by self-proclaimed ‘Orthodox activists’.

At 3 pm on Saturday, a group of young people hoisted a banner over the building of the museum that read “God created the world”. A few minutes later, protesters released several hundred leaflets from the balcony in the main hall onto an unsuspecting audience of mostly children, as several sang traditional Orthodox hymns.

“Let’s protect our children from lies! The Universe was created by God 7522 years ago. The ‘Theory of Evolution’ is a pseudo-scientific myth, an inadequate and unproven theory that has been used to justify the murder of millions,” read one of the flyers.

Within minutes, the participants of what was advertised online beforehand as a “missionary flashmob” began to gather the dropped leaflets, and escaped to the nearest underground station where they burnt them.

Within hours, the organizers, who call themselves God’s Will, posted a video of the stunt, titled “Checkmate, atheists!”

Twelve cultural events of 2012 in Russia

Russian Orthodox Church spokesman Vsevolod Chaplin refused to condemn the stunt, saying simply that “it was a little more aggressive than it needed to be” in a TV interview on local Dozhd channel.

In contrast, renowned biologist Aleksandr Markov, who witnessed the event first-hand, was scathing.

“They are pathetic. I think they were aiming to produce a symmetrical response to Pussy Riot, but with one difference – they are not likely to face any serious punishment from the state,” Markov wrote in his blog.

Three members of punk performance group Pussy Riot were sentenced for up to two years in a penal colony on charges of creating public disorder for performing a “Punk Prayer” in Moscow’s main cathedral a year ago, in which they criticized the Orthodox Church and President Vladimir Putin.

The ideologue of the museum stunt, Dmitriy Enteo, became famous on the back of several stunts directed at Pussy Riot and their supporters, and has admitted that he consciously uses the same art performance aesthetic, but for opposite aims.

Over the past year, Enteo’s Orthodox Patrol or Inquisition, as he variously calls his band of active supporters, numbering several dozen, has accosted people on the streets wearing what they deemed to be inappropriate t-shirts, broke into an abortion clinic, interrupted a theater play sympathetic to Pussy Riot, and blockaded an art exhibition.

There have been more than a dozen performances in total, each one documented by journalists informed in advance through social media. Despite complaints from human rights groups, the police have never charged Enteo for causing a public disturbance, although he was beaten up when handing out leaflets last September.

On his prolific Twitter account he posts numerous messages against “sodomites”, says his crew will shut down any art exhibition that is not agreed with him in advance, and states his belief that the Sun rotates around the Earth.

24 year-old Dmitriy Enteo’s (real name Tsorionov) path to salvation has not been straightforward. The son of a university professor, he was previously a Hindu, a Buddhist, and a devotee of trance music. The pseudonym Enteo was derived from entheogen, a member of a group of psychodelic plants, such as peyote, used by shamans.

Apart from atheists, Enteo’s anger appears to be reserved for Russia’s opposition parties. On his Twitter account, he says the political program of the long-established social-democratic Yabloko Party is similar to that of Hitler.

In another filmed stunt last week, God’s Will burst into the offices of the Yabloko Party shouting that it was the party of “sodomites and Satanists”, grabbed their promotional literature, and burnt it.

In interviews, Enteo often speaks about his support for the government and about the need for “a union between Church and State” to protect Russia from “Western-sponsored threats”.

In just the last year, Moscow has introduced Cossack patrols, who claim to be guardians of Orthodox values. Meanwhile, “propaganda of homosexuality” has been banned in several regions, often after campaigns by deeply religious deputies.

In the wake of Pussy Riot’s performance, the Russian parliament has also devised a law that would make it a criminal misdemeanour to “offend the feelings of religious believers,” and a final draft is expected to be passed this spring.