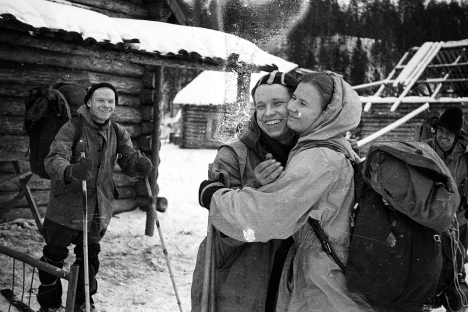 More than 5 decades after mysterious deaths of 9 ski-hikers at Dyatlov Pass, conspiracy theories only seem to be increasing.

Irradiated corpses, rotating fireballs in the sky, a cursed Mountain of the Dead, military experiments and a Soviet cover-up! It’s the mother of all mysteries – the strange deaths of nine ski-hikers in the Ural Mountains continue to spark fevered speculation in Russia, where films, documentaries and websites devoted to “Dyatlovmania” abound.

The mystery, which has undertones of the paranormal, has now come back in the recreation of the incident in Hollywood director Renny Harlin’s film “The Dyatlov Pass Incident.” But neither Harlin’s film nor a book just out detailing a possible connection to the American spy agency CIA have brought anyone closer to the truth. Soviet investigators cryptically described “an elemental force (the hikers) were in no state to overcome.”

According to the official Soviet investigation, in February 1959 nine students from the Ural Polytechnic Institute in Sverdlovsk (today’s Yekaterinburg) failed to return from a ski hike in the northern Urals. The first bodies of the group, led by Igor Dyatlov, a student at the radio technology faculty, were found on February 27 – four weeks after pitching their last camp at Kholat Syakhyl, which translates from the language of the indigenous Mansi people as “Mountain of the Dead”.

The hikers’ tent was discovered slashed from the inside with a knife, with most of their belongings still inside. Some bodies showed signs of hypothermia and blunt trauma, while others had broken ribs, a crushed skull and facial injuries. Some hikers were in their underwear, with burns on their hands and feet, and a strange, orange-crimson tan.

“Mountain of the Dead” turns into major tourist attraction

The first theory, that the deaths came after an avalanche, was widely disputed. Various people in the area at the time reported seeing flashing lights in the sky, while post-mortem examinations allegedly revealed small traces of beta radiation, fuelling rumours of military experiments. The mystery deepened after the Soviet leader Nikita Khrushchev declared the case classified, while the area was declared off limits.

In the years since, the conspiracy theories have multiplied. Oleg Kashin, a journalist who wrote the foreword for a new book about the incident, says the legend fills a deep national yearning for myth – and for a new perspective on Soviet history. Billed as one of the greatest unresolved mysteries of the last century, Yuri Yarovoi published in 1967 a fictionalized account inspired by the mysterious events, called “Of the Highest Rank of Complexity.”

“How long can you argue about Stalin?” Kashin says. “Dyatlov Pass is still relatively fresh.” In Harlin’s movie, a group of American students shoot a documentary about the incident and find history repeating itself. The Die Hard 2 director says: “I was fascinated by this story, which remains one of the great unsolved mysteries of modern paranormal lore. The facts, the script and the very dramatic setting convinced me that there is a thrilling movie there, just waiting to rivet audiences.” No release dates for the movie have yet been announced.

The dramatic deaths of 9 ski-hikers at Dyatlov Pass in 1959 continue to trigger conspiracy theories and tease students of the paranormal.