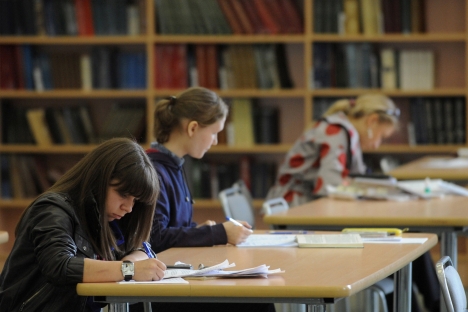 The library of of Moscow State Institute of International Relations (MGIMO). Source: PhotoXpress

A growing number of international students are studying in Russian universities that offer English-language instruction.

Russia has recently been developing more and more English-language programs at its universities, including the first-ever English-language bachelor’s degree at MGIMO in Moscow and various English-language master’s degrees at St. Petersburg State University. Experts say foreign students are also attracted to Russian institutions because of prestigious lecturers and lower tuition rates than in the West.

“I'm a 25-year-old student from Luxembourg,” says Dominic Chevolet, who is two years into a master’s degree in political science at the Moscow State Institute of International Relations (MGIMO). “To come to Russia with absolutely no knowledge of the Russian language was a challenge for me.”

Сhevolet is one of thousands of foreign students studying in Russia. Unlike many of those who study here, he does not speak Russian and has not had to spend a year trying to reach the required level of proficiency to start attending regular, Russian-language classes. He is studying for his master’s degree, but it is also possible to study for a bachelor's degree at MGIMO.

School of Government and International Affairs, which was incorporated into MGIMO in 2013, features the first undergraduate degree in Russia to be taught entirely in English. The program is focused primarily on foreign students.

“The English-speaking bachelor’s program is not simply a copy of the Russian language program at MGIMO,” says Yan Vaslavskiy, acting director of the MGIMO School of Government and International Affairs. “In addition to scientific disciplines, the program will cover a broad historical background, because we’re training professionals whose future work will in some way be linked with Russia. This is the reason foreign students are coming to study in our country.”

MGIMO is able to attract foreign students with its top-rate teaching staff. In addition to its own staff, the institute invites experts from major foreign and Russian companies to run master classes. Most importantly, MGIMO is known for its close ties with diplomatic circles and is able to attract Russian diplomats and ambassadors of foreign countries to lecture at the institute.

“The fact that the program is entirely in English is clearly a big plus,” says Chevolet. “It gives me the opportunity to take advantage of the resources accumulated at the university over the past few years. Now I can address the issues that interested me before, but this time look at them from the point of view of Russia.”

In 2010, Dmitry Medvedev merged the Russian Academy of Public Administration with the Academy of National Economy. The resulting educational institute (RANEPA) has the largest student body in Russia, with as many as 65 branches.

The first is an English-language international master’s degree, which includes four management training programs: global finance, project management, international business and change management. The second is a master’s degree at the Institute of Business Studies under the President of the Russian Federation (IBDA) — the only program available for training international executives in Russia to receive the prestigious European EPAS accreditation.

“European markets are not seeing much growth,” says Teimuraz Vashakmadze, a senior lecturer in the business and management strategy faculty and director of the master’s program at the RANEPA IBDA.

“Russia is therefore a far more interesting prospect for budding international managers. Plus, the IBDA master’s program is in the top three programs in Eastern Europe. The Institute is one of the International Business School Alliance’s (IBSA) partners, and foreign students are actually finding out about us through IBSA,” Vashakmadze added.

“I currently have 25 students in my course, and 15 of them are foreigners,” says Evgeny Shamis, a lecturer at RANEPA and general director of the company Sherpa S Pro. “Some students come to study independently, while others are being supported by their governments. For example, one of my students last year was from Turkey, where he works for the Ministry of Economic Affairs and is responsible for relations with Russia. For these students, it is important that RANEPA is affiliated with the civil service.”

There are currently 20 students in the IBDA’s English-language programs, and only seven on the English-language international master’s program. To increase the number of foreign students, the academy is expanding its network of university partners, attracting foreign teachers, and participating in international conferences.

Moscow is not the only city where foreign students can study without having to first master the Russian language. St. Petersburg State University has its own English-language master’s degree, with educational programs in business, management, economics, international relations and sociology; in 2013 there will also be programs in journalism, political science and ecology.

“Foreign students aiming to study Russian culture choose humanities programs — literature, history, philosophy, and so on. But, as you know, these programs are currently only taught in Russian,” says Egor Yablokov, head of St. Petersburg State University’s Administration Office. “Young foreign students have other reasons for choosing our English-language programs: on the whole, tuition fees for economics and management programs are considerably cheaper in Russian universities than in Europe and America.”