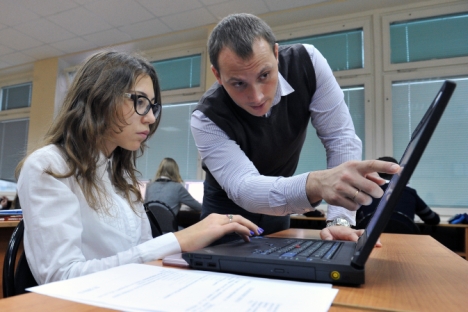 A growing numbers of Russians are quitting their jobs in search of adventures far away from the drudgery of normal life.

When a good-for-nothing, sloppy worker decides to quit, the boss cannot but heave a sigh of relief. But very often there is a different type of situation. The news an efficient, high-paid employee suddenly decides to leave sends the management into sincere dismay and even anger. The position looks quite nice and the salary, not bad at all, either. What else is to be wished? In the meantime, experts offer a plausible explanation very easily. An interesting job and the wish to see change at work these days for Russians are getting ever more important than the size of remuneration, although a market-type economy has long established itself.

According to a recent poll by the recruiting agency HeadHunter, which has reviewed the reasons why people decide to change the place of work, Russians tender resignation notices ever more often not because they are not paid well enough, or due to a labour dispute, but because they are bored with the daily chores at work and have wish to get away from it all. Although, the amount of money they get sill remains a major motivation, and a considerable rise in pay might persuade them to stay a little bit longer.

The recruiting agency polled a group of employees who decided to leave their previous jobs just recently. It has identified the following most frequent reasons why people make up their mind to quit – boring duties and dull work (25 percent) and fatigue and wish to see change (23 percent), while discontent with the salary takes third place (21 percent).

Offers of better conditions persuaded 16 percent of respondents to try themselves at something else. In the meantime, 14 percent are tired of the need to work extra hours now and then, 12 percent had expected career promotion in vain, and 11 percent developed fundamental disagreements with the management.

The poll indicated that a 20-30 percent wage rise might prove an incentive strong enough to make 20-30 percent of the employees who have resigned to change their mind. And one in two would have been stopped by the offer of a more attractive position.

The Rabta.ru employment portal earlier composed its own rating of the reasons why people decide to say good-bye to their previous job. Its findings confirm the trend. Specialists believe that there are roughly three groups of factors: the material incentives, the employee’s functions, and the psychological aspect. Group one includes the wage or salary, and the package of social benefits and bonuses. In group two one finds the need to work overtime. And lastly, there are such circumstances as relations co-workers and with the immediate superiors.

Experts say it is impossible to persuade a worthy employee to stay without offering opportunities to develop and display one’s creative potential. The employee begins to feel bored at once, if saddled with dull and senseless routine tasks.

Money has long ago stopped to play the role of number one incentive to excelling at work for many people, and the number of such people keeps growing, the rector of the Institute of Practical Psychology and Psychoanalysis, Yelena Spirkina, told Itar-Tass. And if people agree to put up with dull jobs just for the sake of money, they cannot but have a different sphere of life, where they can quench their thirst for thrill. In other words, a hobby. Otherwise, they are doomed to develop a conflict with their own self.

“In some opinion polls the amount of money may take very low places, say, 7th,” the psychoanalyst said. “These days far more people appreciate the chance to display one’s creative potential. Many of those who work just for money suddenly feel that a hobby, just spare time, is the most important thing in life.”

As an example Spirkina mentioned a system administrator employed at her institute. The person hates the job and makes money for the sole purpose of travelling to India to live at a spiritual hermitage for a while and to mediate there with the guru.

“Money and career are not everything that make a life worth living,” says Angelina Scham, an expert on business psychology, quoted by the portal Jobsmarket.ru. Many, in particular, those who have achieved something, bear in mind one more important factor: one’s job must be interesting.

One of the most complex situations that forces employees to hastily leave one’s work place is inability to find a common language with the bosses. In that case, Scham said, it is better to leave than try to come to terms.

Psychologist and journalist Vladimir Shakhidjanian is certain that it is very wrong to put too much pressure on subordinates.

“If the boss is always angry and keeps reprimanding the subordinate, even though the criticism may be fair, the employee begins to feel what engineers call ‘metal fatigue’,” he explained. “On the desk of each boss there must be a place for the watchword: DO NOT OVERDO IT, OR YOU MAY FIND YOURSELF ALL ALONE.”

It might seem, however, that there is a class of employees who cannot afford to take too many liberties. In particular, people just before or past the retirement age. But even with this group of people it is not so simple.

“Everything depends on how professional this or that person is,” says Yelena Spirkina. “For top class professionals age does not make a great difference. Professionalism and prestige are the only two merits that really count. These two are ever-lasting intangible assets, indeed, and they will never be out of fashion or in low demand.”