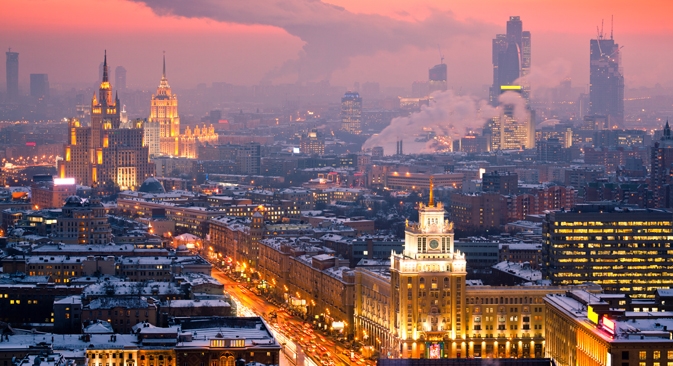 Moscow Chief Architect Sergei Kuznetsov: "Moscow must become a city in the full sense of the word. A city is a lifestyle." Source: Getty Images / Forobank

RBTH sat down with Moscow Chief Architect Sergei Kuznetsov to discuss problems of an urban environment, the New Moscow project, and the Russian national character.

Ahead of his departure for the MIPIM international real estate show, Moscow Chief Architect Sergei Kuznetsov talked to an RBTH correspondent about a comfortable urban environment, New Moscow, winter bike lanes, and the Russian national character.

Russia Beyond The Headlines: You will represent Moscow at the MIPIM show for real estate professionals. Tell us about what the city is going to show there.

Sergei Kuznetsov: We have two stands at the MIPIM. One showcases the ideology for the city’s development and the other is dedicated to investment projects that are at different stages of completion. Some of those projects make me proud, such as the renovation of the industrial area surrounding the ZIL auto plant — a huge area on the Moskva River.

The Meganom architectural bureau started developing the concept for this more than a year ago, and the General City Planning Institute has been actively working on it over the past few months.

I, too, have been involved in this work in my capacity as the city’s chief architect. The territory is up for an extremely thorough overhaul, a radical reduction in manufacturing capacity, development of a road network and a public transit system, and construction of homes, offices and cultural as well as sports facilities.

S.K.: Moscow must become a city in the full sense of the word. A city is a lifestyle. You live in a house that should be different from other houses: Your house should have a pleasant yard; your street should provide opportunities to go to a café, a restaurant, a corner store, or to socialize in any other way.

The functions that are inherent in a city and that differentiate it from a village — recreational, educational, medical, entertainment, cultural ones — should all be within reach.

Moscow is not such a city. Come to any “dormitory community” and you’ll see for yourself why it’s possible to sleep for eight hours there but not possible to organize the other 16 hours of your life.

If you can’t fulfill all vital functions in any part of a city, the entire city is sick.

RBTH: Are there any models or any experience Moscow might use?

S.K.: Every city is unique, but there’s experience we could draw upon. After the unification of Berlin, a new city center was built between its two former parts, almost from scratch, where the Wall used to be. Or take Hamburg, where a huge industrial area is being redeveloped into the HafenCity district — or Beijing, which has undergone a very serious gentrification.

The urban environment on the outskirts of Beijing has been created on the basis of the principle of mixed functions: each neighborhood has an office building, a hotel, a sports center and street-level stores. This infrastructure might even seem a little bit over the top. Another positive example is Shanghai, which developed its Pudong district — something similar to our Moscow City — by building on vacant land.

RBTH: Let’s talk about New Moscow. There has been a lot of talk about how New Moscow will be developed according to a modern plan, with a dense road network and individual houses — as rationally as possible, like suburbia. At the same time, if advertisements are anything to go by, huge apartment high-rises keep going up there.

S.K.: We are creating an alternative city center in New Moscow, not suburbia. That’s why the business district at Kommunarka, for instance, can’t be built up with individual houses complete with back gardens.

On the one hand, the problem of the new territories is that there is a huge backlog of projects developed by the Moscow region, to which they used to belong. People who approved those projects simply pushed these areas toward becoming a huge dormitory district. And now the Moscow city government has to bargain with the investors — trying, in some cases, to back out of other people’s promises. This is a difficult task, but we are working on it.

RBTH: What are you trying to achieve there?

S.K.: A comfortable urban environment. We are creating a lot of jobs; a large number of people should live there. And the only way to motivate them to move there is by creating a comfortable environment — not very densely built, not high-rise, featuring good architecture and a balance of functions.

RBTH: Is Moscow using the services of foreign architectural bureaus? Are they taking part in bids and can they win them?

S.K.: State-owned developers haven’t used the services of foreign architects until recently, when the agglomeration tender took place. Private investors work with foreign architects more often, but the fate of their projects is complicated. Foreign projects carried out in Moscow are few and far between. Perhaps two or three percent of them have ever got under way.

RBTH: And why is that?

S.K.: There’s no clear selection procedure. The quality of modern, Western architecture is far superior. Players understand that there’s a risk of market domination by Western architects, who would simply get most jobs. That’s why there’s this self-preservation, reflex action to protect the interests of domestic designers.

But I believe this is going to the extreme — to the point where absence of honest procedures has become the norm. In fact, a fairly small group of architects has monopolized the market for the last 15 years. They have divided it into spheres of influence and are perfectly happy with this. There’s no competition: They’ve learned how to fend off foreigners and how to keep young architects at bay, too.

That’s exactly the kind of situation I have started really fighting against.

S.K.: Creative competition is the most natural and fair manner of selection. We are now engaged in targeted negotiations, trying to get as many developers as possible on board. Bear in mind that I don’t expect any support from the architectural community; for them, competition is a natural threat. But this is extremely important for the city.

Now that we’re in the WTO, a lack of competitive domestic offerings could result in a wave of Western companies rushing in, because the current generation of Russian architects will inevitably be leaving the stage with no new talent to replace them.

There’s a risk of the market becoming flooded with third-rate architectural offices with serious resources and resilience, while strong creative architects might well stay away; dealing with developers and approvals is too difficult here. This is very dangerous. That’s why I believe we should foster competition and give our young people a chance.

RBTH: What are your thoughts on the bid in St. Petersburg, where many beautiful designs for the new building of the Mariinsky Theatre were submitted; one of them won, but a “mall” was eventually built under a totally different design?

S.K.: You have to understand that any tender is the responsibility of not only the architects but also the developers. I haven’t seen the Mariinsky building and I’m not prepared to judge it. In any case, implementing a good project in Russia is a thousand times more difficult than in Europe. Here, we have a malevolent professional community and a malevolent public, which will rub their hands and rejoice at every failure.

I, on the other hand, believe a long hard look should be taken at any errors, in order to avoid them in the future. But, in general, that’s what our people do: ridicule everything they can.

RBTH: Perhaps this is because we have no say in government? Even the mayor is appointed here…

S.K.: It’s silly to think that there are good-natured citizens versus an unpleasant government that has been appointed to run Moscow and is doing its job poorly. It’s not the architects that create cities and architecture; it’s the citizens, irrespective of the government model.

Look at the air conditioners hanging from the fronts of historic buildings: was it the mayor who put them there? Society loves to criticize everything indiscriminately. The worse the failure the better, because then there’s a reason for amusement.

This, unfortunately, is part of our culture, and our compatriots had better start changing. If everyone took a look at themselves first, then a look around and asked themselves: “How do I live? What kind of apartment do I live in? What’s the yard around my building like? What about my street? How do I park my car? How do I do my job?” the answers would be far from pleasant.

These are all components of the general socio-economic process in which some people haven’t tried hard enough and some people have done a poor job; so all changes should start with the people themselves.

RBTH: Bike lanes are one of the hot topics. After the municipal government started building them, young urbanites have rushed to their support, proclaiming them something of a cure-all for the city’s ills. But they can only be used five months a year at best.

S.K.: There are cities with bike lanes in Canada and northern United States where the climate is very similar to ours. But people still ride their bikes. That climate is an obstacle to biking is an illusion.

What we need is an articulate motivation and sensible organization of the process. As soon as people realize it would take them 15 minutes to get to work on a bike, riding down a clear, dedicated lane, instead of 30 minutes by car, followed by the search for a parking space, and that they could leave their bike safely near their place of work, there’s a strong chance they will ride bikes, even in winter.