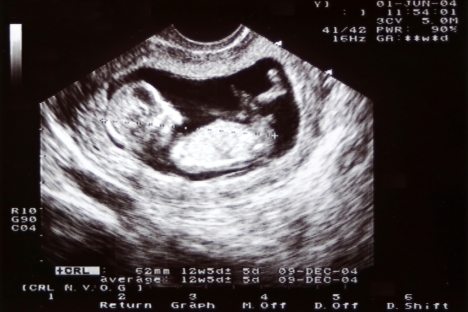 there are 50 abortions in Russia per 1,000 women of childbearing age, compared to 20 in the U.S., 18 in Great Britain and less than 10 in Germany. Source: PhotoXPress

A recent U.N. study shows that induced termination of pregnancy is still prominent in Russia as one of the most widespread methods of contraception.

As the abortion capital of the world, Russia has some of the most liberal abortion laws ever likely to be found. The number of abortions performed in Russia every year is many times higher than even its CIS neighbors, not to mention developed countries. Another reason for the “popularity” of abortions is the lack of awareness about contemporary methods of contraception. Only 14 percent of Russian women confirmed they were using birth control pills.

Although the number of abortions has shrunk by almost three times – from 4.1 million to 1.2 million a year – since the turbulent 1990s, the figures are still very high. For instance, there are 50 abortions in Russia per 1,000 women of childbearing age, compared to 20 in the U.S., 18 in Great Britain and less than 10 in Germany.

Aleksei Ulyanov, aide to the president of the Delovaya Rossiya (Business Russia) Public Organization, sees the overly lenient laws as the main reason behind the statistics.

Indeed, having an abortion in Russia is pretty much a walk in the park. An ex-patriot living in Germany wrote in a forum: “A friend of mine in Russia has abortions almost every year. It is a routine procedure there: you come, pay, and have it done.”

In Russia you can terminate a pregnancy after up to 12 weeks, free of charge. After 12 weeks, you need to have medical or social grounds for the abortion. It is not difficult to get around these regulations, though: all you have to do is go to one of the many private clinics where the doctors will, for the right price, “accommodate your whims.” Moreover, the law does not impose any responsibility on the doctor for performing the procedure.

This is why Ulyanov advocates a number of measures that are likely to cut the number of abortions three- or fourfold. One of these measures is scheduling the surgery a week after the initial referral, rather than performing it on the same day. He also backs the move to introduce mandatory interviews with a psychologist or a social worker, and placing responsibility for illegal or coerced abortions on medical workers.

Another sure way to improve the statistics is to raise public awareness of methods of contraception – yet another area where Russia lags behind European countries.

According to a joint study carried out by the Lomonosov Moscow State University Faculty of Economics and the Institute of Demography, roughly 10 percent of couples do not use any methods of contraception at all. To compare, that figure is four percent for Hungary, three percent for France and two percent for Belgium.

Meanwhile, almost 80 percent of women said they were taking precautions against unintended pregnancies. When asked for details, the poll revealed that only 20 percent of women were using intrauterine devices, and 14 percent were taking birth control pills – both reliable methods of contraception – while the rest opted for such outdated approaches as the calendar-based method and withdrawal.

The numbers hardly vary across the country. While it would be natural to expect a higher awareness of contemporary contraception methods from women living in Moscow and St. Petersburg, most of them (44 percent) still use condoms as the main method, with birth control pills coming in second with 16 percent.

It may be that people in Russia continue to distrust medication in general. On many women’s forums it is still conventional wisdom that hormonal contraceptives have a negative impact on one’s health. Unfortunately, concerns about the health effects of abortions on women are voiced far less frequently.