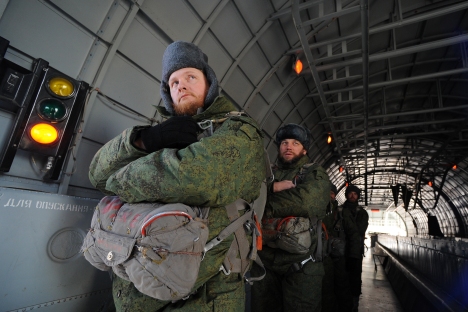 Paratrooper priests have landed the world’s first-ever mobile church. Officials at the Ministry of Defense explained that the number of recruits that call themselves Orthodox Christians is growing each year. It is important, therefore, to make sure that priests are present and officers have the chance to pray and receive communion.

Two-day exercises of the airborne forces in the Ryazan region featured the landing of a regiment mobile church. Paratrooper servicemen took part in the training exercise, together with military priests. Official spokesperson of the airborne forces, Col. Alexander Kucherenko, said that the priests jumped first and the church was successfully landed next.

“The priests made two training jumps from an An-2 plane, and then successfully jumped from an Ilyushin-76, following a platform carrying the chapel,” Kucherenko said. Later, the priests assembled the church on the ground with the paratroopers.

Defender of the Fatherland Day: A Moscow tour guide for real men

The mobile church is a large inflatable tent mounted on a special platform used to land military equipment and cargo. Religious paraphernalia were attached to the tent, including an altar, icons and other objects required for religious services – all of which was wrapped in foam to prevent breakage when landing. Icons in the church for airborne troops are mission-specific and made of vinyl.

The airborne troops noted that the first-ever deployment of the “flying” church was performed in accordance with established norms. Kucherenko explained that priests and servicemen deploy a similar, truck-based, mobile chapel within 5-7 minutes. The colonel described the workplace of the airborne priests as a rather imposing structure that measures 26 feet by 65 feet.

The Rev. Mikhail Vasilyev, head of the Airborne Troops Sector of the Synodal Department of the Russian Orthodox Church (ROC) responsible for cooperation with the armed forces and law enforcement agencies, told Gazeta.ru that 10 ROC priests regularly make parachute jumps.

“It’s a way of getting to those members of the church who work as paratroopers,” Vasilyev said.

He added that priests serve the army, helping servicemen “to make sense of the difficult and dangerous occupation of serving one’s country in the army.” 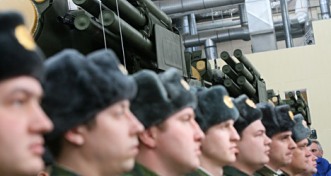 Plans to create mobile Orthodox churches for the airborne forces were first announced in March 2012. The Ministry of Defense said at the time that it had received a proposal to build airborne churches from the ROC. In February 2013, a mobile church mounted on the chassis of a KamAZ truck was presented to paratroopers in Ryazan.

There are representatives of other religious faiths in the Russian army, but, according to the priest, Muslims and Jews do not have an acute need for a temple: “Muslims and Jews don’t need a temple; they can pray anywhere and only need a rug. We, on the other hand, need a number of objects to use for rites and sacraments in church. This is a feature of our religion.”