Giving children with challenges a chance 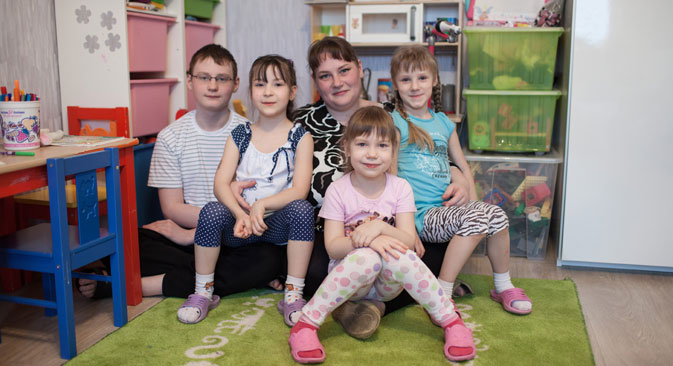 A mother tells how visiting orphanages inspired her to adopt two children rejected by other couples.

When Yelena Sheba, an affable 35-year-old economist and mother-of-two, first got the idea of adopting a child, she wanted a perfect baby. But after she visited some orphanages, Yelena says she started to realise that the children most in need were the ones she had to help.

“Like 90 percent of candidates, at first I wanted a healthy, beautiful, Slavic girl,” Yelena says in an interview in her small, two-bedroom apartment in a Moscow suburb. “But such children have the highest chance to find a family, after all. The biggest problem is children with serious diseases that wait for parents for years.”

An economist by training, Yelena joined the charity Volunteers for Orphaned Children five years ago. Now, in addition to their two natural children, Yulia, 6, and Andrei, 13, Yelena and her husband, Alexander, have two lively, adoptive six-year-old girls, Marina and Praskovya.

“I studied a lot but I’ve come to realize that my real calling is to be a mother,” Yelena says.

In harmony: Yelena Sheba’s ‘real calling’ was to be a mother. Source: Sergei Savostianov

The first girl Yelena adopted, Marina, was rejected by two couples who came to see her; Praskovya has a record of 30 rejections.

“The orphanage staff tried to talk us out of it,” Yelena says, as she recalls taking Marina from an orphanage in the Moscow Region. “They were like, ‘Why do you need this? This girl has a bunch of health problems.’” At Praskovya’s orphanage in the Astrakhan Region, Yelena says she faced a similar reaction from the staff.

The situation for Russia’s orphaned children is improving gradually, however. Orphanages are now much better funded, and there is greater understanding that children should be adopted by a family to prevent them becoming institutionalised. Grassroots organizations are also growing to support vulnerable mothers who might otherwise give up their children to orphanages.

However, huge challenges remain: At least 80 percent of orphans in Russia have at least one living parent, and in many cases the parents have been deprived of parental rights due to social problems such as alcoholism. There is also the problem of falling adoption rates, which Russian authorities are trying to overcome.

Adoptions by Russian families fell from 9,530 in 2007 to 7,416 in 2011, while the number of children placed in foster families dropped from 20,864 to 13,766 over the same period. In Russia, fostering is a long-term commitment to care for a child until their 18th birthday. It can also lead to full adoption, where a child legally becomes part of a family for life.

Having banned adoptions into American families on January 1, the government is going to pump more cash into the childcare sector to buck the declining trend.

“An orphanage is never interested in placing a child in a family,” says Marina Andreyeva, head of children placement at Volunteers for Orphaned Children. “The more children there are in an orphanage, the more funding it receives from the state.”

The requirements for would-be Russian foster parents are quite easy to meet: a package of documents, a medical check-up and a monthly income at least double the subsistence level in the region they live in. In addition, a foster parent needs to attend a series of training courses spanning seven to 10 weeks.

Foster families receive monthly payments from the state, with rates varying from region to region. In Moscow, a foster child receives between 12,000 and 15,000 rubles per month, and foster parents are paid 13,000 rubles per child. “It’s enough to buy food and clothes,” says Yelena Sheba.

Yelena’s daughters are lucky to have free certificates to Russia’s best clinic for children, the Filatov Hospital, and local kindergartens employ a variety of specialists to help foster children integrate smoothly in the community. In other regions, however, payments can be much smaller, and benefits more limited.

“In Moscow there are all the necessary conditions to take care of such children, and I think more of them should be placed in Moscow families,” Yelena says.

While foster families may have every opportunity to bring up a child, they often have to face a problem almost impossible to solve – hostility and intolerance.

“If your natural child acts up, is bad at school, or smokes, everyone explains it with puberty,” says Marina Andreyeva. “If a foster child does the same things, it’s more likely than not to be attributed to his poor heredity – even if no one knows for sure what his parents were like – he will be reminded where he comes from, and foster parents will be reproached for failing to take control of him.”

The problems of foster and adoptive families have received increasingly more attention lately as the government announced plans to encourage adoptions in Russia after banning adoptions into American families. Lawmakers and social security authorities are drawing up programs to raise payments for families and ease adoption procedures.

“In 2007-2008 the Moscow Region did about the same thing as the federal government is planning to do now,” says Marina Andreyeva. “It became the first region to introduce payments for orphans placed in families, and increased monthly payments for children, which resulted in a growth in adoptions, but two-three years later we saw an upsurge in the number of children returned to orphanages.”