The other side of Moscow 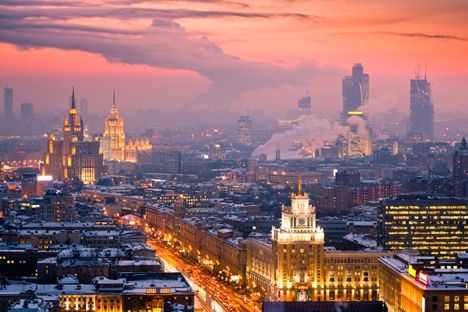 Many of the capital’s plants, factories and thermal power stations were shut down long ago, since Moscow ceased to be an industrial centre. But some of the grey industrial properties seethe with life.

As of today, there are 209 industrial areas in Moscow. These are vast territories, where many plants and factories were shut down years ago and production stopped. Investors get giddy over the more than 20,000 hectares of land. Industrial areas account for 20 percent of the total area of the city and Moscow officials have admitted that these areas are used quite ineffectively.

Many industrial properties lie close to the centre of the city. Some of them were built around a hundred years ago. These areas are more than just industrial sites – these are culture monuments and Moscow’s legacy. Some of them live a happy life in contemporary Moscow.

Art Strelka is one of the first Moscow projects to follow the global gentrification trend. Back in the early 2000s, several deserted garages on the premises of the former Krasny Oktyabr confectionery were occupied by artists. Then came the businessmen, putting an end to the reconstruction project. Krasny Oktyabr operated as an exposition centre from 2004 to 2009; the land was leased by independent galleries. The centre became something of a legend during its short life. Artist Vladimir Dubossarsky wanted Art Strelka to represent all contemporary arts.

Although Art Strelka has closed, the former factory remains a busy art centre – the Krasny Oktyabr art cluster borrowed the name of the confectionery. The cluster features some Moscow’s most notable landmarks, including the Strelka Institute for Media, Architecture and Design; the Dozhd television channel; Bolshoi Gorodmagazine; the Snob project; and the Gipsy, Rolling Stone, Reka and Art Academy bars, among other things.

There are no final plans to redevelop the area of the former sweets factory. One option is to build luxury housing here, with prices of $25,000–30,000 per square metre. Chief Architect of Moscow Sergei Kuznetsov believes that people should live and work at Krasny Oktyabr. “Krasny Oktyabr is a perfect site for a symbiosis of the new and the old,” he tells The Village online magazine. “But this space needs to be completed and turned to face the entire city,” Kuznetsov says. In other words, there are no plans to shut down the Krasny Oktyabr facilities.

The old red-brick factory has preserved its charm and turned into one of Moscow’s major culture projects during a very short period of time. Winzavod was unveiled in 2007 on the premises of the Moscow Bavaria brewery (which was later turned into a winery). The area next to downtown Moscow plays host to the most important exhibitions (including the Best of Russia exhibition), lectures, exclusive film shows and jazz soirees. Winzavod is also home to a number of unique shops, restaurants, creative workshops, showrooms and schools. The main art galleries of the city are residents of Winzavod, including the Marat Guelman Gallery, which looks for young talent in Russia and promotes Russian art abroad, and the Regina Gallery, which was established more than 20 years ago and moved to Winzavod only recently.

ArtPlay is a whole culture district. It is located in the former industrial buildings of the iron foundry Manometr (established in 1886). ArtPlay didn’t originally occupy this area, which is next to Winzavod: its first residence was the former factory Krasnaya Roza, which a couple of year ago became the headquarters of Yandex, Europe’s largest IT company.

ArtPlay completed a cycle at Krasnaya Roza, evolving from the ruins of the decrepit workshops to a brand new business centre. It is now a specialised business and commercial centre that brings together architects, designers and engineers, as well as suppliers of furniture, lighting, finishing materials and special equipment. ArtPlay focuses on architecture and design, with 70 design bureaus and studios, the British Higher School of Art and Design and 8000 square metres of display area.

Arma is referred to as a creative zone. Arma is the former Moscow Gas Plant, built in 1865 by British companies on commission of the Moscow City Duma. The plant was supposed to produce gas for Moscow street lamps. The area is currently occupied by shops, design studios, business centres, concert venues and even sports clubs. Russian designer Denis Simachev has his office here.

It was announced last autumn that the Moscow authorities had plans to create an art district near the Yauza River around ArtPlay, Winzavod and Arma. The art district project was supported by the mayor’s office and chief architect Sergei Kuznetsov. The art district should be comfortable for all manner of artist. The district may take up to ten years to be established. The plan is to build housing in the area, which will have bicycle tracks and enjoy a complete ban on motor vehicles. “In a contemporary city, a district with design and architectural firms, art studios, galleries and film studios – a whole creative cluster – is a matter of good looks and prestige,”  Kuznetsov told Afisha magazine.

Other Moscow industrial properties have also been given new life. Moscow’s oldest industrial area – ZIL – will be turned into a ‘city within a city’, with automobile production facilities, housing and infrastructure. ZIL will have up to 5 million square metres of property built and reconstructed. Most of the area will be given to hotels, museums, stores, parking lots, research centres and high-tech productions.

Sergei Kuznetsov said in an interview with RIR: “We need to turn Moscow into a city in the true sense of the word.” He mostly supports the transformation of industrial areas into new culture and business landmarks, which gives hopes of a radiant future for industrial sites of Moscow. “No other major city has so many industrial zones, Kuznetsov told Vechernyaya Moskva in an earlier interview. “We have to develop these areas, give them over to investors. The city is losing money on them. Nothing is going on there. The city fabric must be of a totally new design.”