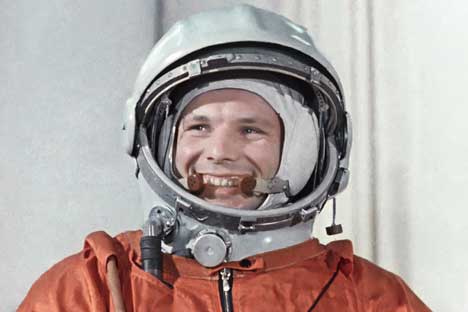 Yuri Gagarin, the first man to fly into space, completed an orbit of the Earth on the Vostok spaceship on 12 April 1961. To commemorate the event, every 12 April Russia celebrates Cosmonautics' Day.

In the pantheon of cosmonauts – and astronauts – Yury Gagarin is a kind of god. It didn’t matter that he stood just 5 feet 2 inches tall, or that he traveled to space just once. Like Prometheus – in Greek mythology the first mortal to experience the warmth of fire – Gagarin discovered something novel for humans. After his epic journey the heavens on April 12, 1962, the sky – previously just the realm of the gods, was open to members of the human race. In 108 minutes, science fiction became scientific fact.

Dream started in a WWII dogfight

But this nearly never happened. During World War II, German troops occupied Gagarin’s home village of Klushino in the Smolensk Region, about 100 miles west of Moscow. Yury and his brother Boris sabotaged the German garrison in Klushino. They mixed chemicals in battle tank batteries and blocked their exhaust pipes with raw potatoes. For this, the German hanged Boris from a tree (although their parents rescued him before he died). Yury escaped a similar fate because the Germans thought he was too young and harmless to be hanged.

The town of Korzunovo, forgotten service place of Yuri Gagarin

During the occupation, the young Gagarin witnessed a dogfight between Soviet Yak fighters and Messerschmitts. One aircraft from each side was shot down, and the Russian pilot ejected just outside Klushino. The villagers rushed to pick up the downed pilot and brought him inside. Curious, Yury went to visit the pilot and was captivated by the man’s persona. As the Russian rescue crew arrived and the injured pilot took off in another aircraft, Yury knew what he wanted to become – a fighter pilot.

It was the right decision at the right time. Gagarin was the perfect poster boy for the Soviet space program. He was the son of a carpenter and therefore fit perfectly with the image of the working-class hero the Soviets wanted to project. His height also made him well-suited for the cramped interiors of the early re-entry vehicles.

Gagarin was also good-looking and charismatic. German Titov, who narrowly failed to become the first man in space, said 59 years later that his superiors had made the right decision choosing Gagarin: “Yury turned out to be the man that everyone loved. Me, they couldn't love. They were right to choose Yury,” he told the authors of Starman, The Truth Behind the Legend of Yuri Gagarin.

As Lev Danilkin writes in Gagarin: Man and Myth: “It is not clear exactly who first decided that on the evening following the dawn of the space age Gagarin should go travelling and pay a few visits but, in any case, all the countries of the world started vying with each other to invite him to come and see them.”

After predictable visits to Soviet bloc satellites, Gagarin visited the UK, where the crowds who gathered to watch him arrive on the road to Heathrow were as big as those along Moscow’s Leninsky Prospekt.

Gagarin’s accomplishment still reverberates around the world. Without his audacious leap into space, NASA may not have gone for the moon shots. The Space Shuttle would have remained in the realm of science fiction.

The writers of myths say the gods become jealous of extraordinary men. They did not forgive Prometheus for daring to steal their fire. Gagarin died tragically and young. But perhaps the Soviet major couldn’t have asked for a different ending. While we will picture the likes of Neil Armstrong and John Glenn as crusty old men, Gagarin will always be seen as the icon he was when he flew to the stars.