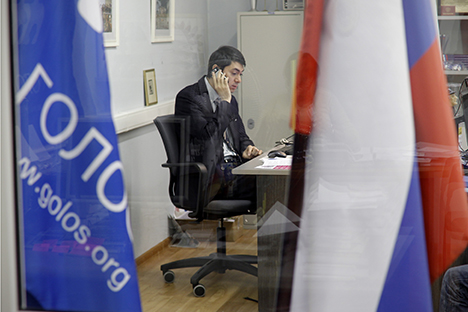 Golos association deputy direcor Grigory Melkonyants has been challenged with the administrative charges from the Ministry of Justice. Source: AP Photo / Ivan Sekretarev

The Russian law enforcement authorities have, for the first time, begun enforcing the law that requires nonprofit organizations be registered as “foreign agents” if they are financed from abroad. The election watchdog Golos has taken the first hit, accused of receiving over $65,000 from Europe and engaging in Russia’s political affairs.

The Ministry of Justice has opened an administrative case against election watchdog Golos for violation of the law on nonprofit organizations.

The law mandates that any organization involved in political activities and financed from abroad has to file for “foreign agent” status.

In this case, the “foreign financing” is assumed to be the Andrei Sakharov Freedom Award of €50,000 ($65,470), granted to Golos for its “outstanding efforts to promote democratic values” by the Norwegian Helsinki Committee in September 2012.

RusGolos may be fined 500,000 rubles for not registering as "foreign agent"

“The association is simultaneously involved in political activities in Russia,” a source in the Russian Ministry of Justice said.

The political involvement, in turn, actually comes down to a draft Election Code the association put together five years ago, in the hopes of making the election process more transparent.

“Public events and moves orchestrated by the association are aimed at affecting decisionmaking by government agencies and shaping public opinion,” said the Ministry of Justice source.

Thus, according to the ministry, the association is actually violating the law on nonprofit organizations in not applying for “foreign agent” status.

Golos has been operating in Russia since 2002, focusing on training observers for elections at all levels, as well as monitoring voting irregularities.

The association was particularly vocal during the December 2011 parliamentary election, when it actually set off the For Fair Elections movement – the main organizer of the mass protests.

The administrative case will be tried in court, with a hefty penalty likely to be imposed on the election watchdog. If the organization refuses to register as a foreign agent after paying the penalty, it will be wound down.

A spokesperson for Golos announced the association had no plans to register as a foreign agent, arguing that it had long since spent the grant received from USAID (United States Agency for International Development) before the “foreign agents” law came into effect in Russia and did not accept the Andrei Sakharov prize.

Furthermore, Golos does not believe it is involved in political activities, since the amendments to the election laws it has been working on are being drafted on behalf of the people rather than specific political forces.

Igor Borisov, a member of the Public Chamber, is convinced that the Ministry of Justice's accusations against Golos are well justified.

“The Justice Ministry's demands and moves are not aimed at shutting down or even suppressing the activities of the organization in question. It merely demands that the law be observed,” he told RIA Novosti.

“One thing we know for sure about Golos is that it is clearly involved in politics, trying to influence or actually influencing public opinion and decisionmaking by relevant government agencies.

It has also continued, even after the 'foreign agents' law was enacted, to receive foreign financing, ignoring the requirement of the Russian law that it register with the Ministry of Justice,” said Borisov.

According to Oleg Orlov, a human rights lawyer for the Memorial Human Rights Center, Golos is involved in civil monitoring activities to ensure fair elections in Russia rather than politics.

“It is unclear why the organization would be required to call itself a ‘foreign agent',” the human rights activist stated in an interview with RIA Novosti.

This article is based on materials published by Kommersant, RIA Novosti and Gazeta.ru.