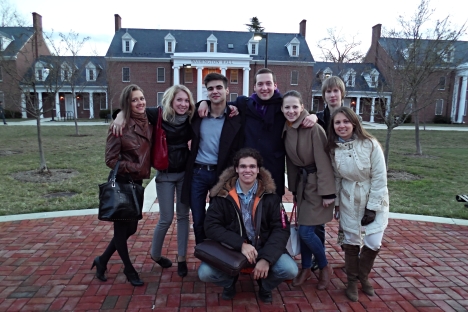 This spring, students from the School of World Politics at Moscow’s Institute for U.S. and Canadian Studies (ISKRAN) traveled to the United States. Source: Press photo, Antonio Fragoso

This spring, students from the School of World Politics at Moscow’s Institute for U.S. and Canadian Studies (ISKRAN) traveled to the United States. Source: Press photo, Antonio Fragoso

A more intense spotlight shines on educational cooperation as Russia and the United States seek fresh perspectives on bilateral relations despite recent shadows cast on the reset.

The Center for International and Security Studies at Maryland (CISSM) has been bringing together U.S. and Russian security experts since 2001, with the aim of becoming an incubator for a new generation of security experts – amidst a generation with no memories of the Cold War.

This spring, students from the prestigious School of World Politics at Moscow’s Institute for U.S. and Canadian Studies (ISKRAN) traveled to the United States. In 2013, eight fourth-year ISKRAN students, selected on a competitive basis, spent a packed week at the end of March at CISSM at the University of Maryland in College Park.

Before leaving Moscow, students prepared for their forthcoming trip with a discussion in the pre-Revolutionary Moscow mansion that houses ISKRAN. But they also had animated conversations about what to wear on the trip, what souvenirs they would buy and whether they would go to McDonald’s.

The students received a brief talk from Sergei Rogov, ISKRAN’s longtime director: “The Center for International and Security Studies at Maryland, which is headed by John Steinbruner, is our primary partner,” he told the students. “I got to know Steinbruner in 1977; he’s one of the leading American experts on international security issues, and I’ve learned a lot from him. He’s someone who was always a supporter of Soviet-American cooperation.”

The Russian students who were allowed to travel to the United States were those who had performed well during their term of distance learning with Steinbruner. “The professor gave a lecture at the University of Maryland, and it was posted on the Internet with a presentation and questions. Then we wrote two essays – one on Iran and another on missile defense systems and nuclear disarmament,” said Anastasia Panova, 21, a student selected for the exchange trip.

A main aim of the exchange is to get the students’ active in policymaking. They create joint memorandums for the Russian and American presidents which are then posted on the CISSM website. The documents are then discussed at the University of Maryland and defended before the curators of the project, John Steinbruner and Nancy Gallagher, associate director for Research at CISSM.

“Our International Security Policy class looks at past, current, and future security problems not only from a U.S. national security perspective, but also from the perspective of Russia and other leading countries,” said Gallagher.

“But the interactions with the ISKRAN students are often the first time that the CISSM students have had an opportunity to discuss what they are reading in class and in the news with their Russian counterparts. This provides a wonderful opportunity for young people who will become influential in the U.S. security policy world to ask questions about Russian thinking, see diversity in Russian views, and get Russian reactions to current U.S. policies, and explore opportunities for more effective and extensive U.S.-Russian security cooperation,” she said.

Svetlana Babich, who teaches at ISKRAN in Moscow, was in charge of the group. “The trip is an essential role-play exercise for them, in which they must learn to interact with another country with which we sometimes have difficulties, and I’ve often seen our students fight like lions there,” she said.

Upon their return to Moscow, the students noted that the experts’ views were diverse and candid. Several said that their meeting with Brzezinski was especially memorable: “When we asked him whether he had changed his attitude to Russia, he remarked that he had not changed his attitude, but Russia itself had changed a lot, and he liked these changes with regard to the political situation and the development of civil society,” recalled 20-year-old Kristina Morogina.

Twenty-year-old Nikita Zharkov, who led the group discussing the memorandum on nuclear security, spoke about his meeting with James Collins: “He noted that if we’re to improve the situation we need to take real steps, not just constantly sit at the negotiating table, and provide real guarantees on nuclear disarmament. Make concessions, don’t just think about making them.”

Despite the fact that the U.S. Congress passed the Magnitsky Act and the Russian Duma passed a ban on American adoptions, the students spoke positively about Russian–American relations. They said that they would like to see the issue of international nuclear arms security gradually become a thing of the past and more attention paid to the development of economic relations, cultural and scientific cooperation, and student and professional exchanges.

“Many Americans have heard little or nothing about the Magnitsky Act, and it seems to me that this issue is reported more in the Russian media; even in light of recent events they don’t have a very negative attitude towards Russia,” said Zharkov.

Igor Dayev, 20, agreed: “The idea of the bears in Red Square has already disappeared, and the vestiges of the Cold War are fading away. We asked [the American students] informally how we differ from them, essentially, and they said that we dress in a very beautiful and stylish way. It was a pleasant surprise for me to hear that.”

The Russian students lamented the fact that the exchange, which is financed by the Carnegie Foundation, only operates in one direction: They would like the American students involved to come to Moscow. The ISKRAN students talk with their American colleagues through video conferencing during the academic year, but as Anastasia Panova said, “The trip is a revelation in many ways. You understand what the American view of things is, rather than just getting your information from the media at home.”