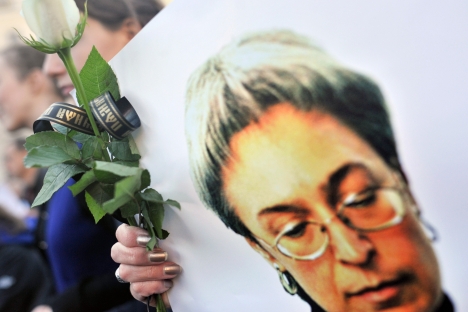 Russian investigative journalist Anna Politkovskaya was murdered on October 7, 2006, because of her professional activity. Source: ITAR-TASS

The Russian Investigative Committee has completed its inquiry into the murder of Russian investigative journalist Anna Politkovskaya. Meanwhile, the defendants deny their guilt and want to be tried by jury.

The Russian Investigative Committee has announced that it completed its inquiry into the assassination of Novaya Gazeta investigative journalist Anna Politkovskaya.

"Investigators have collected sufficient evidence, allowing them to forward the criminal case to the Prosecutor General's Office of Russia, which will confirm the indictment and send the case to court," the Investigative Committee said in a press release seen by Interfax on Thursday.

There are five defendants in the case. The suspects are Lom-Ali Gaitukayev, the Makhmudov brothers - Rustam, Ibragim and Dzhabrail, and former policeman Sergei Khadzhikurbanov. They face charges of murder and illegal possession of weapons.

At the same time, the defendants have asked the court to be tried by jury.

"A request for a jury has been filed," lawyer Alexei Mikhalchik, who represents interests of Khadzhikurbanov, told Interfax. "My client does not admit his guilt. We plan to present proof of his innocence to a jury. If the trial is unbiased, we are confident of a not guilty verdict."

The defense teams have some complaints regarding the investigation procedures, Mikhalchik said.

"They will possibly be aired at the preliminary hearing phase, and we will ask the prosecution authorities to eliminate these irregularities," he added.

The criminal inquiry started against Dmitry Pavlyuchenkov, who reached a pre-trial deal with the investigation, was handled separately, " the Investigative Committee said. The man has already been sentenced to 11 years in a high-security prison for helping mastermind the crime.

Novaya Gazeta observer Anna Politkovskaya was killed in the hallway of her Moscow house on October 7, 2006.

Pavlyuchenkov pleaded guilty as he entered a plea bargain with the prosecution. He claimed that businessman Boris Berezovsky and Chechen separatist envoy Akhmed Zakayev had ordered the crime.

Criminal charges were brought against brothers Rustam, Ibragim and Jabrail Makhmudov, Sergei Khajikurbanov and Lom-Ali Gaitukayev. They were accused of murder and illegal arms turnover.

Rustam Makhmudov was called the perpetrator of the murder. He was detained in Chechnya on May 31, 2011, and brought to Moscow for investigative procedures.

Detectives believe that the crime was organized by Lom-Ali Gaitukayev. In 2006, he formed the organized group that united the suspects. According to the Russian Investigative Committee, the group thoroughly planned the murder of Politkovskaya, acquired weapons and conspired, while Khajikurbanov supervised the group's activity.

Former police officer Khadzhikurbanov is currently serving a prison sentence after being convicted of another crime. But he was transported to Moscow, where he will appear before court in the Politkovskaya murder trial.

Meanwhile, the lawyers for the family of Politkovskaya have refrained from making statements on the guilt of the suspects, leaving it to the court to decide on the matter.

"I know the Constitution and the concept of presumption of innocence. The court will decide if they are guilty or not," said Anna Stavitskaya, a lawyer for the Politkovskaya family. "When it comes to deliberations and if we find that they are proven guilty in court, there will be one position. Otherwise there will be a different position."

The article is a combined report based on material from Interfax.

The information in this section is provided by the Interfax news agency and is intended for personal use only. It may not be reproduced or distributed in any form without express permission from Interfax. To request permission to republish, email:ifaxru@interfax.ru