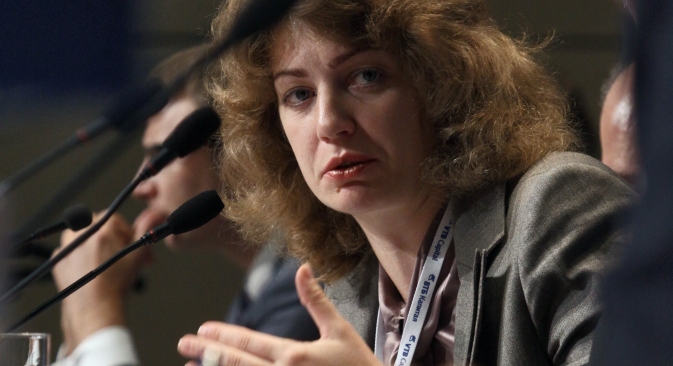 It’s a tough and dangerous business and economically, journalism is wildly insecure. But some of Russia’s independent print journalists say their work is at a higher level than ever before.

Elizaveta Osetinskaya, the husky-voiced, world-weary-at-36 editor-in-chief of the Russian edition of Forbes Magazine, made a statement that seemed to surprise audience members at the forum, “The Future of Investigative Journalism in Russia,” at the Wilson Center on Friday, April 12.

“Investigative journalism is getting better,” she said.

“If we are talking about the quality of investigative journalism in Russia, it has significantly increased in the past 15 years,” she said, “ and it continues to be at a high level,” speaking of independent print journalism. “If you are financially independent, it’s harder for the government to call you and ask you not to publish something,” she added.

In Soviet times, there was no culture of investigative reporting. Today, Russian and international records are open for reporters to search—from the Central Bank of Cyprus to Stasi files on public and private citizens. Many stories come from careful searching of open records as much as off-the-record sourcing and leaks.

Osetinskaya and her colleagues said they were wary of bloggers and the lack of evidence and confirmation in some of the eye-grabbing stories posted on the blogosphere.

Their tenacious and brave coverage of terrorism, state corruption and conflict despite low pay, job insecurity and high risks seemed only to prove Osetinskaya’s point of great work under bad conditions.

Elena Milashina has been an investigative reporter for 16 years. She reports for independent newspaper Novaya Gazeta. She got her first break covering the sinking of the Kursk submarine.

Her contacts within the Russian Navy guided her toward the discovery of a cover up—authorities did not want Russia to know that 23 of the 118 sailors aboard the submarine had survived the explosion long enough to gather together and write notes to their families and commanders and the world outside.

“I am still covering this story,” Milashina said. “Russia still does not have the proper rescue equipment” for torpedo submarines to this day, she added.

Last month, on March 8, she received the U.S. Secretary of State’s International Women of Courage Award for her bold work as a journalist in Russia.

“Elena Milashina is one of the most influential and respected journalists in Russia,” said Secretary of State John Kerry. “She’s built a career investigating drug trafficking, terrorism, military disasters, and the killings of fellow journalists,” Secretary Kerry said.

Milashina is probably best known for her tireless coverage of the 2004 Beslan Siege. She is one of the few reporters who stayed with the story long after the botched end to the hostage crisis left more than 300 dead, 186 of them children. She wrote about the community’s efforts in the years since to investigate what happened and receive compensation for those who survived.

The award-winning journalist has uncovered so many inconvenient truths that she is often threatened. She was attacked in Beslan once in 2004, and badly beaten outside of Moscow a year ago on her way home from work.

The journalists talked candidly about the dangers they face and the colleagues and friends they have lost. A former editor-in-chief of Forbes, Paul Kebnikov, was gunned down on the steps of his office building. Anna Politkovskaya and Natalya Estemirova, who investigated human rights abuses and extrajudicial killings in Chechnya, were also killed. Prominent journalist Oleg Kashin was brutally beaten within an inch of his life.

Crusading journalist Mikhail Beketov, founder and editor of the Khimki newspaper, died a week ago on April 9, 2013. Beketov suffered brain injuries after a vicious beating in 2008 and died as a result of complications from the beating. He was 55.  He had been known as a forceful advocate for the movement to save the Khimki Forest from highway construction.

Beatings of journalists who expose corruption are commonplace, but rarely are assailants found and brought to justice. It is even more rare for investigators to find out who ordered the attack, the journalists at the Wilson center said. (The event was sponsored by Columbia University’s Harriman Institute and Miami University’s Havinghurst Center for Russian and Post-Soviet Studies in Ohio.)

Yet the group seemed more concerned about economic threats than physical attack. They each spoke fervently about the steady erosion of funding for deeply reported long-form enterprise journalism as opposed to blogging and aggregating.

Svetlana Soprunova, who writes under the name Svetlana Reiter, had an announcement to make at the forum.

“I have just read that my newspaper, Bolshoi Gorod, may decide to close in the next hour,” she said. “And five to six magazines have closed recently. In the case of Bolshoi Gorod, “the problems are economic,” she added, “not censorship. This is a real issue for us.”

Reiter has written about the work of the Committee against Torture in Chechnya. She also covered recent elections as well as the legal cases of protesters who were arrested during or after protests on Bolotnaya Square.

“If you are working for independent newspapers, you have to face the fact that many are dying.  In that way, we have problems quite similar to those in the United States,” Reiter said. She added that Russians are tired of opposition coverage in the way that Americans easily tired of Occupy Wall Street coverage.

“Still, there are fewer and fewer titles where journalists can be trained,” said Osetinskaya, who added that journalism schools in Russia are not doing their job. “I feel a significant lack of education and we need help with training programs for junior journalists.”