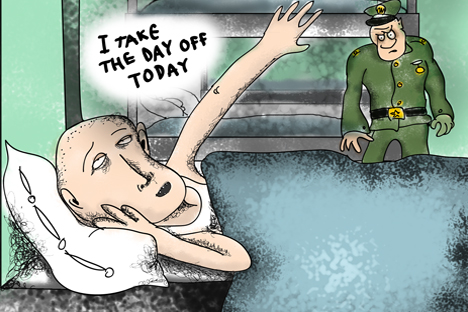 Following reforms undertaken by former Defense Minister Anatoly Serdyukov, contract service in the Russian military has become competitive on the labor market. The Ministry of Defense is planning to spend $1.6 billion through 2015, to further promote military service under contract. However, conscription will not be abolished, as Russia wishes to maintain a mobilized reserve.

By 2017, the Russian Ministry of Defense plans to increase the number of troops up to 425,000, for service under contract in the ranks and the sergeant corps. This represents almost two-thirds of the required number of soldiers performing military duty under conscription.

The announcement was made at a meeting of the Committee on Defense and Security under the Council of the Federation.

The keynote speaker, Deputy Defense Minister Nikolai Pankov, stated that, in the second quarter of 2013, the Ministry of Defense (MoD) plans to take on at least 18,500 service personnel under contract.

"The Q1 targets were fulfilled by 107 percent," said Pankov.

Meetings of the committee are not public events, so the figures quoted generally reflect the real picture – and the introduction of military contracts for rank-and-file soldiers and sergeants would be a worthy achievement.

The issue of army staffing on a contract basis was first raised in 2004. However, the process was left to meander until 2012. One of the main reasons for this was the very low level of appeal of military service among young people – at least in terms of wages.

According to data from the Federal State Statistics Service for that period, the average salary in Russia was almost 18,000 rubles ($567) per month, while the starting salary for contract service personnel was 8,000 rubles ($252).

Moreover, like draftees, contract soldiers were obliged to live in barracks, perform chores and request permission from their commanders to leave the military unit.

Generally speaking, the army's recruitment of contract soldiers did not improve the quality of personnel, but only increased the financial outlays – despite the fact that 70 percent of them were immediately dismissed after the first 3-year contract. As a result, the appearance of professionals had no effect on the army's combat capability.

Last year was a turning point. As part of the military reform carried out by former Defense Minister Serdyukov, a new salary scheme was introduced on January 1, 2012.

Military service under contract has become competitive in the labor market.

Another major breakthrough was the change in the social status of contract soldiers in the army. Instead of barracks, they were offered places in a navy-style dormitory – i.e., two-bedroom apartments with amenities.

Married service personnel were allowed to live outside the territory of the unit, and the MoD even decided to bear some of the cost of renting the accommodation.

The rules of service have also been amended. Whereas, before, contract soldiers did not have the right to leave the unit without the permission of the commanding officer, now, they are free to do so at the end of the work day if no combat drills are scheduled.

Contract servicemen have the opportunity to receive higher education, which the MoD considers to be an incentive for career development. The department believes that officer positions should be occupied by people with firsthand experience of military service.

The outflow of contract soldiers was stemmed by allowing them, as well as officers, to become part of the mortgage system. The catch is that the army will pay the mortgage payments as long as the soldier is still serving. If he decides to break off relations with the MoD, the full burden of the mortgage will fall on his shoulders.

These measures have enabled the MoD to fill nearly all the most technologically complex positions in the air-space defense and strategic missile forces, the navy, the air force and units under the command of the Main Intelligence Directorate with contract service personnel.

Still, the priority at the moment is to increase the share of contract service personnel in the ground forces. To that end, 2013-2015 will see the allocation of 51.8 billion rubles ($1.6 billion) to promote military service under contract.

Some of the funds are due to go toward improving the recruitment procedure, while some will be directed toward building new accommodations.

Be that as it may, the new corps of military personnel serving under contract will have no effect on Russia's system of conscription – and not even due to the cost of maintaining a hypothetical professional army.

For comparison, the money presently being assigned to promote military service under contract far exceeds the amount requested by the General Staff in 2004 to fully transition the army to a contract basis.

The reason is that the MoD continues to focus on the debatable but highly tenacious idea that, in the event of a large-scale military conflict, Russia will require a mobilized reserve. There is only one way to ensure such a reserve – keep drafting youngsters.