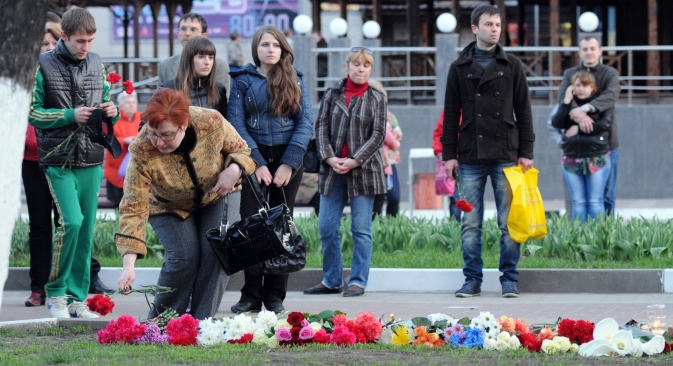 Yesterday’s deadly rampage in the Russian city of Belgorod, which left at least six dead (including a 14 year old girl), has lawmakers blaming the national media and calling for a legalization of arms. Yet pundits warn against it

On Monday, 32-year-old Sergei Pomazun walked into the Okhota shopping mall in the Russian city of Belgorod at two in the afternoon and shot three sales associates. He then went outside, shot another three people and fled the scene of the crime in a jeep.

According to preliminary reports, the suspect had already served a four-year jail sentence during which he was reported to be psychologically unstable. Local police are offering a $100 thousand reward for information leading to the suspect’s capture as they continue an around-the-clock manhunt involving over two thousand law enforcement officials.

“We’ll never see an end to this sort of violence because of its morbid vanity – to leave life so that people speak of you two or three weeks afterwards. Look at Boston; look at Belgorod,” Vladimir Zhirinovsky, the controversial leader of Russia’s Liberal Democratic Party (LDPR), said.

“I always said: classify this information. You are replicating mass murder. They see that the entire world is on its tiptoes, and they want to be part of the action,” he said.

Zhirinovsky pointed out that murders and robberies take place every day, but they don’t receive the attention of a shooting spree.

However Georgy Chizhov, an expert from the Center for Political Technologies, believes that censorship will not help. Chizhov sees no reason for shifting responsibility to the media. “These attempts [to blame journalists] are not new,” he said. “But censorship is not the best way to deal with a problem in a society of open information.”

Evgeny Minchenko, Head of the International Institute for Political Expertise, agreed. “Media doesn’t influence the crime rate in our society,” he commented.

Zhirinovsky’s colleague in the State Duma, fellow LDPR member Vladimir Ovsyannikov, called for legalizing handguns in response to the violence.

“If, when this crime occurred in Belgorod, two or three armed guys had been nearby, they would have used their weapons in self-defense and to protect victims from this scoundrel,” he said. “We’re denied a right to self defense. That’s the problem with our government.”

“There’s no guarantee a crazy person won’t get a gun and [kill people],” Chizhov explained, adding that the gun issue constitutes a double-edged sword. “Russia is not ready for the large-scale legalization of guns, but we should keep looking at this problem to come up with a national program for allowing guns.”

“We don’t have a gun culture in Russia and, if guns are legalized, our society will only become more dangerous,” said Minchenko.