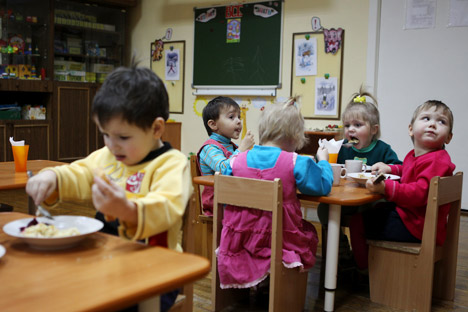 The Health Ministry said it had proposed amendments to the list of diseases that banned their carriers from adopting children. Source: RIA Novosti / Konstantin Chalabov

Currently, all Russians with infections like HIV or hepatitis B and C are obligated to register with their local clinics. A 1996 law prohibits people registered as HIV-positive to adopt children.

Russia’s Health Ministry has asked the government to allow people who are HIV-positive or have hepatitis B and C to be eligible to adopt children, according to a letter obtained by The Moscow News.

In the letter, addressed to the Education and Science Ministry and an NGO for women with HIV, the ministry said it had proposed amendments to the list of diseases that banned their carriers from adopting children.

Currently, all Russians with infections like HIV or hepatitis B and C are obligated to register with their local clinics. A 1996 law prohibits people registered as HIV-positive to adopt children.

Now, the Health Ministry said that due to medical advances enabling HIV-positive patients to lead normal lives, “the registration of patients [as HIV-positive] cannot be a criterion based on which the possibility of him or her becoming a parent is evaluated.”

The proposal – which has yet to be accepted by the government – comes after years of efforts by NGOs like E.V.A., an organization for HIV-positive women, to change legislation and allow those infected to adopt.

“In four years, this is a lot of progress – the Health Ministry has changed its mind,” E.V.A. head Alexandra Volgina, one of the recipients of the letter, told The Moscow News.

“I’m really hoping they will accept the proposals in the government. It’s a disease that has been taken under control, and has changed a lot since 1996, turning into something that doesn’t pose any danger.”

Concurrent with the ban, however, the Kremlin has been encouraging more Russians to adopt, and has pledged to simplify adoption procedures for Russians.

In light of that, the Health Ministry’s proposals would help HIV-positive children find homes, according to Volgina.

“I think this would be logical, given the number of HIV-positive children whose parents have adopted them, who have limited options in terms of being adopted abroad,” Volgina said.

Government officials sounded open to the proposal, but there were still challenges in lifting the limitation, Kommersant reported.

“If the Health Ministry believes that these diseases in adoptive parents do not pose a danger to the child, then the proposal will be considered,” Alexei Levchenko, a spokesman for Deputy Prime Minister for Social Issues Olga Golodets told Kommersant.

But the proposal could face obstacles on a social level, a State Duma deputy said. “Russian society is absolutely unprepared for this decision. There are a great number of fears and myths, partially justified by the absurdity of our lives, when a large number of people get infected with AIDS in medical facilities,” Sergei Kalashnikov, head of the State Duma Health Committee, told Kommersant.