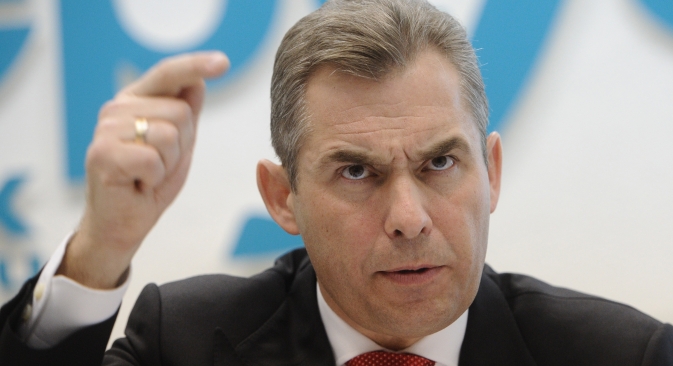 Russian Children's rights ombudsman Pavel Astakhov is concerned with a recent case of Polina Lykho who has had her 6-week-old daughter Viktoria separated from her in New Zealand. Source: ITAR-TASS

A 6-week-old baby is about to be returned to her Russian family, after spending four days in foster care in New Zealand. The events surrounding the child’s custody drew vehement reactions from Russian officials and the Russian blogosphere.

The baby was taken away from her family on April 19, on grounds of suspected abuse. Her parents, Polina and Artem Lykho, could not explain a fracture in one of her ankles when they showed her to a local doctor. The case was reported to the childcare service, and the girl was temporarily placed in foster care. Police are still investigating how Victoria became injured.

Court in Finland refuses to return children to Russian mother

“They took her away into a family of strangers, no one would tell us where she was,” said Yelena Arkhangelskaya, Polina Lykho’s mother, who lives in Moscow.

“I shudder to think a stranger could be touching my granddaughter. There’s no reason why my children should be put through something like this,” Yelena said.

“Polina couldn’t breastfeed her, and social workers promised to come twice a day to take her breast milk she’d have pumped into a bottle, but they would never come on time or without a reminder,” said Yelena. “How do we know they didn’t give her some formula instead of breast milk?”

On April 22, childcare authorities met with Polina and Artem Lykho to show them their daughter. They concurred that Victoria should be returned to her family under the guardianship of Artem’s mother, Zoya Lykho, who is based in Auckland. The Lykho couple was assured that, after paperwork is completed, Victoria will be returned home.

In a statement released on April 23, Paula Attrill, the director for operational risk management at Child, Youth and Family, argued that “every step in the process to date has followed New Zealand law, which requires doctors to report suspicious injuries to children.”

Attrill emphasized that she understands how hard it is for the whole family to have had Victoria taken away.

“However, our legal responsibility is the safety and well-being of a vulnerable baby,” she said. “Since the police investigation has not yet finished, Victoria will remain in the care of Child, Youth and Family for longerl. However, the parents will be briefed every step of the way and will have access to Victoria.”

“Despite concerns they had raised, the social workers understand that it’s a normal family and the baby should stay with her biological parents,” said Commissioner Pavel Astakhov. “At the same time, they want a guarantee from the family that the girl will be safe. I’ve called on New Zealand’s prime minister and the Russian Foreign Ministry to follow up [on] this case.”

On her Facebook page, Polina Lykho thanked “everyone who was worried and helped and wanted to help.” She also cited her family’s attorney as saying he had “looked through the case to find that some things are out of normal practice for such a harsh decision to be made.”

In its statement on April 22, the Russian Embassy in New Zealand pledged to “carefully observe the situation wherein a child was removed from her Russian citizen parents.”

Polina, 19, moved to New Zealand in 2010 to pursue a Master of Business Administration and later married Artem Lykho, 25, who works at his mother’s design bureau in Auckland.

This is not the first time a child was removed from a Russian family by international childcare services. Six Russian mothers have reported being separated from their children by Finnish authorities since 2008, when Finland strengthened its childcare legislation. Commissioner Astakhov has referred to those cases as kidnapping.