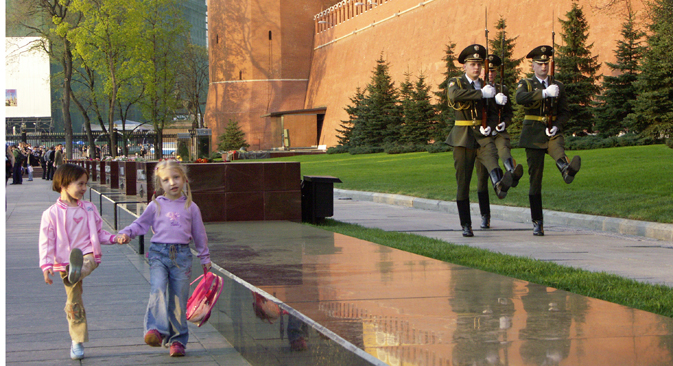 The May holidays in Russia has always celebrated with great pride. Source: Dmitry Korobeinikov / RIA Novosti

In early May, Russians have two bank holidays in quick succession, both inherited from the former Soviet Union. This sometimes translates into as many as nine days off work – plenty of time to head for warmer climes, though many will opt to stay at home. For the latter, there will be numerous recreational activities in Moscow for the long holiday.

For many Russians, the bank holidays in early May have long become a second annual leave. The two holidays are separated by three work days. Almost a quarter of Russians take those three days off as well, to have a long, uninterrupted period away from work.

Far from everyone does this, however. In fact, more than a half of Russians prefer not to take the extra days between the two holidays, according to a study by Superjob.

“If you travel somewhere during this period, it can be quite expensive; and if you choose to stay home, the two bank holidays themselves are enough," one of those polled said. “I am paid for results, so I cannot afford to take extra days off," said another.

“I will go somewhere nice later in the year, and use the bank holidays to catch up on things at home.”

Of those who will stay home in early May, almost a third (36 percent) intend to spend the bank holidays in their hometown. They will spend time with their families, friends and relatives.

The proportion of Russians planning to head for their “dacha” (country house) has gone down from 26 percent in 2012 to 17 percent this year; many do not want to go because the weather this year is too cold. Around 8 percent will have out-of-town picnics.

Only 7 percent of those polled said that they intend to take long holiday trips; just under half of them will visit destinations in Russia itself.

Those who intend to stay in Moscow will have plenty of opportunities to have fun.

Apart from the traditional holiday rallies organized by trade unions and political parties, the Russian capital will host more than 3,500 events dedicated to the opening of the park season, Spring Day, Labor Day and Victory Day.

The Russian bank holidays in May:

May 1 – The history of Workers’ Solidarity Day (also known around the world as May Day, or International Workers’ Day) dates back to July 1889, when a congress of the Second International urged “the entire international proletariat” to commemorate the struggle of American workers in Chicago who fought for better labor conditions.

May 9 – Victory Day marks the victory of the Soviet people over Nazi Germany in the Great Patriotic War of 1941-1945 (as World War II is called in Russia). Victory Day, which is also known as Russian Military Glory Day, is one of the most important holidays for Russians, along with birthdays and New Year’s Day.

According to Sergey Kapkov, head of the culture department in the Moscow municipal government, more than 150 open spaces, parks, boulevards and pedestrian zones will be open to the public this year.

“On May 1-5, Gorky Park will turn into one huge recreational area, where we will try to recreate the atmosphere of seaside towns from various periods – including a Soviet-era holiday home, and international resorts in Istanbul or other towns in the Mediterranean,” says Kapkov.

In addition, Gorky Park will host an artificial beach, with 1,500 tons of sand and 150 sun bathers.

Krasnaya Presnya park will offer a jazz festival,the Muzeon festival of street theatre and the Filiflower exhibition. “Ermitazh Garden will celebrate May 1 in Soviet style, with various period features and a concert of Soviet songs,” says Kapkov.

On Victory Day (May 9) there will be a procession on Tverskoy Boulevard to commemorate those who took part in the Great Patriotic War of 1941-1945(as World War II is known as in Russia).

Poklonnaya Mount will host an equestrian show at 6:00 p.m.; the Presidential Orchestra, the Kremlin Horse-riding School and the Presidential Cavalry Honor Escort will take part. Young artists will perform military songs at the same venue between 8:30 p.m. and 10:00 p.m.