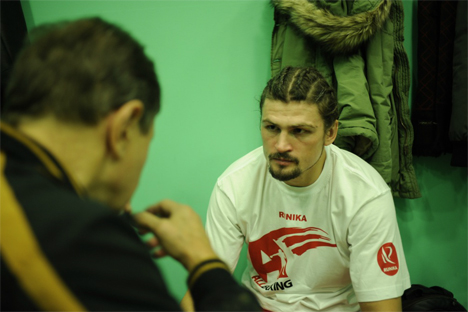 Sergius Akimov: “If you go into the ring full of emotions, anger, aggression, and human passions, you’re going to lose”. Source: Mikhail Mordasov

There is an unusual parish in the town of Nelidovo in Tver Region. The serving priests of the town’s only Orthodox Church are men of many talents: One is a boxer, another is a dentist, while another is a marathon runner. The church’s deacon is in a deathcore band.

The town of Nelidovo (approximately 186 miles west of Moscow) has a population of 20,000 but only one church. Despite this, only 10 people had attended the morning service on this particular Friday. The priests say that it is only quiet during weekdays; on Sundays and holidays the church is usually packed.

An attractive female churchwarden opened the church at around seven in the morning; by 8 a.m., a few parishioners and priests began passing through its doors. In the build-up to the service, only two priests were present. They were joined half an hour later by the Rev. Sergius Akimov – the boxing priest.

Akimov is a broad-shouldered man, although you can scarcely make out his powerful muscles under the priestly vestments. At first glance, you would not mistake him for a priest. Akimov is of a serious and rather solemn disposition.

He took up the cloth somewhat by chance. When he was a young boy, his belief was, as he puts it, naive and childish; he later became very superstitious. These superstitions became such a large part of his life that he decided it would be a lot easier if he no longer believed in anything.

Sometime later, he ended up having a long conversation about God with a priest who came to have tea with one of his friends. They talked into the early hours and Akimov was soon serving at the church – first as a reader, then a deacon and eventually as a priest.

Before Akimov embraced the Russian Orthodox Church, he had spent several years as an ultimate fighter.

When Akimov first came to the church, he seriously considered quitting the sport and focusing solely on his spiritual growth. The senior priest persuaded him not to give up the sport, although he did not give him his blessing to continue fighting.

“He said that it is not meant to be wholesome. He told me to train children instead. That’s the agreement we came to,” says Akimov.

For several years, the Rev. Akimov trained children in hand-to-hand combat and took them to competitions. The priest’s pupils were soon taking the tops spots, although the priest himself stayed out of the ring.

However, Akimov says this all changed back in 2007: “We went boxing in Tver [the center of Tver Region, about 99 miles northwest of Moscow]. I took part in a fight, without the blessing of the senior priest, and ended up winning. I was out of practice, although I had been doing regular sparring sessions.”

When asked how an aggressive sport such as boxing can have anything to do with Christianity, the priest’s eyes lit up and he delivered an inspired sermon on the positive benefits of boxing.

“Like many who know little about boxing, you don’t understand the essence of the sport; you think that it’s about getting in a scuffle and is therefore unchristian. But this isn’t true. If you go into the ring full of emotions, anger, aggression, and human passions, you’re going to lose,” says Akimov.

For him, boxing is not about broken teeth and noses or bloodied faces, nor is it about vanity or the money he receives for each round.

“For me, boxing is an art form; it’s the ability to think on your feet, string beautiful combos together, duck punches and maneuver around the ring. It is actually a game between two minds and two forces. If two men are of equal strength, the smarter and more able-minded of the two will win, rather than the more malevolent,” says the priest.

After the service, Akimov made ready to leave: He had exams to prepare for (for some time now priests have been required to take special courses), as well as boxing lessons at a local school. Before saying goodbye, he gave a conspiratorial wink and let slip: “Actually, all our priests are pretty interesting.”

It turns out that the Rev. Akimov is not the only priest there with hidden talents: One works as a dentist, another is a marathon runner, while the deacon sings and plays Orthodox deathcore music (“It’s called hardcore, I think,” says Akimov).

This quartet of “superheroes” is managed by the senior priest – a Moscow State Institute of International Relations graduate writing his Ph.D. thesis on the Third Reich.

The marathon runner, the Rev. Sergius Novikov, has taken part in a 24-hour ultra-marathon, as well as a 100K race. He demonstrated his athletic prowess by escaping before Gazeta.ru had a chance to talk to him.

The dentist and singer invited journalists to come and visit them – the former at his dental practice, the latter at one of his rehearsals.

The Rev. Sergius Malyshev – a tall, energetic man – seems to be in a constant rush, as though running late for something.

He is always smiling and joking, and he talks a mile a minute. Were it not for the cassock, he could easily be mistaken for a university lecturer. In the mornings, Malyshev serves at the church, while he works as a dentist in the evenings.

“I work here to make ends meet,” says the priest. “Although I doubt I could have quit dentistry altogether. I have been working since 1989 and, strange as it may seem, I enjoy it."

When Malyshev first came to the church, he was thinking about quitting dentistry but, just as with Akimov the boxer, he was persuaded not to by the senior priest. Although the clinic does not advertise the fact that one of their dentists is also a priest, Malyshev finds that the line between his two vocations can become blurred.

“People are generally very attentive when they’re sitting in the dentist's chair with their mouths wide open. They don’t tend to be as attentive during church sermons,” Malyshev says jokingly.

Deacon Alexander Kolosov is the youngest in the parish. In his spare time, he writes music and lyrics and also sings. Kolosov is how you would expect a priest to look, being quite stocky and sporting a ponytail and a beard.

Only the shaved temples hint at a slightly rebellious streak. Kolosov taught himself to play guitar as a teenager, and he then started a band with a group of like-minded people. The deacon’s deathcore growling is virtually incomprehensible.

Making his way down from the stage of a school auditorium where the group rehearses, Kolosov explains that their music is Orthodox. “One of our albums was about the fall of man and his firm resolve to be reborn as a pure being,” said the deacon, pausing for moment before adding, “with God's help, of course.”

While the deacon’s growling resounded in the school hall, on the floor below, budding boxers were getting ready for their lesson with Akimov.

The boxing lessons are free. Everyone has already assembled by the time the priest arrives.

As soon as he entered the gym, a group of boys ran up to him asking for his blessing. They then stood in a circle together, crossed themselves, bowed and began warming up.

The boxing priest Sergius Akimov: I believe everything is as it should be, and I can resist falling into pride. Source: Mikhail Mordasov

All the movements are clearly worked out, and the priest takes it all very seriously. As he hardly utters a word during the entire lesson, it seems that he is focusing more on others than himself.

It was clear that his pupils did not need any instructions from him either; they simply watch Akimov as he spars with a partner and repeat everything he does. Before getting up to spar with the priest, 23-year-old Yevgeny had a request for Akimov: “Just don’t hit me too hard, I’ve got my birthday party tomorrow.”

After a few years of training, the Rev. Akimov became a candidate for master of sports and then a master of sports. He still mainly trains alone (during and after his school lessons), and he hopes that he will soon reach peak condition and start notching up some victories.

The priest does not get upset about losing: “I know what truly matters in this life; I believe everything is as it should be, and I can resist falling into pride. I don’t set myself goals anymore, but believe, just as I did when I was a child, that everything that happens is the will of God.”