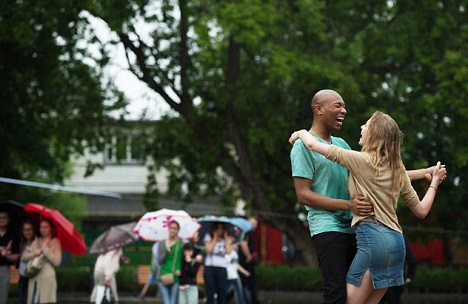 The Russian capital’s parks are gradually shedding their winter skin and morphing into spaces suitable for quality family time and entertainment, including some wonderful musical performances.

Festivals are one of the major draws of the re-imagined parks, and Moscow is quickly turning into one of the main European hubs for festivals. In the past, Russian music lovers typically planned to travel abroad every summer. However, many of the same headliners are now coming to Moscow. This situation was completely unthinkable just a couple of years ago when Afisha Picnic was the only open air event in Moscow worth attending.

Below are just some of the festivals we are excited about this summer:

As soon as Moscow finally wakes up from the seasonal slumber and shakes off the remaining patches of snow, Bosco Fresh Fest will open at Gorky Park. It's a part of a two month long Cherry Tree Forest Festival, which also includes theatre performances, film screenings, and book readings. Last year's preliminary festival proved to be a resounding success, both as a showcase for new and established Russian bands as well as some foreign artists.

This year's headliner is a French musician, Woodkid, who will perform together with Grammy winner Yury Bashmet's symphonic orchestra on May 20. Some of the hottest Russian exports, synth pop act Tesla Boy and Motorama, an indie rock band from Rostov-na-Donu, will lead the Russian program, which will also feature Nina Karlsson, Coockoo and Poco Cox.  The festival area will center around the Buran space shuttle, right on the embankment.

Hermitage Garden, a small green refuge in the middle of the city landlocked by concrete and brick, has always been a traditional venue for music festivals.

This year Ahmad Tea organizes its third festival here. Last year it featured Antony and the Johnsons and Klaxons. This year the lineup is no less impressive, with critical darlings Alt-J and dance veterans Hot Chip as headliners.

The organisers also promise great food from Gorky Park's favorite classics: Williamsburg, Ferma, and Wokker. Ahmad Tea Music Fest is also the only festival that will officially be serving alcoholic beverages, at the summer terrace of the 32.05 restaurant.

Plans for a major redesign of the All-Russia Exhibition Centre (also known by its old name VDNKh) are still at the discussion stage but this summer the first ever music festival will be organised on its premises. The concerts will take place on the main alley around the famous Friendship of Nations Fountain.

Park Live can definitely compete with Afisha Picnic for the title of the main Moscow summer festival. First of all the festival is not just one, but two days in length. Secondly, its line-up includes the two most popular Russian rock artists: Mumiy Troll and Zemfira. Also putting in an appearance will be international heavyweights such as The Killers, Justice, and Crystal Castles. Lastly, Park Live is the first Moscow festival to introduce a night program, which will take place on the Chemical Stage in Pavilion #20, usually used to exhibit Soviet achievements in the chemical industry. The night program's headliners are the famous Australians, Pendulum.

Subbotnik is another festival that may very well rival Afisha Picnic. It will take place in Gorky Park, but in this case it will be right next to the entrance, around the main fountain and devoted entirely to British bands. Arctic Monkeys is the obvious headliner but other bands from the line-up are perfectly capable of headlining festivals in their own right. Performances are being anticipated from Hurts, the math rock band Foals, rising soul and R&B star Jessie Ware and the up-and-coming post punk girl band Savages. The organizers promise great food, but alcohol consumption will not be on the cards.

Afisha Picnic is one of the oldest music festivals in Moscow, and will celebrate its tenth anniversary this year.  It switched several venues before finding a permanent home at Kolomenskoye, one of the larger and more historically significant parks. Once a royal estate, it remains complete with palaces and the 16th century Ascension church, which is on the UNESCO World Heritage list.

The festival is still almost three months away, so there is not yet an enormous quantity of available detail about the lineup or the general setup. The only confirmed bands so far are Blur, Bat for Lashes, CeeLo Green, La Roux and Russian rockers Splin.

Granted, Blur is the kind of name that can sell out festivals by itself. But with such serious competition this year, we hope Afisha has some surprises up its sleeves.