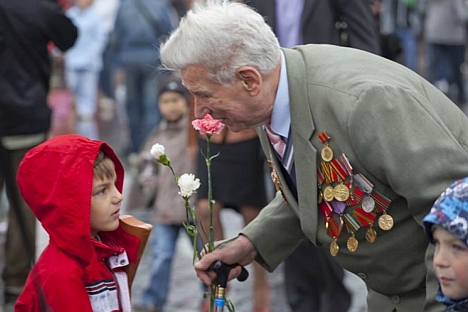 Back in the Soviet times, it was a problem to buy carnations - they were almost not to be found anywhere. Nowadays, flowers are sold everywhere, but we are lacking those who should receive them. Source: RIR / Ricardo Marquina Montanana

Nobody can give an exact figure of living soldiers of the Great Patriotic War. We may have only rough calculations.

The television screen is prompting every day: the Victory Parade due in ... days. The 68th anniversary of the Great Victory is coming up, the number of days prior to it is melting, likewise pass away the veterans. The age, the old wounds kill the heroes - not at the front, but here - of the burden of years and wounds. How many are they still in Russia? How many will celebrate the Victory Day this year?

Calculations differ. A year earlier, the ministry of healthcare and social development quoted 3.4 million veterans. This figure is very “comforting,” as it unites not only those who were at fronts, but those who enjoy similar rights - those, who worked in the rear, suffered the blockade, those, who were in the death camps, as well as those who fought in Korea, Afghanistan and in other countries.

Nobody can give an exact figure of living soldiers of the Great Patriotic War. We may have only rough calculations. When we celebrated the 65th anniversary of the Victory, the figure quoted was 488,000 combatants. That very source also claimed - every year the figure is going down by 15 percent or more every year. Some unofficial sources quote 90,000-140,000 as of now. Only one full stadium.

Combatants are going. During the parade a year earlier it was evident - Red Square’s tribunes were filled mostly with guests, not the veterans.

It has been more difficult to observe the tradition of presenting flowers to combatants on May 9 in Tverskaya Street, or by the Bolshoi Theatre. Back in the Soviet times, it was a problem to buy carnations - they were almost not to be found anywhere. Nowadays, flowers are sold everywhere, but we are lacking those who should receive them.

The Victory Day has always been the most popular holiday in Russia. It was not ordered from up there, it is a sacred holiday, which emerged from the colossal, inhuman effort of the entire nation, it is the top of the spiritual unanimity. This is why it replicates in new generations. The simple sign on a car “Thank you, Granny, for the Victory!” (which is very popular in Russia nowadays) means the simple pride for the country, for the grandfathers and great grandfathers. This is the pride to be shared with own children and grandchildren.

Bitter, as it may be, we cannot prolong lives of those, who fought for honour and independence of our Fatherland. However, we do keep the Memory about them and about their heroism in 1941-45.

We, the present generation, are seeing off the generation of combatants. This honour is full of sorrow, though it is a high moral obligation: what they were like, those winners, what they said, how they joked, what worried them, what made them happy, what disappointed them - these answers would be in our stories.

Remember those who are gone. Remember those who are still with us. We are to pass on this Memory. At the 100th anniversary of the Victory, at another parade in honour of the liberators, their image would be forever in Red Square; like it would be at a small village graveyard by the monument with a red star and simple words: “They Fought for Fatherland!”

They are leaving - Memory remains.