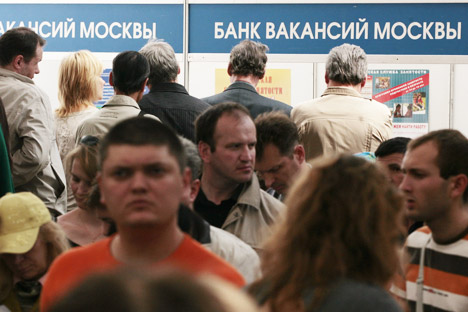 The maximum unemployment benefit makes up 4,900 roubles (around 160 dollars) which compares to the wage level in many sectors. Source: ITAR-TASS

A social disease which has already gripped several western countries is now spreading in Russia, as authorities have expressed alarm over an increasing number of Russians preferring to live on social benefits rather than working.

Despite the fact that the number of available vacancies in the country exceeds the number of the unemployed by 1.5 times, many young people in Russia prefer taking benefits rather than working. Notably the trend is mostly seen in depressed regions where it is possible to subsist on unemployment benefits.

This year, Russian colleges introduced a new entry in employment statistics reports: "reluctant to work." Many graduates, after receiving the certificate of higher education, do not even try landing a job, but immediately "settle" at home, choosing the life of the unemployed and making no attempts to find out if the labour market needs them.

An older generation is not keen to work either. Saratov region resident Svetlana Savelyeva, 29, told the Novye Izvestia that she'd received unemployment benefits for almost six months already: "it's very difficult to land a high-paid job: you need good connections and acquaintances. I'm not taking up a job for 7,000 to 8,000 roubles (around $230-$270)/per month/. It's much more advantageous to draw a benefit while staying home."

The maximum unemployment benefit makes up 4,900 roubles (around 160 dollars) which compares to the wage level in many sectors.

"Sadly, it is a kind of a line of business for regions with a low average salary: people tend to prefer unemployment benefits for being unoccupied to working for slightly higher remuneration," Rossiyskaya Gazeta quoted partner of the Tax Inspector company Dmitry Lipatov as saying.

"However, they are yet to prove that they cannot find a job; i.e. they need to produce a document showing that the applicant has been rejected by several employers. Thousands of unemployed successfully complete this procedure," he noted.

"Due to the existing system, the main recipients of unemployment benefits are residents of subsidized regions, where it is possible to subsist on this paltry sum. Moscow posts a record low unemployment rate year in and year out, which is below 1 percent. It happens not because it is easy for people to get employed, but because it is impossible to survive even if one draws the maximum unemployment package," assistant professor at the department of labour and welfare law of the Kutafin Moscow State Law Academy Nikita Lyutov said.

Official unemployment in Russia goes up by over 1% in November

Russia's unemployment lowest over past 12 years

Russia has lost the culture of labour, member of the Kirov regions' Public Chamber Nikolai Pikhtin said. After many defence companies were shut down in the province, a large mass of employees, including highly-skilled ones, found themselves jobless: "people have not adapted to the new conditions; most of them have never accepted the new reality. Some have taken to drinking, some have registered as unemployed and others live by casual jobs."

Experts noted the spreading of the so-called Italian syndrome in Russia, where able-bodied citizens aged 30 to 40 do not wish to work in principle preferring to spend time on entertainment. In the opinion of political analyst Ruslan Gereyev, "the Russian state provokes this parasitism," because instead of encouraging young people to work, we engage in labour force imports, stimulating the hiring of migrants from Central Asia to do low-skill jobs.

"There are loads of jobs at present. There's money, too. But people, especially youngsters, do not wish to work at all. I see it all the time during meetings with students. I tell them that I'm ready to pay; but hardly anybody listens; a majority immediately turn their backs on me," the Novy Izvestia cited entrepreneur Dmitry Yezhov as saying.

This situation is seen in all the sectors: "when I meet with business persons and industrialists, they keep complaining: we can pay money - good money - but there is nobody to work. People want to stay at home."

Meanwhile, the authorities plan to take measures to combat this social dependence. The Ministry of Labour and Social Protection intends to restrict the opportunities for the jobless Russians to constantly register with employment services in order to draw benefits.

Deputy Minister of Labour and Social Protection Tatyana Blinova said at a session of the Committee on Welfare Polices under the Federation Council (upper house of the Russian parliament) that her department was planning to draw a bill to revise the mechanism to pay unemployment benefits.

She reminded that the amount of the minimal and maximum unemployment package was annually fixed by the Russian government in 2013, it was 850 and 4,900 roubles, respectively. "Regrettably, they are quite low amounts; in addition, we have an unjustifiably lengthy period when people are eligible to receive unemployment benefits, and the law places no restrictions on repeating the procedure over and over again in which they re-register, solely with the view of receiving benefits," she noted.

To support the new amendments, Tatyana Blinova stated that the number of vacancies in Russia exceeded the number of the unemployed by 1.5 times at present.

Earlier, Labour Minister Maxim Topolin spoke about the necessity to regulate the payment of unemployment benefits. The measure will apply not only to those wishing to "earn on benefits" but also to the introduction of a fair principle of payment, depending on length of service, skill and forfeited salary.

According to the Labour Ministry, almost two-thirds of Russians registered at employment centres, manage to find new jobs, and this indicator keeps growing.