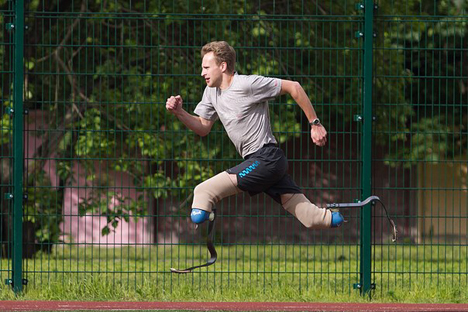 Sergey is now a famous photographer who earns his livelihood through his profession. Source: Personal archive

A photographer from St. Petersburg who had both legs amputated after a mountaineering accident, has won a bronze medal in the Russian paralympic skiing championships, thanks to his carbon prostheses and an iron will.

Sergey Aleksandrov, aged 31, is a professional photographer and an amateur mountaineer. In 2009, he set out with friends to conquer Mount Elbrus in the Northern Caucasus. The climb was not particularly dangerous but in a careless moment, he slipped and fell into a crevasse, a distance of almost 2 kilometers.

When he landed he suffered an open triple fracture in both legs. There he waited for 32 hours and later lost both legs in tibial amputation.

Yet it is hard to use the word disabled to describe this athletic and charismatic young man, with his assured gait and firm handshake. He is tall and blond with pale eyes and a wide smile.

He enters a room as if surrounded by a halo of light, in the same way as many of the people he has photographed. He is still smiling when he explains what happened to him.

"I knew that, with an open fracture, a person should be able to survive for one-and-a-half to two hours, but after that there is no guarantee that he will make it. I was able to hold on for 32 hours with a triple fracture in both legs. So when I was told about the amputation, I took it fairly calmly. For me, the experience was a gift – because I was still alive!"

After leaving the hospital, he got his second wind. It made him aware that he had an extraordinary strength, able to generate hope and transmit a positive message. "I remembered all those people who looked so depressed whom I saw from my hospital room, entering with bowed heads and leaving radiantly, laughing because in fact everything was fine. This inner certainty never left me."

From then on, everything happened as if in a dream, to a large extent due to the people he met whom he compares to guardian angels. "I didn’t even have time to explain what I needed. Everything happened so quickly."

A stranger came to meet him for the first time in the hospital, and on the return visit brought him the whole amount he needed to buy carbon fiber prosthetic legs (about 5,000 euros or $6,579 for each leg) which enabled him to walk again.

The director of the St. Petersburg Sports Federation for the Disabled, who took Sergey under his wing, motivated him and financed his ski training and equipment (skiing is a very expensive sport) thanks to whom he came third in the Paralympic Mountain Skiing Championships in March 2013.

In the absence of a genuine effort by the authorities to offer systematic support to the disabled, it is on the human level that aid must be experienced.

"The city is totally unsuitable for the disabled. When I was still using a wheelchair, I was not allowed access to the metro. But, on the other hand, people are brilliant. On several occasions, unknown hands lifted me up in the wheelchair and brought me up or down the stairs."

At first, rehabilitation was a very painful experience. "I would sweat profusely just trying to move from the bed to the kitchen. The pain was excruciating but my feeling of happiness was stronger. I’m still alive!"

His prosthetics fitter, would constantly tell him: "Bear as much as you can." Sergey had no choice and that led him to do even better. After only two weeks, he decided to go back to work and left home to photograph a wedding.

He became so involved that he forgot his crutches. Only one month later, he was training for a running race. Then, with help from the Sports Federation for the Disabled, he took up skiing. By the time a year had passed, thanks to dedicated training, he had become number six in the whole of Russia.

"It is only by working at a frantic pace that you will get results," affirms the champion. Today, he has returned from the Russian Paralympic Combined Mountain Event with a bronze medal. This made him one of the first skiers to test the pistes for the 2014 Winter Olympics to be held in Sochi.

"It is a grandiose project and the infrastructure is impressive. A lot of the building work is still in progress. I hope it will all be finished in time." Even if he hasn’t been officially selected for the Olympics, Sergey is hoping to be selected for the additional quotas ("the wild tickets" as he calls them) so he can try his luck at the 2014 Winter Paralympics.

Sergey is now a famous photographer who earns his livelihood through his profession. He is married and has a little eight-month-old girl. Since his fall, and despite his disability, he has managed to climb mountains in Norway and volcanoes in Kamchatka, where he walked for ten hours wearing a knapsack and covering a distance of more than 30 kilometers.

He has visited other places in Europe and won numerous athletic and mountain skiing competitions. Why does he want to be the winner? "To be able to share it," explains Aleksandrof radiantly.

He is currently learning to become a trainer so as to be able to transmit his conviction that "you can live a normal life with any kind of disability and, what’s more, you can live happily!"