Hardships of growing up in the USSR 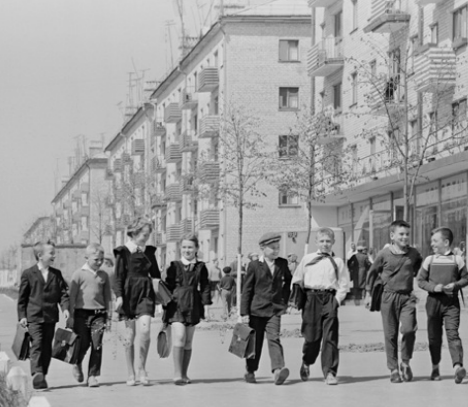 The great socialistic idea of "every family having an apartment by 2000" came to life in thousands of poorly designed lookalike buildings in all Soviet cities. Source: ITAR-TASS

Bangalore-based Elena Revinskaya reflects on the difficulties she faced in Soviet Siberia just before the fall of the communist regime.

I was born in the Soviet Union in the 1970s and grew up in Russia but have been living abroad for the last ten years. Last New Year, I left the warmth of Bangalore to visit my mother who stays in Novosibirsk, in the heart of Siberia.  On this brief holiday I went alone, leaving my husband and son behind. I stayed with my mom in the same apartment as 30 years back, among the same old school cupboards, dancing ballerinas’ paintings and old carpets put from the walls to the floor. It was a trip down memory lane.

I spent my childhood in a two-bed room apartment in the building that looked exactly like thousands of other buildings in the country. Communistic doctrine called for everybody to be equal. The great socialistic idea of "every family having an apartment by 2000" came to life in thousands of poorly designed lookalike buildings in all Soviet cities.

15 years of my life were lived under the Soviet regime. My childhood was happy but tough. I had to go through many things that modern kids wouldn’t even think about. The end of the Communist period was characterised by empty shelves in the grocery shops, enormous lines to buy bare necessities, growing unhappiness of people and slow deterioration of the social ideas.

Some Indian readers may be surprised but when I think about that time I think about crowded lines of tens, hundreds of people standing one after another. Today when I wake up my son, he has the luxury to be lazy, to sit and watch cartoons or just do nothing. I have never had all that. I had to wake up early in the morning and rush to the grocery shop to buy food. My parents were working and didn’t have enough time. It was not easy to buy food. First of all, there were only few items available in the shops: bread, sugar, salt, oil, etc. In order to buy fresh meat, you would have to get up early morning and stand in a very long line for several hours. The culmination of food deficit was when the "ration" system came into use. Every person was allocated a limited number of food items per month. You could not exceed it. If food was so difficult to get, forget about household items. You would never imagine how tough it was to buy a sofa, a simply designed primitive sofa! You would have to go to a furniture shop and get into a 100-name list of people who wanted to buy the same sofa. You would have money but you couldn’t get what you wanted. Every day it was necessary to go to the shop to meet a person responsible for maintaining the records and sign that you still want that sofa. If you missed one day, you would have been crossed out from the list and would have had to start everything from the beginning. Eventually, we got that sofa which is still in my house today.

HOT TOPIC: FALL OF THE USSR

The deficit of that still affects people today. My mother is so used to keeping things, fixing old items, looking for something cheap that even today she is unable to throw things away. She has a Soviet “what if I need it in the future” mentality.  In my house you will find stocks and stocks of items that she is not able to say good bye to.

When the market economy opened its doors, numerous imported items flooded into stores across Russia. People had not seen beautiful products for many years. Russians couldn’t satisfy desires to own branded items. People are ready to spend a huge percentage of their income for good clothes.

We worked a lot as kids. The concept of "dacha" or garden outside the city is familiar to every Russian. We had to grow our own vegetables to provide the food on the table. There were no markets, no private companies, and no babushkas selling vegetables. It was not allowed to sell your own produce, only state run shops were selling food. Every weekend we had to go outside the city to our land to do gardening. We didn’t have gardeners or servants to help us - only us, our efforts and dedication. Imagine a 12 year-old girl.  Every Saturday I was taking a bus, then train, then walking for 30 minutes just to reach the place. From morning to evening I was plucking, weeding, digging, watering, taking care of carrots, tomatoes, potatoes, berries and cucumbers. And then, the same long way home with heavy backpack and two 6 kg buckets in each hand. If I survived that, I can survive anything.

We now criticise that regime. I am myself a very strong supporter of market economy. But I believe that the hard life during those days made me the way I am today – a tough survivor, who respects people for their qualities and not for their social status.  I value the small things in life and am able to adjust to any difficult situation. I never regret that I was born and grew up in a socialistic country. I have seen how difficult life can be. Today I appreciate what a modern luxurious life gives to me and I never forget who I am.