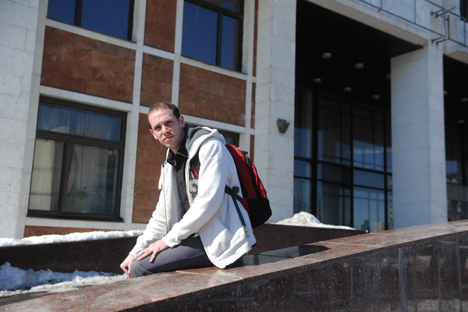 Bryce Carr: 'The world has many stereotypes about Russians". Source: RIA Novosti

American student Bryce Carr, who studies at the Academy of National Economy in Moscow, talks about Russia’s education system and his impressions of Red Square.

I first started learning Russian when I was still in the United States. It all came about because I once read Dostoyevsky’s Crime and Punishment in English and was blown away by it. My friends and family were puzzled of course; my parents grew up during the Cold War.

But now they’re OK with it. Plus, my brother studied in Tomsk for three months. Speaking Russian has become one of our hobbies. But in general, studying Russian is very hard: It’s really difficult for English speakers to pronounce sounds like ы, or the soft л and р.

And it’s practically impossible to tell the difference between the letters ш and щ.

I earned a double major in economics and Russian from Brigham Young University in Utah. Then I learned about a post-graduate management program at Russia’s Academy of National Economy. It turned out to be very expensive, but I was lucky to win a grant. And here I am, living in Russia for a year and a half already.

How to say “I’m sorry” in Russian

I remember my first day in Moscow; I went to Red Square of course. Frankly, I wasn’t expecting to see anything special. But when I got there I was stunned. It was so cool – to feel the history of the place, the importance of what had gone on there. And I was also surprised by how modern and European Moscow was.

Then classes started. The Russian and American education systems are very different. Here our studies are built around what students want: Professors asked us right away about what we wanted and what we expected from each given course.

But we weren’t able to choose a curriculum. In America, for instance, before the beginning of each course we were given a study plan, a schedule. So we knew what to expect. In Russia, it’s always a mystery.

In America, I never saw fewer than 20 students at a lecture or seminar. In Russia, maybe five people attend some classes.

Students in Russia and the States are different too: Unfortunately, in Russia students can start talking to each other right in the middle of a lecture, when the professor is still speaking.

For instance, professors from Harvard and Stanford have recently visited here, and some students answered their phones right in the middle of a lecture. The American professors were so shocked – they didn’t know how to react.

In general, the Master’s program has been interesting, although there were some courses that I didn’t like at all. For example, Russian Spirituality: I can’t even explain what exactly it was, because I didn’t turn up very often.

In class, we were told why there were so many churches in Moscow, why the majority of Russians were Orthodox Christians, and how this affected their mentality. I thought this had nothing to do with my field, which is management.

I live in a residence hall in the Yugo-Zapadnaya (South-West) area; it’s quite new and not bad at all. The biggest difference between Russian and American campuses is that students smoke everywhere here. In America, smoking is allowed only in specially designated rooms.

I hate the security guards at our hall. They are very rude, especially with foreigners that don’t speak Russian. And since I understand Russian, they take it all out on me and complain all the time.

I’ve been living in the hall for a year and a half and the guards know me well, but if I happen to leave my pass in my room, they won’t let me in. I begin to argue with them: “How can I prove to you that I live here? My pass is in my room, but you’re not letting me in to get it.”

But nothing helps, and I have to talk to the administrators every time.

That’s the bureaucracy that I hate in Russia. Of course, we have red tape in America too, only it’s different. For example, here I tried to get a student metro pass. But nothing good came out of it.

I had to go pick up the form first, then file it at the university and wait several weeks, then go to the metro again. I went through the process several times, but they still wouldn’t give me the pass.

When I came to the metro again, they suddenly requested that I submit a notarized translation of my passport, because they couldn’t read English.

So I lost my patience: I started shouting and called every kind of authority to whom I might be able to complain. Nothing helped. I decided to just forget about the pass. I fought for three months, but the bureaucracy is invincible.

I was in Moscow during the opposition rallies. It’s hard for me to talk about them. I attended one of the first rallies at the Bolotnaya Square out of curiosity. Then my friends asked me not to go to protest rallies any more.

They didn’t want people to think that if an American attended a rally, it meant that the United States was sponsoring the opposition.

The world has many stereotypes about Russians – they are cold and never smile. In general, that’s true. But it’s because Russians are more sincere in expressing their emotions.

Now that I know Russians up close, I can say that they smile when they are genuinely happy. In America, a smile and a "How are you?" are just niceties, a matter of courtesy.

Once I ran into a cleaner at a Russian residence hall and I asked: “How are you?” I didn’t even care how she was. And suddenly she started telling me her entire life story.

I think Moscow is an excellent city, if you can leave it at least once every three months. I hate the weather here: it’s always dark, bleak and wet. I don’t like McDonald’s and I don’t go there in Moscow either.

But I know where they serve real American burgers in Moscow. And I like that whenever I’m nostalgic for America, I can buy a jar of peanut butter.