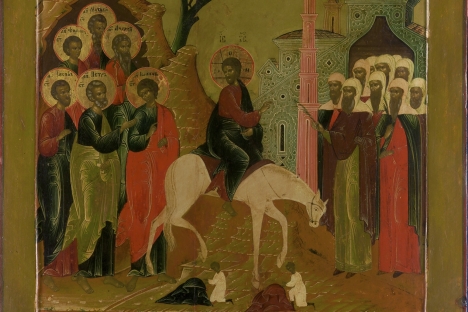 An exhibition of icons from one of Russia’s most famous museums opened in the Netherlands city of Utrecht as part of the Russia-Netherlands year.

The Museum Catharijneconvent in Utrecht, 40 km from Amsterdam is hosting an exhibition entitled “Divine Inspiration” in cooperation with the Andrey Rublev Museum in Moscow. The Rublev museum, named for one of Russia’s most famous icon painters, is home to one of the world’s greatest collections of Russian Orthodox icons.

The exhibition aims to show the differences between Western religious art traditions and Eastern ones. The 30 Russian icons from Rublev Museum are supplemented by icons from the Museum Catharijneconvent’s own collection as well as private collections. The icons date from the 15th to the early 20th century.

There are several major icon images. One of the most famous is the icon of Christ “not made by human hands.”

“It was made by an unknown artist from the small city of Veliky Ustyug, 900 km far to the north of Moscow. Although this icon was created according to the very strict rules, it is very original, touching, gripping and it illustrates a way of painting in the north of Russia,” he added.

Other icons in the exhibit show the influence of Western artistic trends. In 1547, Moscow burned to the ground and Tsar Ivan IV (the Terrible) invited foreign architects to come and help rebuild the city.

They brought with them new techniques and concepts of beauty. As a result, Russian artists began to play with light and shadow, perspective and ways of painting human bodies.

“You can see the icons with fancy architecture and landscapes in the background, clearly inspired by Dutch and Flemish etches and engravings,” said Désirée Krikhaar, the curator of the exhibition.

“Even the round world instead of a flat horizon came from western examples. Representative choice of icons shows the development of icon painting in Russia and the influences from the western countries on Russian art,” Krikhaar added.

According to the Museum’s statistics as well as anecdotal evidence, the exhibit has been very popular with visitors.

“We were here for the exhibition’s opening ceremony and now we came back to see it again,” said Carolina and Eric, who live in Utrecht.

Added Rebecca from the UK, “I came to the Netherlands for my holidays. I am very interested in religious and I like visiting exhibitions, so my friends recommended that I see “Divine Inspiration.”

The exhibit continues through Aug. 4.