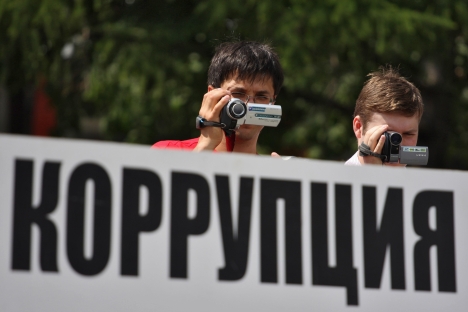 The Russian anti-corruption legislature may be very difficult to apply because its measures are controlled by officials. Source: Kommersant

Though Russia meets the anti-corruption standards of UNCAC, a major problem is the lack of a law punishing illicit enrichment itself.

Experts at the Center for Anti-corruption Research and Initiative Transparency International-Russia say Russian legislation easily meets the requirements of the United Nations Convention against Corruption (UNCAC). And yet, the application of these laws is fraught with difficulties, not least because all the anti-corruption measures are in fact controlled by executive authorities.

One shortcoming for which experts criticize Russia is its failure to ratify Article 20 of the UN convention, which criminalizes illicit enrichment. The Russian Criminal Code doles out punishment for giving and taking bribes, misappropriating funds, embezzling property and bribing a foreign official, among other things. However, Russian criminal law does not establish punishment for illicit enrichment itself.

Moreover, there is a whole list of officials in Russia – from the President down to ordinary investigators – who are entitled to special procedures in terms of holding them criminally responsible, even when they are suspected of corruption.

In addition, the Russian Criminal Code envisages criminal responsibility for individuals, not legal entities. Therefore, it often happens in Russia that the media report facts which can be interpreted as corruption, but which cannot be investigated in reality. For example, the report refers to the family affair of the first deputy Prime Minister Igor Shuvalov.

In 2004, the Bahaman company Sevenkey Ltd, which listed Shuvalov’s wife Olga as the beneficiary, entered into two stock market trades. Specifically, it invested around $18 million in the Russian natural gas monopoly Gazprom. This transaction, facilitated by billionaire Suleyman Kerimov, was designed to turn $100 million in profits for Sevenkey by 2008, as during this period, Gazprom share prices surged more than sevenfold.

“The provenance of Sevenkey's initial funds is somewhat murkier,” the report notes.

Another shortcoming reported by Transparency International-Russia is the existing mechanism of control over compliance with anti-corruption measures. At the federal level, the main anti-corruption body is the Investigation Committee. Cases of bribing foreign officials involved in international commercial deals are controlled by the head of the Presidential Administration. At the regional level, the fight against corruption is overseen by the gubernatorial structures.

“We can describe this type as executive supervision,” the experts concluded. At the same time, parliamentary control and supervision are in fact lacking.

Transparency International-Russia has sent its report to government bodies, including the federal government, to comment on the analysis provided.