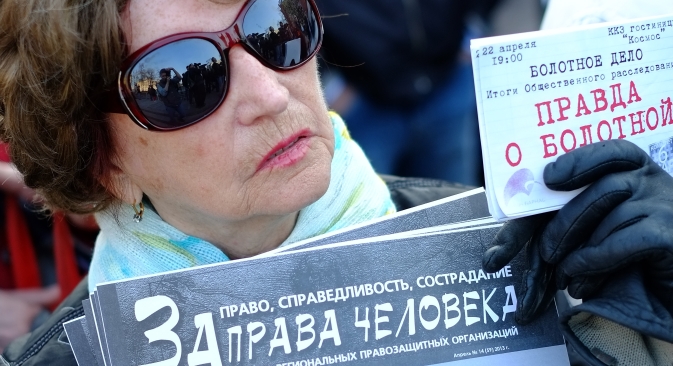 A woman attends the rally in support of opposition leader Alexei Navalny, who is accused over the Kirovles embezzlement case. The poster reads "For Human Rights" Source: RIA Novosti / Andrey Stenin

Amnesty International presents its annual report in Moscow, pointing out that the situation in Russia has deteriorated since the beginning of the year.

Amnesty International’s annual report draws attention to the laws passed earlier this year in Russia, which restrict people’s freedom of speech, assembly and association. The organization is itself a potential victim of Russia’s new law on nongovernmental organizations.

Amnesty International presented its annual Human Rights Report on May 22. The lengthy document describes the situation in 159 countries and covers the period from 2012 to early 2013. As a general comment on the state of affairs around the world, the report notes that “global inaction on human rights is making the world an increasingly dangerous place for refugees and migrants.”

It has become easier to transport weapons across borders than it is for refugees to cross them.

The report states that “the UN Security Council must consistently stand up to abuses that destroy lives and force people to flee their homes. Respect for state sovereignty cannot be used as an excuse for inaction.”

The presentation in Moscow was led by Amnesty International Russia Director Sergei Nikitin and his Dutch counterpart Eduard Nazarski. According to the latter, “thousands of people are detained every year, not because they have broken the law or committed a crime, but in order to remove them from the country or prevent them from gaining residency. Alternatives exist, but detention is widespread nonetheless.”

Human rights facts around the world

Torture is practiced in 112 countries

There are 15 million registered refugees around the world

There are 12 million stateless persons around the world

Nazarski pointed to the suicide of Russian opposition activist Alexander Dolmatov at a deportation center in the Netherlands in the middle of January. Dolmatov had requested political asylum after taking part in the May 6 rally in Moscow. Amnesty International has called for an independent investigation into the matter and questions “the current immigration policy of the EU,” stressing that “everybody has the right to be treated with dignity.”

When asked if he believes the human rights situation in Europe has deteriorated because of the crisis, Nazarski commented that the situation has been negatively affected by the economic crisis, as well as the war on terror and immigration pressure.

“A number of factors have contributed to the situation we now find ourselves in. On the global level, in that precarious balance between the market and human rights, it seems we are tending toward the former. And, in my opinion, the rise of China has a lot to do with it,” said the Dutch Amnesty International official.

The human rights situation in Russia

Amnesty International Russia Director Sergei Nikitin spoke about the “deterioration of the human rights situation in Russia over the past year.” According to him, “a number of laws have been passed that restrict freedom of speech, assembly and association.” He condemned the imprisonment of Pussy Riot members, as well as the discrimination against the country’s LGBT community.

Another issue raised by the Amnesty International report was the new law on NGOs, which requires such organizations to register as “foreign agents” if they are financed from outside Russia. Nazarski mentioned that Amnesty International had signed a manifesto of solidarity with other organizations, and “they would continue to strive for the development of civil society in Russia.”

Nikitin said that officials from the general prosecutor’s office had searched Amnesty International’s headquarters in Moscow in late February, seizing a number of documents during the surprise, five-hour inspection that was recorded by the NTV television channel.

“It’s a national campaign to tighten the noose on NGOs,” Nikitin said.

Natalia Taubina, director of the Public Verdict NGO, which provides legal aid to citizens in disputes with the authorities, was also on hand at the news conference, unequivocally saying: “We’re not trying to overthrow the government; we’re simply trying to defend human rights. Human rights are universal and it would not be correct to say that it’s an internal matter only.”

Taubina went on to explain the difficulties and uncertainty that a number of organizations are now facing in Russia: “Calling yourself a ‘foreign agent’ is like saying you’re a spy; but we work in Russia, for the good of Russian society. The new law not only marginalizes us, but is also a flat out lie.”

She also talked about the difficulties involved with securing private financing in Russia. “It’ll be virtually impossible to attract any kind of funding, because we are an independent organization; and while the money might be there in theory, things like the Khodorkovsky case are not exactly encouraging,” said Taubina.

At the same time, Taubina mentioned that they were waiting for a verdict from the European Court of Human Rights in Strasbourg, after 11 NGOs filed a complaint in February. She explained, however, that Russia “does not pay any attention to such verdicts, which makes this a lost cause.”

On the other hand, according to the Amnesty International report, the need for a judicial reform in Russia was widely recognized, including by high-ranking public officials. “In the course of the year, no effective measures have been taken to ensure the independence of the judiciary, and there have been numerous reports of unfair court hearings,” the report notes.

Sergei Nikitin mentioned “an important step that was made during the year.” The Arms Trade Treaty adopted by the U.N. in April (a 154-to-3 vote) may curb the sale of weapons that could be used to commit atrocities. This goes to show that the joint work of NGOs, international organizations and governments around the world can bear fruit. “It’s a slow but necessary process,” said Nikitin.