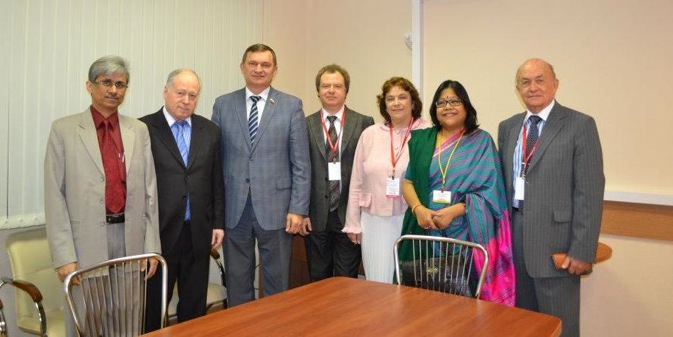 Many high-profile Russian participants and Indian experts on Ayurveda were present at the Congress. Source: Embassy of India in Moscow

Last month the First All-Russian Congress of Ayurveda was held in Moscow with the support of Indian Embassy. The key topics of discussion were including Ayurveda in the medical syllabus at Russian universities and implementing Ayurvedic medicines in Russian healthcare.

In an attempt to popularize the Ayurvedic therapy and medicines in Russia, the Russian Ayurveda experts with the support of Indian Embassy held the First All-Russian Congress of Ayurveda last month in Moscow, at one of the country’s prominent medical universities, the First Moscow State Sechenov Medical University. The head of the Non-Drug Therapies and Clinical Physiology, Prof. Vadim Zilov conducted the opening ceremony of the two-day Congress on April 12-13, which was attended, among others, by Ms Madhumita Hazarika Bhagat, Director of the Jawaharlal Nehru Cultural Centre (JNCC), under Indian Embassy on behalf of the Indian ambassador Ajai Malhotra.

In his message to the Congress, which was read out by Ms Bhagat, the Indian ambassador expressed great satisfaction over the fact that Ayurveda was becoming increasingly popular with each passing year, in Russia.

He said that if the Ayurveda has taken firm roots in Russia, the credit for this goes not only to the Indian Ayurveda specialists and practitioners in Russia for many years but also to the Russian experts and the Russian people. He also expressed confidence that the First All-Russia Congress of Ayurveda, as a joint effort by the Russian and Indian Ayurveda experts, will be a “catalyst for the wider acceptance and further popularization of Ayurveda in Russia.”

The main highlights of the discussion at the Congress included possibilities of using Ayurvedic medicines in healthcare and medical practice and Ayurvedic education in Russia.

Ayurveda experts also spoke on such important subjects as the experiences of the use of Ayurvedic system in treatment of children with cerebral paralysis, bronchial asthma and gastroenterological disorders, unique features of Ayurveda dietetics and modern medicine and Ayurveda.

In the past 15 years, Russia has made vigorous efforts to go in for Ayurveda in the country. With India’s support and assistance, Russia set up Russian-Indian Centre on Ayurvedic Research in Moscow in October 2004. According to the media reports, Genotype-phenotype studies on Prakriti and comparison of Indian and Russian population are being presently pursued at the Centre. A permanent exhibition is also to be set up in the Russian capital for promotion and sale of Ayurvedic medicines. Indian Ayurvedic specialists have also shown keen interests in growing some medicinal herbs in Russia that cannot be cultivated in the hot climate of India.

India and Russia have already signed a memorandum of understanding (MoU) on the cooperation in the field of Ayurveda teaching, treatment and research.

Denis Kuzmin, the Executive Director of the Russian-Indian Ayurvedic Association, said it was the first step towards legalization in Russia of traditional Indian medicines and the most ancient Indian science.

A complete first for the Indian Aayurvedic experts was that they treated a group of Russian children affected by the tragic accident at the nuclear power plant in Chernobyl (former Soviet Republic of Ukraine) in 1989. In the late 1990s, experts of Ayurveda Medical Centre, Kottayam (Kerala) together with Russian colleagues treated for two years more than 100 children with asthma, cerebral palsy, gastroesophageal-intestinal diseases by methods of Ayurveda at the clinic of the Moscow Institute of Pediatrics and Pediatric Surgery, Russian Health Ministry. But this treatment was carried out by Indian Ayurvedic specialists.

“This practice was not continued. In Russia, there are no graduate specialists of Ayurveda. Meanwhile, Ayurveda in Russia is developing at an amateur level,” Kuzmin noted.

“I am very impressed by the interest shown by Russian doctors in Ayurveda,” Narayan said. “We are willing to generously share our experiences with Russian doctors in the training, research and production houses of Ayurvedic centres in India, and also to send our experts to Russia.”

Russian medics from the Russian-Indian Ayurvedic Association expressed confidence that the inclusion of Ayurveda  in the syllabus of Russian medical universities this year will give a fresh boost to the promotion of Ayurveda in Russia and they are enthusiastically working in this direction.

Dadan Upadhyay is an Indian journalist based in Moscow