Authorities to punish sacrilegious acts with a jail sentence 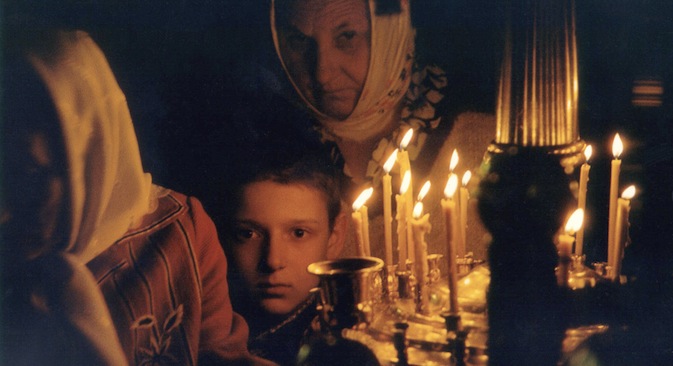 A bill introducing sentences of up to three years in prison for acts that insult religious feelings makes headway in the Russian parliament.

Five weeks after three Pussy Riot members were sentenced to two years each on hooliganism charges for singing their “Holy Virgin, chase Putin away” song at Moscow’s Christ the Savior Cathedral, the four State Duma parties introduced a bill “to counter insults of religious convictions and feelings.”

On Tuesday, May 21, the bill was passed in the key second reading by three-fourths of the lower house of parliament.

In response to criticisms, lawmakers reduced the proposed maximum sentence for “public acts expressing clear contempt for society” performed, for instance, in a church or a mosque “with the purpose of insulting religious feelings of religious people” from five to three years. The bill also proposes fines of up to 500,000 rubles ($16,000) and community service.

“The public is very negative about defamation of holy sites, and there is a demand for safeguarding the feelings of religious people. For example, the Pussy Riot ‘demarche’ has been condemned by the vast majority of Russians, regardless of their religious views,” Duma deputy Tamerlan Aguzarov was quoted by the United Russia Party’s press service as saying.

A total of 45 percent of Russians would like to see sacrilegious acts prosecuted criminally, a survey conducted last September by a major Russian pollster, Public Opinion Foundation, showed. Twenty-two percent of respondents disagreed, and a third said they had no particular opinion on the issue.

Andrei Kuraev, a professor at the Moscow Orthodox Academy, believes that a modern society needs law to protect it from hate crimes. At the same time, he refers to the current bill’s wording as vague and calls for removing the notion of “feelings” from it.

“The bill opens an opportunity for swamping courts with complaints,” Kuraev told Orthodoxy and the World magazine.

“So I come to a judge or a prosecutor saying my feelings have been hurt. Who can verify that except me? A judge is offered to delve deep into two souls: He or she is to determine whether there is indignant offense in the complainant’s heart and if there was a secret criminal intent in the defendant’s innermost thoughts,” he explains.

Mikhail Fedotov, head of the Presidential Council on Human Rights that gave a critical review of the bill’s earlier version in January, now describes the legislation as “quite neatly phrased” and “close to perfect.”

“People’s religious feelings, just like any other feelings – such as dignity, for example –undoubtedly should be protected,” Fedotov told Ekho Moskvy radio on May 22.

Fedotov pointed out that the new norm “allows penalizing for violating the freedom of conscience,” while Pussy Riot members were convicted “on charges missing from the Criminal Code as such.”

“When there’s no such article in the Criminal Code, there is nothing to punish for,” Fedotov said.

Deputy head of the Duma’s Committee for Public and Religious Organizations, Mikhail Markelov, points out that the current bill is not about insulting religious feelings.

“It’s too subjective a notion, and it’d be very difficult to define the elements of such a crime,” Markelov was quoted by the United Russia press service as saying. “What we’re proposing is criminal prosecution of certain public acts.”

Members of the Yabloko democratic party – some of whom picketed the Duma on May 22 – are certain that the new law will impinge on atheists’ rights.

“Using the Criminal Code to protect the feelings of one social group – religious people – the government violates the Constitution that guarantees equality for all citizens,” the party said in a statement.

According to the Public Opinion Foundation, seventeen percent of Russians believe that the law may infringe on atheists’ rights, while 45 percent say it will not.

Moskovskiye Novosti newspaper polled Moscow parishioners earlier this week to find out what they think about the bill.

“A religious person’s feelings can’t be insulted and one shouldn’t be punished for it – the Lord will do it,” pensioner Irina Fyodorova said. At the same time, she supported penalizing Pussy Riot, because “it was too outrageous.”

A survey by the Levada Center national pollster carried out in April found that 56 percent of Russians think Pussy Riot received the penalty they deserved; twenty-six percent said the punishment is too severe, while nine percent said they see no reason for prosecuting the band’s members at all.

“We should strike a happy medium,” said Fyodorova. “When I’m insulted, it’s one thing; it serves me right maybe. But if many people are insulted at a time, the state should interfere.”

Another parishioner, Yury Oskin, said he sees no point in the bill.

“If one insults someone else, let the Lord judge them,” he said. “Under our law, a citizen can already be held liable for a personal insult. The law is the same for everyone, and no groups should be singled out. Otherwise, you’ll need separate laws for insulting workers, traffic police, and so on.”